Marshall Brown's Center of the World Friday; Rolling Down the River with the CSO on Sunday


. . . three scenarios — one political, one economic, one cultural — for the future of the Chicago Circle. The heart of legendary architect Daniel Burnham’s 1909 Plan of Chicago was the Civic Center, located on the city’s cardinal axis, Congress Parkway. Burnham’s Civic Center was never built. Instead of his monument to democracy, we have the Circle Interchange – third worst traffic interchange in America, responsible for the loss of 25 million driving hours per year. Marshall Brown’s show at Western Exhibitions, his first at the gallery, Center of the World, Chicago will feature models, photomontage, and a trio of original videograms that project histories of Chicago’s future as the center of the world.

The show will be up until July 20th.  The Western Exhibitions Gallery is open Wednesdays through Saturdays, 11 a.m. to 6:00 p.m.

Sunday: Shall We Gather at the River? (With orchestra and chorus)

A number of threads of our most recent writings converge this Sunday, June 9th, when musicians of the Chicago Symphony Orchestra board Chicago's Leading Lady (the ship) at Michigan Avenue and float down the Chicago River (Handel anyone?) to Chinatown's Ping Tom Park, where Johnson and Lee's new boathouse is scheduled to be dedicated.  Here's what the boathouse looked while under construction early in May . .  . 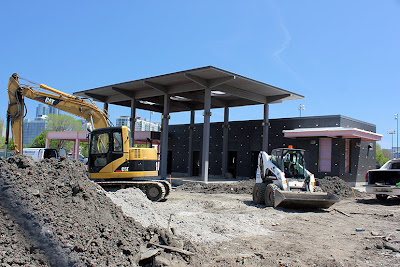 It's one of four Mayor Rahm Emanuel is building throughout Chicago, including the Clark Park boathouse by Studio/Gang that we wrote about earlier this week, with the firm also designing another boathouse on the south branch near Ashland.  Johnson and Lee is designing the other two boathouses - one at River Park, and the one at Ping Tom, which DNAinfo.Chicago is reporting to be 2,485 square feet, a fraction of the size of the boathouse at Clark Park, which is designed for larger rowing team vessels.  (There's also a new field house going up at Ping Tom designed by Booth/Hanson)

When the CSO players reach Ping Tom, they will be joined by no less than CSO Music Director Riccardo Muti, who is scheduled to lead the Chicago Children's Choir in Verdi's Va pensiero, part of a sequence of performances that begins at 3:00 p.m. with music from artists including Corky Siegel, Eddy Clearwater, the Civic Orchestra Brass, and the Mucca Pazza marching rock band. 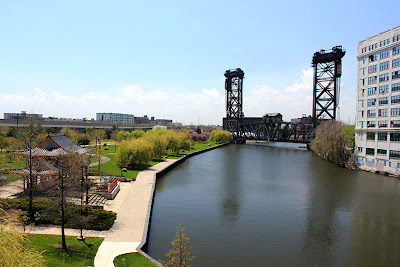 It's the concluding event in the CSO's River Festival, featuring nearly a dozen programs incorporating musical compositions referencing rivers and water, including a number of local premieres and new works commissioned from Mason Bates and Orbert Davis. 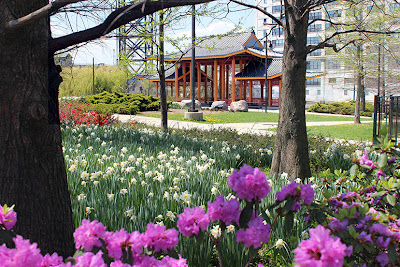 According to Friends of the Chicago River, Chicago Water Taxi, whose new service to Goose Island we just wrote about yesterday, will we ramping up service on Sunday for its Ping Tom Park route with arrivals scheduled every 15 minutes.