As James Turrell transforms Wright's Guggenheim, a look at his Chicago Skyspace

Well, here's another great show I'll never get to.
The Guggenheim Museum in New York has turned its iconic, Frank Lloyd Wright designed spaces over to James Turrell, and the artist has transformed them with spectacular installations of color and light.  The continuous ramp rotunda has become Aten Reign,  described by The New Yorker's Peter Schjeldahl as “six evenly spaced, concentric ovoid rings, smoothly clad in white plastic” which increase in size, from the rotunda's skylight almost down to the floor. “An orchestration of slowly shifting colored light, from unseen L.E.D. fixtures between the rings, suffuses the atmosphere with one ravishing playoff another another: breathable beauty.” 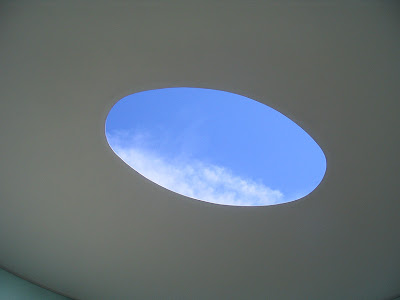 I really need to figure out a way to get away more, but since, for the moment, it's not possible, I have to settle for being put in mind of Chicago's own James Turrell work, Skyspace, which opened at Roosevelt and Halsted in 2006.  Turrell was on hand for the dedication, which we wrote about here.  It's a 43-foot-in diameter pavilion, with a 26-foot high ceiling pierced by a central oculus designed to create the illusion of “celestial vaulting - the illusion, when viewing the sky without a horizon line, that the sky is aligned with the plane of the ceiling.” 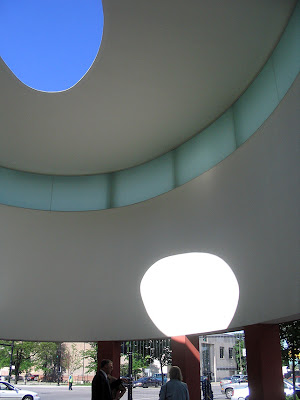 What makes Skyspace distinctive is how, try as it might, it's not an entirely controlled space.  The setting, a juncture of urban formation, keeps insinuating itself inside.

Next door to the west is the St. Francis of Assisi Church, dating from 1875. 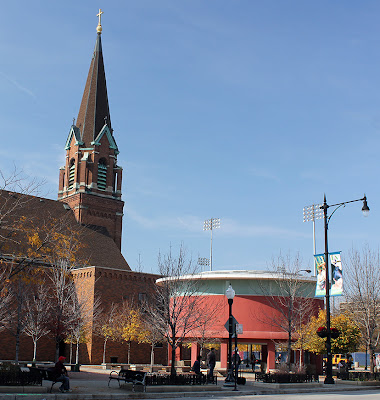 The spiritual qualities inherent in Skyspace finds a counterpoint in the church rituals that spill over onto the Earl Neal plaza in which Skyspace is placed. 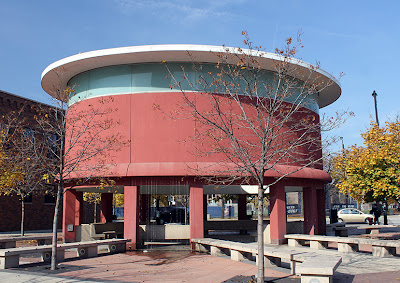 Skyspace finds itself mediating between a working class neighborhood that has been largely effaced, and the great urban machine that has superseded it, the relentlessly expanding presence of the University of Illinois's Chicago campus. 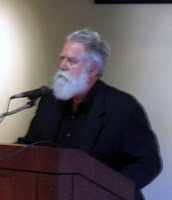 I went to this space a couple years ago for sunset and while the curtain of water was running, the light program never came on. Does it only run on certain days? Has it been running recently? I would like to return to experience it with the light program.