Infinite Curve: Viñoly's Chapel at the U of C Center for Care and Discovery

When we wrote about the new Logan Center for the Performing Arts at the University of Chicago at the time of its opening last fall, we included this view towards of Rafael Viñoly's Center for Care and Discovery, the $700 million, 240 bed hospital whose massive bulk looming over the U of C campus we described as looking “like a beached ocean liner”.
In Viñoly's defense, he was working with the University's program, which stressed the kind of supply-chain empire-building that is a dominant force of our time in general and in health care in particular.  As I learned from a generous and informative tour from Viñoly Architects Project Manager Joe Cliggott earlier this month, Viñoly's exterior design incorporatea a number of features to break up the monolithic quality, as well as a highly creative approach to making the hospital experience more - well, hospitable - for care givers, patients, and visitors alike.  I hope to cover these in more detail in a later post. (And also the new Carol Ross Barney daycare center you can glimpse in the bottom right of the photo below.) 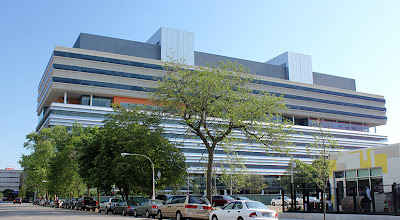 While during my tour I learned any number of things that impressed me, today I want to take a look at the one feature that surprised me, and in a very positive way.  It's the chapel on the seventh floor ‘Garden’, the sky lobby encompassing waiting and support rooms for visitors, which are not only gracious, but provide some of the most spectacular views in Chicago. 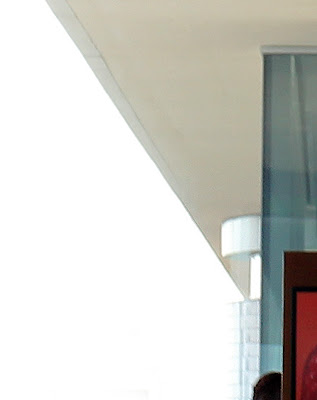 The chapel is a counterpoint to so much of the rest the design.  In the larger design, the right angle, save for rounded columns, predominates, relentlessly.  In contrast, in the chapel, the right angle is banished, even in its expression on the exterior of the building. 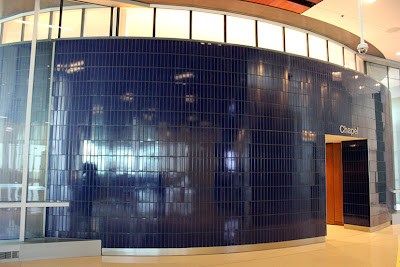 The wall facing the lobby curves.  The entrance door is not immediately apparent.  You look at the wall and place your bets, but you know immediately when you find it, by the feel on your hand of the thin, hidden strip of metal near the edge, whose cool, smooth texture is a shock to the touch compared to the texture and temperature of the otherwise omnipresent wood.  The cherry wood veneer is in striking contrast to the celebration of metal, glass, and applied color in the rest of the hospital. 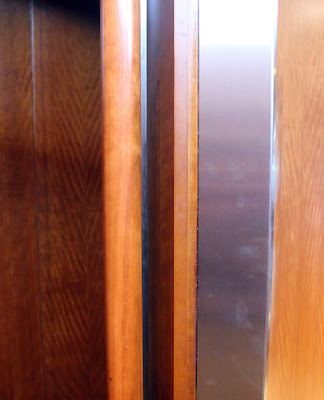 Once you enter the chapel and close the door behind you, you are in interfaith room completely unmarked by any religious imagery.  The objects - whether they be sacred or seating - required by individual religions are stored behind another hidden door in a small closet that bumps into the room as if stretching the unbroken banding of wood.  Above that wood, a band of white wall and a narrow continuous strip of clerestory windows wraps around the top of the room. 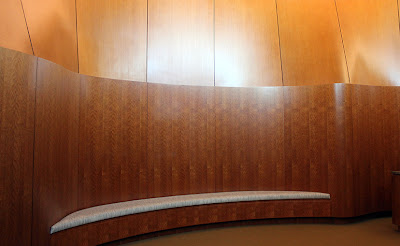 There are no right angles in this room.  If you can imagine away the rude but code-required Exit sign, it's as if you find yourself in  a space where you don't how you got there, or how you'll get out.  The acoustic seal creates one of those places where you actually ‘hear’ the silence.  Occasional sounds from the lobby filter in, muffled and distant, as if you're hearing them underwater.  Although the placement of the closet ‘bump‘ subtly demarcates a visual focus towards the ‘alter‘ area, the chapel, ultimately, is an ever continuous space.  No beginning.  No end.  It just ‘is’.  A sanctuary, filled from above with celestial light.  A glimpse of eternity, claustrophobic, until you give yourself over to its serenity. 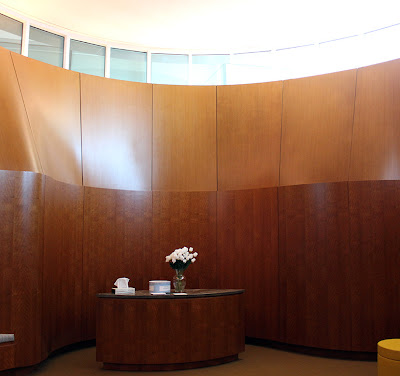 In alternating succession, the experience of Viñoly's chapel can be both unsettling and comforting.  I like this space. 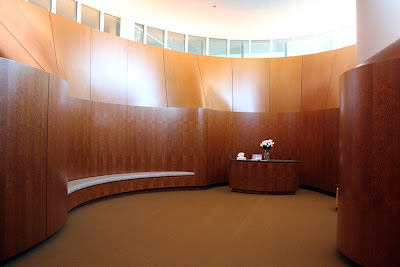