And the Oscar Goes to . . . Divergent - Production Design: Walter Netsch and Helmut Jahn

If you were watching the VMA awards this weekend, you probably saw this early trailer for the Shailene Woodley/Theo James/Miles Teller/Kate Winslet film Divergent, scheduled to be released next March.  The film - and the Veronica Roth novel on which it's based - is set in a dystopian future version of Chicago.  Yeah, I know - the more things change . . .
It was only this past June that we showed you the Divergent village that had been constructed on the long empty Grand Central Station site in the South Loop, which you can see in the film with pretty much the same architectural backdrop as in our photograph . . . 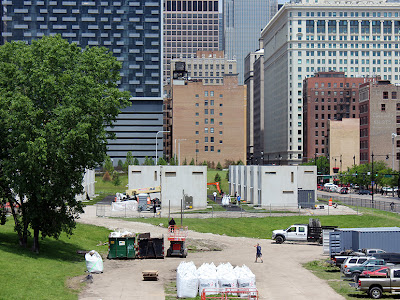 Apparently, if you want a glimpse of what the future will look like, you have only to hop down to 57th and Ellis on the U of C campus, where the library power combo of Walter Netsch's Regenstein and Helmut Jahn's Mansueto are standing in for the headquarters of what I'm betting is some kind of evil empire. 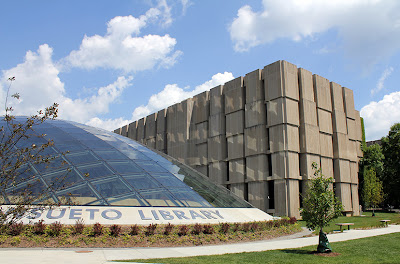 Which of Divergent's five factions do they house? Abnegation, Amity, Candor, Dauntless or Erudite?  And - whatever faction - will there be field theory and archi-neering?  And cake?

(If you can identify other Chicago locations in the trailer, please let us know in a comment.) 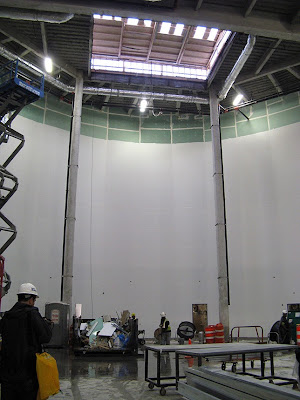 Helmut Jahn's Mansueto Library at the University of Chicago
(Click on time for permalink) 2:39 PM

The sanctuary of 17th Church of Christ, Scientist appears early in the trailer (twice, I think). The room with the arched windows seems to be the ballroom at the east end of Navy Pier (location of the Ferris wheel too).