By now you've probably all encountered the story of  Dutch artist Florentijin Hofman's giant inflated Rubber Duck, which, according to Hofman . . .


knows no frontiers, it doesn't discriminate people and doesn't have a political connotation. The friendly, floating Rubber Duck has healing properties: it can relieve mondial tensions as well as define them. The rubber duck is soft, friendly and suitable for all ages!

The Duck began its journey in Osaka, Japan in 2009.  Wildly popular with the public, it then made its way from locations from Sao Paolo to Sydney to Hong Kong, where the it suffered a deflation that left it little more than a flat yolk.  The duck is now said to be fully recovered and on its way to a lake in Beijing's Garden Expo Park for a September 6th debut.
Hofman expressed outrage when his Rubber Duck was replicated by shanzhai knock-offs throughout various Chinese cities, but Shanghai, in the throes of an unprecendented heat wave, has responded in its own way. A team of artists headed by Han Beishi were hired by ad company Bestknown to create the “roast duck ferry”, as featured on designboom.
Of course, Chicago is no stranger to rubber duckies, as earlier this month we dumped about 45,000 of them into the river for the annual Windy City Rubber Ducky Derby, benefiting the Illinois Special Olympics. 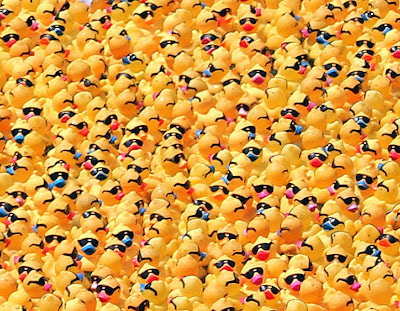 It all raises the questions: what would a Chicago version of Shanghai's cooked duck ferry look like?

The answer is hanging in the window at Sun Wah.