Enter the Blob, Hammock on the Lawn - Activate Union Station, only through Monday

Chicago was built by the railroads, but Union Station is the last survivor among what was once six great rail terminals still in use, and we only have half of it.  The great concourse that gave New York's Penn Station a run for its money was demolished in 1969 for the spectacularly mediocre skyscraper now known as Fifth Third Center.
The Great Hall, however, remains.  It's one of Chicago's grandest public spaces, but many consider it underused, among them The Metropolitan Planning Council, which posed the question: “How can we bring Chicago's Union Station back to life?”  The result was their Activate Union Station competition, and the two winning entries are now up at Union Station, but only through Monday, September 2nd.

TrainYARD is from a design team including participants from Krueck + Sexton, Space Architects+Planners, and IIT woodshop manager Michael Gillhouse, who talked with us for the above video.

Each competitor was awarded just $5,000 to carry out their vision, so volunteer time and donated materials played a big part in the installations.  In the case of TrainYARD, that mean borrowing picnic tables from Logan Square and newspapers from the Chicago Tribune to support the seating. 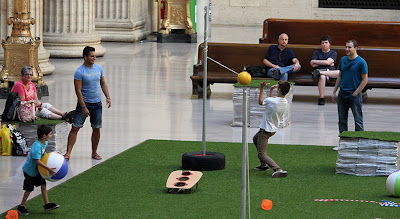 The idea was to create a park landscape within the monumental stoneyard that is the Great Hall.  Both times I visited, TrainYARD was a popular rest stop for beach ball, tetherball, jumping rope, rotating hoops, lounging in a hammock or getting a kick nap. 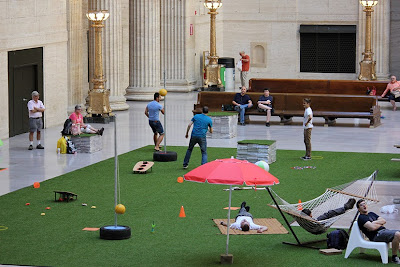 Blah Blah Blob!, the other winning entry, actually creates its own structure out of neon-colored nylon fabric.  It's a collaboration between the Kent State Cleveland Urban Design Collaborative and Latent Design, the firm of Chicago architect Katherine Darnstadt, who talked about the project for our video.
Blah Blah Blob!'s home base is on the riverside plaza of the aforementioned Fifth Third Center, where's its visible to commuters approaching the station from blocks away. 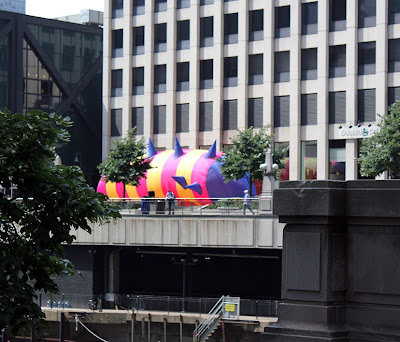 The Blob's material is water resistant, but if there are high winds it relocates to the Great Hall. 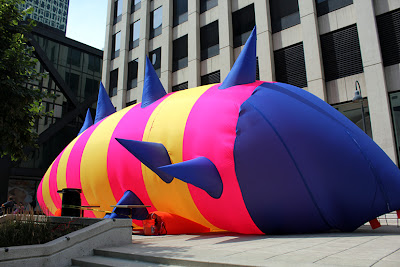 As with TrainYard, a lot of volunteer time - at least 200 hours - went into the project.  Darnstadt says . . .


It was a total 100% pop-up sweatshop . . . We taught people how to sew, instantly.  We did a little bit of it at the Art Institute, in the Fashion Department, because they have tons of space.  We did a couple days there and that was great to be able to cut all the patterns that we needed, ‘cause we just need space to lay it out.  And we sewed in my kitchen. 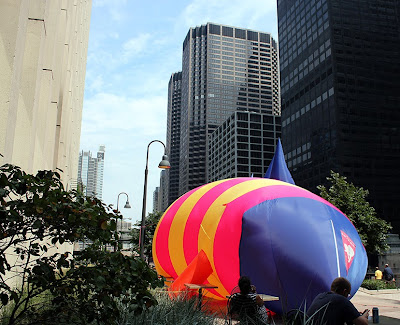 The Blob (the name is a sly allusion to blob architecture) has to be inflated and set up afresh each day. In the controlled environment of the Great Hall, Darnstadt can do it, by herself, in 30 minutes.  Outside, she's dealing with wind, downdrafts and pedestrians.


This morning, at 6:30 - 7:00 in morning, as I rolled this out, people are walking over it because they really have their routine and just want to walk across the plaza come hell or high water.  Tomorrow (that is, today, August 27th), we're going to be inside Union Station, actually be able to hang out with the TrainYARD folks.  It helps just to watch each other's project and how they interact with one another.

From set-up to break-down, it's a twelve-hour day.  “Married to my blob,” is how Darnstadt describes her current status. 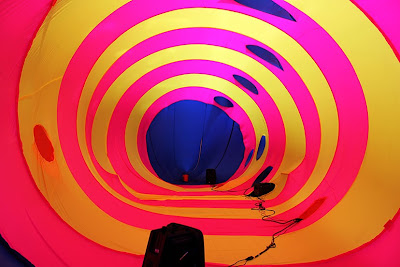 The Blob is both an object and an inhabitable space.  When I was at Fifth Third Plaza yesterday, it was being set up for a noon-time Zumba class.  Tuesday is a 5 p.m. Fit kick, Wednesday noon-time Pound - check out the entire schedule here.  (And remember that today, Tuesday the 27th, you can both installations, side-by-side in the Great Hall

I can't really speak to how Activate Union Station will scale up to more permanent interventions, but the two competition winners are friendly twerk counterpoints to the sober, monumental architecture.  Whether your weapon of leisure is Zumba, tetherball or just lounging around, it's well worthwhile to pop into Union Station before the installations come down after Monday, September 2nd.

hey this post is awesome thank you!! can you change the link to space? the link is http://www.spacearchplan.com, 2 of us work at SPACE architects + planners and i just want to make sure they get credit because we met at our office a lot.

Im sending the link to everyone in the office right now