It's still there, the Brown Line trains still speeding by.  It's one of a number of old factories along Ravenswood Avenue and the Northwestern tracks on Chicago's North Side.  Many follow the same pattern: broad loft floors, and above the entrance a tall tower - usually with a clock - that hid a water tank at the top for fire protection.

The factory was built for the Bell & Howell Company, one of those great Chicago corporate success 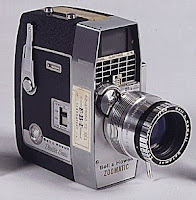 stories that have faded in memory.  It was founded by two projectionists in 1907, when Chicago was still a center of motion picture production.  Bell & Howell was one of the pioneers in standardizing the emerging film industry on 35mm, coming up with a device to create the perforations that drove the film through the projector.  They made the hand-cranked cameras that became the standard of quality for early film studios.  In 1934, Bell & Howell introduced the first light-weight 8mm movie camera, helping create the market for home movies.  During World War II, 2,000 workers made gun cameras and other military equipment.  The Bell & Howell camera you see to the right was used by Abraham Zapruder to capture the assassination of John F. Kennedy.

In 1949, they made 30-year Charles Percy President of the Company.  He came to be known as the “boy wonder” - increasing sales by a factor of 32 and the number of employees by 12 - before beginning a career as liberal Republican (remember those?), losing a race for governor to Otto Kerner - who would later be sent to prison - before winning three terms to the U.S. Senate.   After Percy left, the company had the usual trajectory of lost opportunities.  It bought - and sold - what's now the Proquest database of newspapers.  It acquired Devry Technical Institute, but spun it off in 1987. In 2000, it was split into separate companies, with soon-to-be-bankrupt Kodak acquiring the company's scanner business in 2009.  In 2011, Böwe Bell & Howell itself went bankrupt and was sold to Versa Capital to pay off the debt.  That same year, the corporate headquarters was moved to Durham, North Carolina, where the company has had a plant since 1997.  About 250 employees are left.

The Chicago firm of Pond and Pond were Bell & Howell's architects. On May 1, 1927, Irving K. Pond celebrated his 70th birthday by doing a somersault on the roof of the YMCA Building. Bell & Howell sent its cameraman to record the event. 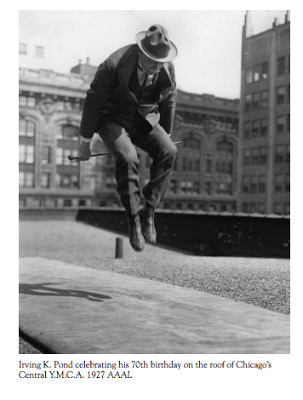 In 1926, Pond & Pond had designed the striking Bell & Howell factory building at 1801 West Larchmont, a couple blocks south of Irving Park, and added an annex in 1931. 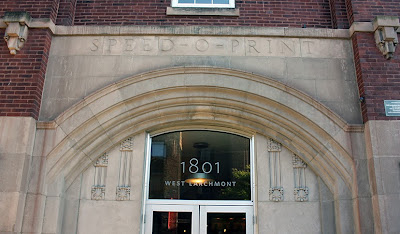 The factory on Larchmont shows a stripped-down version of Pond and Pond's Arts and Craft ornament.  The top of the clock tower is spare and striking.  Most striking, however, is the use of continuous strip windows.  Pond didn't quite have the nerve to have them turn the corner, but in all other ways, the Bell & Howell factory is a very modern building. It may now be the kind of unappreciated, long-lived architecture people walk - or ride - by almost without seeing, but it sticks to the retina as one of the landmarks that moors the community, even in the mind's eye. 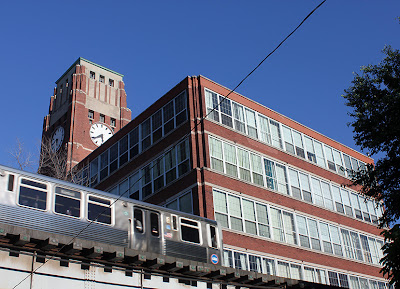 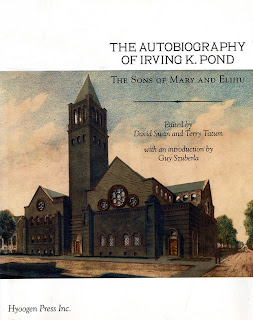 Out from the Sidelines:  The Autobiography (and Confessions) of Irving K. Pond.