Visting North Bridge? Who's that great looking Babe (or . . . goat) you're Having Coffee With?

In 1997, Thielbar and Fugard's 1929 Art Deco McGraw-Hill Building on Michigan Avenue was made an official Chicago landmark.  In 1999 it was demolished, after an acrimonious battle with developer John Buck, who also engineered the destruction of Mies van der Rohe's Arts Club Building for his marzipan 600 North Michigan.  Tribune architect Blair Kamin was a forceful advocate for the McGraw-Hill's preservation, while the paper's editorial board aggressively greased the skids for its destruction.  Sound familiar?
Over 4,000 limestone panels of the McGraw-Hill's facade were stripped away, the building demolished, and the panels then re-attached to the steel frame of the new hotel structure that was erected in its place. Restored on the Michigan Avenue facade were the striking reliefs, drawing on classical mythology and the zodiac, that were the work of 20-year-old, Chicago-born artist Gwen Lux. 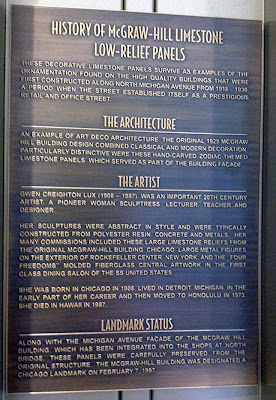 After the facadectomy, a number of panels were left over, including four of the reliefs.  Last October, the Permit Review Committee of the Commission on Chicago Landmarks unanimously approved “relocation of four Gwen Lux panels displayed in Grand Avenue Atrium to the Rush Street enclosed bridge.”  (I'm beginning to think I'm the least observant person in the world - I used to eat lunch at the Shops of North Bridge mall a couple times a week and I can't remember ever noticing these very large panels in that atrium.)
So now, you can grab a table next Nordstrom's, check email and sip coffee while getting intimate with one of Lux's elegant Zodiac-inspired artworks.  These six-foot-high panels may never have meant to been seen this close-up, but Lux's reliefs add a touch of class that lifts this light-filled space out of its generic drabness.  Before it was an anywhere; now it's a destination: “Meet me at the Aquarius Lounge”.

Bill said...
This comment has been removed by the author.
1:57 PM