Architectural Destruction as a Political Act: The Demolition at La Casita

It was an impressive act of urban theater - the kind of “shock and awe” exercise usually deployed by an army of occupation.   The focus of Saturday's blitzkrieg demolition - a small, ramshackle fieldhouse - seemed almost comically underscaled for the passions it evoked.
It had originally been constructed in the 1920's  to support the playground next to Whittier Elementary School, at 19th and Wolcott.  Over time,  the open structure was enclosed and became a community center for the surrounding neighborhood.

In 2009. the Chicago Public Schools undertook a structural study and found that the field house needed to be demolished.  About the same time, by pure coincidence, the CPS was negotiating to turn the playground over to the Cristo Rey Jesuit High School, which was offering to spend $1 million to create a soccer field on the site, to be shared with Whitter students.

The CPS announcement that the fieldhouse would be razed evoked a firestorm.  Parents and neighbors occupied the building and staged a sit-in, demanding the structure be saved and converted into a library.  Whittier was among 160 CPS schools without one, and the activists received donations from across the country to set up a library within the field house, now named La Casita (“The Cottage”)  After 43 days, the CPS capitulated, agreeing to save the building, with the parents charged with finding a way to finance repairs.

In 2011, a new mayor and a new CPS CEO started to make noises that they didn't feel bound by the previous administration's agreement.  Which only served to re-activate the parents.  They kept up the pressure, and in June of 2011 Jean-Claude Brizard wrote a letter to the Whittier Parent Committee stating, “The Whittier field house will not be demolished.”


Architecture for Humanity Chicago spent six months coming up with a detailed renovation plan for the fieldhouse, while the Whitter Parent Committee worked with local officials to come up with $564,000 from two area TIF tunds, and another $200,000 from the State of Illinois. 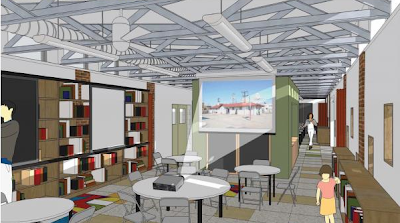 Time passed.  The TIF funding the parents thought they had lined up proved to be vaporous. (Target Corp., however,  got a $5 million+ subsidy to build a new store nearby.)

Whittier School, itself, got a million dollars TIF funding earmark to create a library in the old building.  However - as reported by The Reader's Ben Joravsky - after disputes between the CPS and the parents, no librarian was ever hired, the library was never completed and the room - one of few at Whittier with air conditioning - is now a cooling center.

The parents never signed a proposed $1-a-year lease for the fieldhouse, and money for the rehab never materialized.  So it should not have come as shock to neighborhood activists that La Casita again found itself on the hit list.  How it was handled, however, was an object lesson in Chicago politics.

With no warning, around 6:00 p.m. last Friday, crews showed up to La Casita, chased young dance class students out, and began preparing the building for demolition.  It wasn't until the structure had already begun to be dismantled that CPS spokesperson Becky Carroll issued a statement to the press: “Among the district’s top priorities is ensuring that our students have access to a safe and nurturing learning environment. The Field House at Whittier Elementary School has been deemed unsafe for occupancy over the last three years due to its advance state of deterioration and threat of the roof caving in . . .”  This, of course, is the same claim of imminent collapse that the CPS has been clinging to since 2009, even as the building, itself, had endured without incident.

The late-Friday press statement is the standard operating procedure by which bureaucrats bury coverage of controversial actions by waiting to make the announcement until the time when there are the fewest number of reporters on hand to cover it.  In the case of La Casita, this usually reliable tactic didn't entirely work. 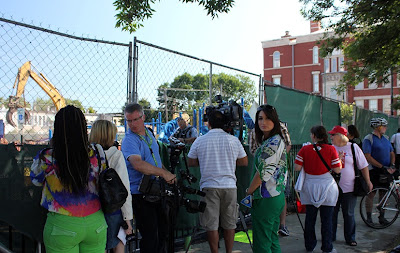 Word spread.  Activists continued to gather throughout the night, and by Saturday morning the street was filled with reporters and TV trucks. 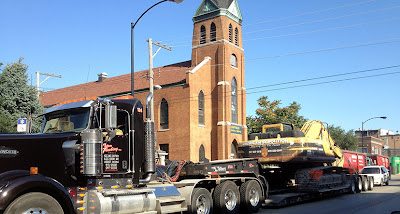 The surrounding streets became a staging area for intimidating equipment - one big bulldozer on a truck blocking the street in front of the fieldhouse, another around the corner, along with a big spare claw.  Two huge trucks stood ready to take away the debris. 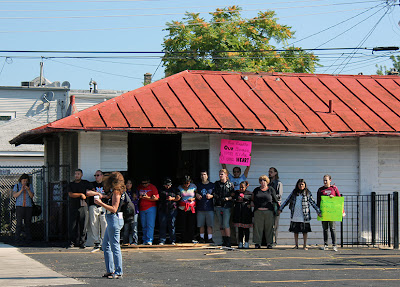 A few dozen protesters chanted and circled the site.  To allow people to see what was going on, the green netting along the fence that had gone up along the perimeter was torn back, letting spectators observing what was happening with the group of activists standing outside La Casita to block the bulldozers.  Police formed a cordon and began arresting protesters to get them out of the way. 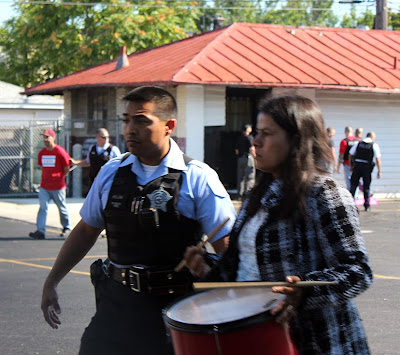 To angry screams, the big bulldozer rolled off the carrier truck and smashed through the chain link fence. 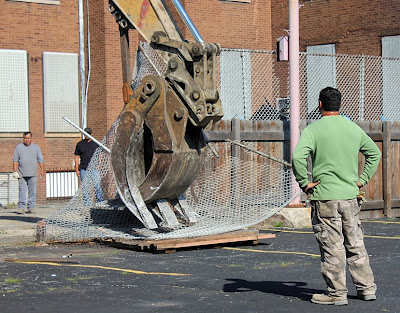 It moved quickly to the western end of La Casita and grabbed hold of the roof, clawing the building apart. 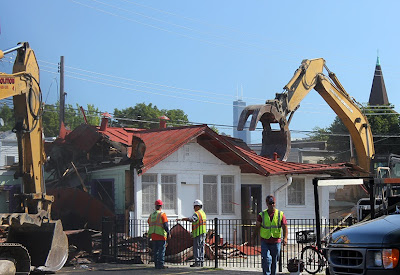 It was quick work, especially when the second bulldozer rolled in to take on the building from the East.  Gone in sixty minutes, La Casita was history. 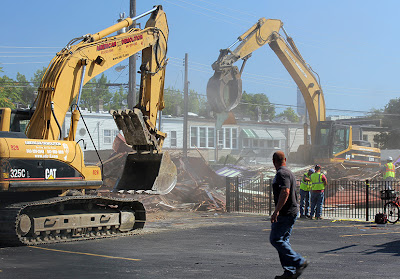 The CPS couldn't be bothered with the niceties of  legal procedure.  It never got a demolition permit, and the required State of Illinois form was so rushed it identifies the owner of La Casita as the Elementary School District of south suburban Lansing, Illinois.  The Friday CPS announcement was accompanied with a rush-job rendering that looked like it had been done on a Windows 95 version of Microsoft Paint.  It showed what is to replace La Casita.  A lawn, a basketball court, a play area that looks pretty much like the present equipment pushed off into a corner. No replacement community center; no new place where suspect residents might congregate to learn to dance. 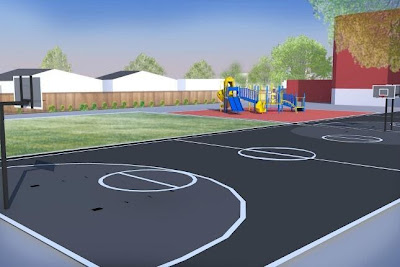 Beginning Friday evening, none of the people who ordered the demolition were anywhere to found.  Certainly not Mayor Rahm Emanuel, who's become an unparalleled master at being nowhere near Chicago when bad stuff hits the fan.  The office of local alderman Danny Solis, best known for being a rubber-stamp for whatever whims whomever the current mayor might be may have, was at first said to share the community's concern.  His office held out the offer of a meeting Saturday morning, located to get the activists far away from the La Casita site.  After the building was demolished, Solis's office finally said he was out of town on vacation. 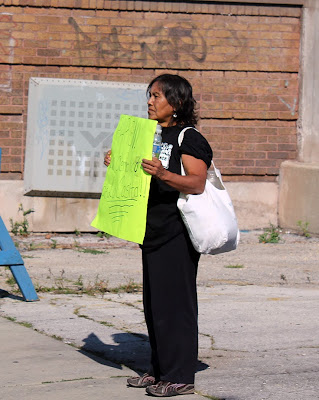 He bravely returned on Monday, however, to reveal to the media he actually knew about the demolition on Thursday, but said nothing, because it would have encouraged protests.  Solis said it was all just really about the safety of the children.  It's always about “the children”.  Whether it's Mayor Richard M. Daley trying to ram an underground children's museum into Grant Park, or Rahm Emanuel closing 50 public schools while funneling cash to charters, or Solis signing off on La Casita's death warrant, politicians love to use kids as human shields to cover their machinations.

What happened on Saturday wasn't about the children.  It was about sending a message.  The 2010 sit-in gave people accustomed to being powerless a taste of what it's like to control their own future.  Lives were changed.  In the last election, Danny Solis was forced into a runoff. 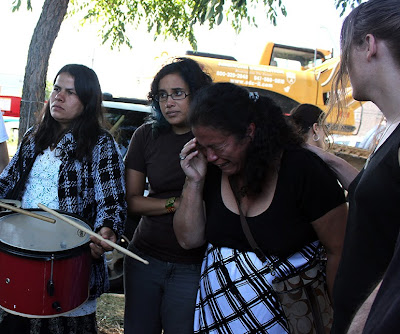 Saturday's display was all about putting those people back into their place. It was about reminding them how decisions are really made in Chicago: not by them but for them, by the people who make clout their life's work.  The smart people, the clever people. the insiders who know who to court and who to hire to make the system work to their advantage.


It was a great show.

Like the midnight raid on Meigs Field - but in daytime.

Rahm's true colors become even more vibrant. The wishes of the local community mean absolutely nothing. City Hall is omnipotent.