[Update: January 2, 2014]  Our worst fears realized?  John Byrne of the Chicago Tribune is reporting that two of the four finalists to “manage” orphaned neighborhood plazas are major outdoor advertising companies.  Making Way For People, or For Billboards? Is Rahm selling out still more civic space for quick cash?


People Plazas: how could anyone question such a concept?  It sounds as American as Apple Pie.

And I'm sure the intentions are good.  Yesterday, the City of Chicago's Department of Transportation released a request for proposals - from companies or organizations - to “provide certain management services for City plazas,” ultimately 49 in all.

The purpose is to find a qualified consultant to provide services to activate, maintain and, if necessary, upgrade the City plazas . . . CDOT expects the Selected Respondent to provide the Services specified herein as well as other opportunities that present themselves to showcase the plazas and raise funds for future programming and maintenance, which will when become part of their Services. 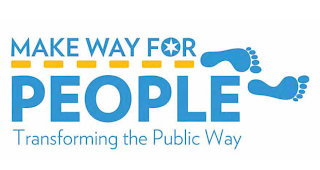 . . .  One of Mayor Rahm Emanuel's strategies for improving Chicago's neighborhoods is to create place public spaces that cultivate community activities and cultural events in Chicago's neighborhoods through placemaking.  The ‘Make Way for People’ program in general, and the People Plazas program in particular, are ways that CDOT is executing the Mayor's strategy by supporting innovation in the public way through the opening of Chicago's streets, parking spots, plazas and alleys to new programming opportunities.  The Municipal Marketing ordinance allows for revenue generation in support of these strategies and goals.  The People Plaza program is intended to have the additional benefits of improving street safety, promoting walkable communities, and supporting economic development for Chicago's local business and neighborhoods.

The RFP includes information, a photograph, map and aerial view for each of the 49 sites.  They're spread out among six planning districts all across Chicago, although, for some reason, nine - nearly 20% of the total - are in the 25th ward of Alderman Danny Solis.  They are very diverse.  The largest - at 62nd and Drexel - is over 41,000 square feet; the smallest - at Montrose and Broadway - is only 436.  Altogether they add up to nearly 400,000 square feet of public space, and an average of 8,600.  (Three of the listings have no size information at all.) 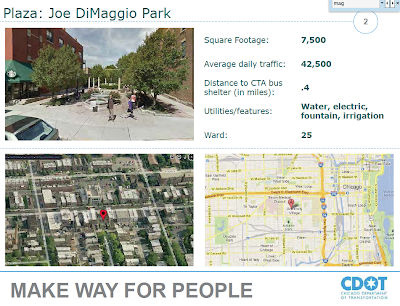 Traffic estimates range from 650 people a day at Ewing, Indianapolis and 100th, to over 42,000 at Joe DiMaggio Park in Little Italy.  For the 43 sites listing traffic information, the daily average is over 21,000 people.

Ten of the sites include fountains.  In some cases there are sculptures.  Well over half - 28 - have no utility connection of any kind.  Some are basically closed-off residential streets.  Another is actually Carol Ross Barney's Vietnam Memorial along the Chicago River.  This is a sacred space.  Exactly how would we want it “enlivened?” 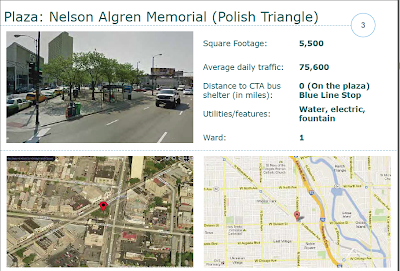 Many -such as the Nelson Algren Memorial at the Polish Triangle - are clearly neighborhood squares, and would seem to be naturals for development.  Others are more eccentric and challenging. Ohio Place Park is essentially a traffic island isolated between racing lanes of traffic off the Ontario feeder ramp to the Kennedy expressway.  Another is the space around Burnham and Root's gate - the last remnant of Chicago's Union stockyards - which is now stranded within an industrial park.  Several of the sites, especially in Englewood, are vacant lots.  Another in Pilsen is beneath elevated railroads. 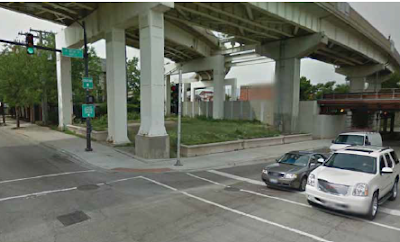 What common denominator will a winning respondent find between such sites?  In reading this RFP, it appears that this isn't a case where a neighborhood institution can “adopt” a single plaza in their community.  Each applicant must come up with a plan for a minimum of 10 sites in the first year, and expand to at least 30 within three years.

In that first year, the city will provide a $50,000 “programming reimbursement”, which looks like it's not per site, but to be split among all the installations.  For the first two years, the city will continue to be responsible for providing the curtain level of maintenance to the plazas.  Beyond that, the winning entities will be on their own to come up with revenue - from sponsorships, advertising, grants, donations, retail establishments or basically anything else they can think of.  From this they will have to fund programming, year-round maintenance, capital improvements and upgrades, plus sufficient cash for “Revenue generation for the City.”

Who is this RFP targeted toward?  Is there a preferred vendor already in the wings for whom it has been tailored?   Or is it a fishing expedition just to see what - if anything - is out there? 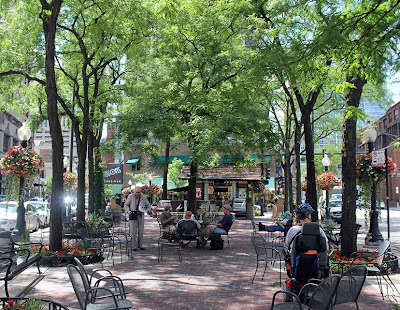 I'm put in mind of very different conditions for two Near North parks.  Neither of them are in the RFP, but they are actually smaller than many of the Peoples Plaza sites.  Mariano Park, in the heart of the Viagra Triangle, has been able to achieve continued success served by only this small pavilion designed by Frank Lloyd Wright alum Birch Burdette Long in 1895. 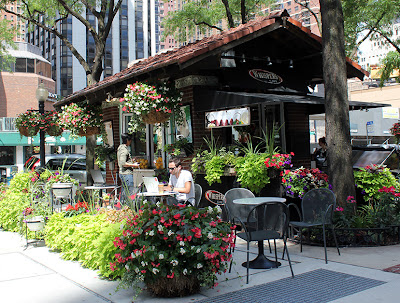 Just a few blocks away there is Connors Park which, until recently, was a charming, if derelict, greenspace. 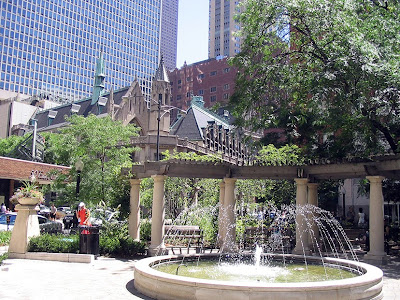 For reasons that are beyond me, despite the fact that Connors park resides in one of Chicago's more affluent areas, across the street from luxury condo buildings and the striking Sofitel Water Tower hotel, the city was unable to keep the park free from vandals and the homeless.  It chose instead to turn over the large end of the triangular park to Argo Tea, for the construction of a tea shop as large and intrusive as Burdette Long's kiosk is modest and limited. 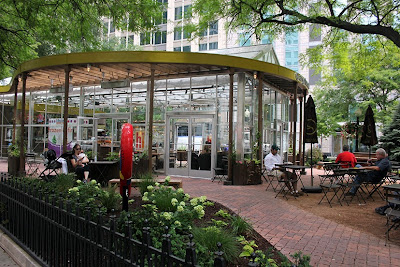 If you walked by, would you think these tables and chairs were part of a park open to all, or a private seating area for a commercial facility?  Connors has gone from being a welcome oasis of greenery in a densely built area, to a chain teahouse with a pinched slice of park attached to it.

These are the central questions about CDOT's Peoples Plazas RFP:

Given how many of the sites are deeply challenging, sometimes in inhospitable areas, what kind of company or organization is going to respond to the RFP?  What's in it for them?  And what are the city's expectations? To break even while providing programming?  Or this seen as another way to plug massive budget deficits by essentially selling off civic assets?

The RFP talks about involving local community groups, but it also seems clear that a selected manager - and not the community - will ultimately control the sites.  In this context, will the community eventually in conflict with an outside organization controlling its public spaces, or perhaps even charging for their use?   To be clear, many of these sites are currently godforsaken wastelands.  There's nowhere for them to go but up.  Others, however, are already integral parts of their community, even if underutilized or commercially underachieving. 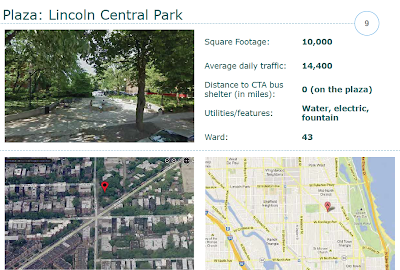 Perhaps most importantly, can any organization responsible for so many very different sites in so many unlike areas of the city find success without standardizing their response?  Think JCDecaux bus shelters or Divvy bike stations.  No matter where they're placed, they are largely identical.  Will the People Plazas truly benefit the people, or commercial interests?  Will they reflect and enhance the neighborhoods in which they are placed, or undermine that character by moving it ever closer to an efficient but generic sameness?

Proposals responding to the RFP must be received by CDOT no later than Noon, CST, September 30th.  There will be a “Pre-Proposal Conference meeting” at 3:00 p.m., September 10th, at the Department of Finance, 33 N. LaSalle, 7th floor, room 700.  Attendance “non-mandatory, but strongly encouraged.”  You can also submit questions via mail - e, snail or fax - directly to CDOT's Janet Attarian through 3 p.m., CST, Friday, September 6th.

Vast potential....for unintended consequences. Thanks, Lynn, for a well written piece and an important 'heads-up'