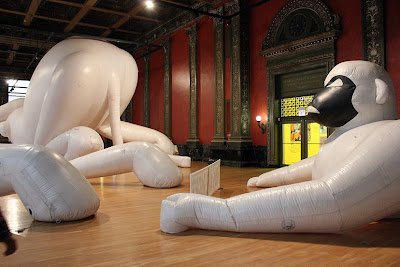 Time travel fantasy:  Bring architect A.H. Coolidge back to life, blindfold him, and bring him up to what was the Reading Room of the Chicago Public Library he designed.  Remove blindfold.  Google Glass his reactions.  Put video up on YouTube.  Watch the views pile up.


There have been many interesting things set against the bordello-red classically ornamented Yates Gallery, but probably none have offered a more surreal contrast than the three giant inflated monkeys that are one part of The Happy Show, where graphic designer Stefan Sagmeister . . .


. . . not only tests the boundaries between art and design, he often transgresses it through his imaginative implementation of typography. The Happy Show offers visitors the experience of walking into the designer's mind as he attempts to increase his happiness via meditation, cognitive therapy and mood-altering pharmaceuticals. “I am usually rather bored with definitions,” Sagmeister says. “Happiness, however, is just such a big subject that it might be worth a try to pin it down.” Centered around the designer's ten-year exploration of happiness, this exhibition presents typographic investigations of a series of maxims, or rules to live by, originally culled from Sagmeister's diary, manifested in a variety of imaginative and interactive forms.
To contextualize the maxims that appear throughout the exhibition, Sagmeister has gathered the social data of Harvard psychologists Daniel Gilbert and Steven Pinker, psychologist Jonathan Haidt, anthropologist Donald Symons, and several prominent historians. A 12-minute segment of the Happy Film, a feature length exploration of whether it is possible to train the mind the way we train the body, will also be on view.

While the bulk of exhibition is in the Yates Gallery, the density is in the adjoining exhibition hall, where yellow - the color of happiness? - predominates, through considerations of happiness through matters physical, intellectual, emotional, philosophical and sexual.  It's where you can participate in a poll of happiness by selecting a gumball.  And the giant monkeys?


And I expect you'll all agree
That he was right to so decree.
And I am right,
And you are right,
And all is right as right can be!
-W.S. Gilbert, The Mikado 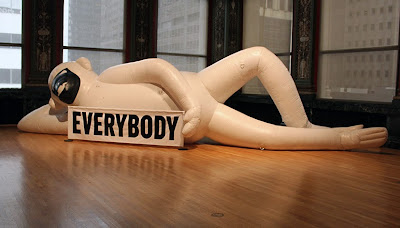 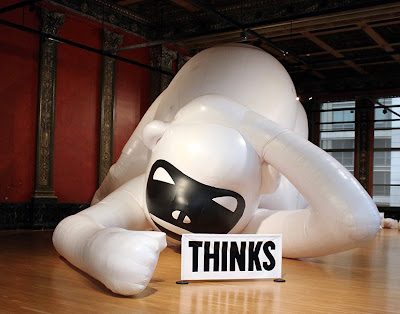 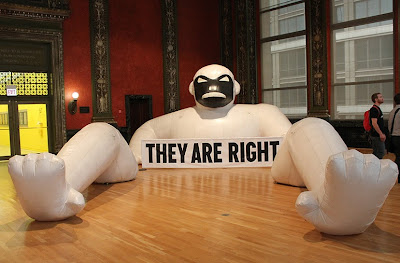 The Happy Show runs at the Chicago Cultural Center through Monday, September 23, 2013

More on the architecture of the Cultural Center, as backdrop to another intriguing exhibition:


I Am Curious, Morbid - an unnerving show finds the perfect architectural setting.