The first thing you notice, from a distance, is the 90-foot-high bell tower.  Where you're expecting a pitched roof, a skylight has been inserted.

And then, if you walk down 19th street towards Peoria, you notice something else, the church that the bell tower is attached to is a head without a body . . . 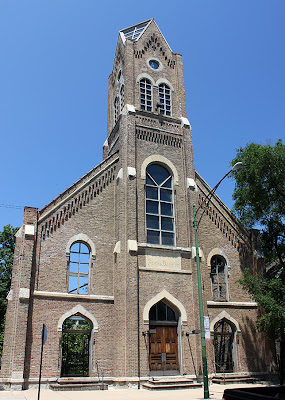 The  Zion Evangelical Lutheran Church was founded in 1850.    According to a story by the Trib's Rick Kogan, this building dates back to the 1880's.  A post on the Chicago Architecture Blog say the congregation sold the structure in 1956, after most of the original German congregation moved out of its east Pilsen neighborhood.  The church remained closed after a 1979 fire the gutted the interior.  In 1998, a severe windstorm knocked down the walls. 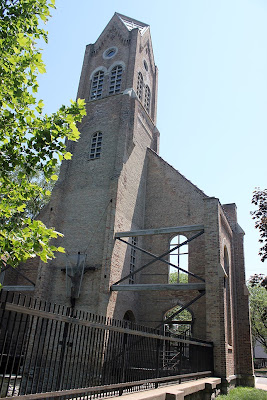 The property was purchased by Pilsen developer John Podmajersky, who originally planned to turn the tower into 10 small studio spaces, with the artists sharing the garden where the sanctuary once stood.  That's the name for what remains now, "The Sanctuary".  The statue of Christ remains high on the back of the bare brick wall, a burnt offering. 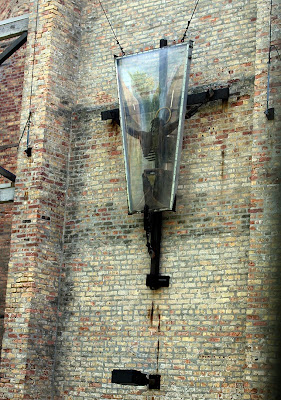 The foundations of the lost building remain, square and squat and isolated within the lawn, a linear stonehenge with its own aura of mystery. 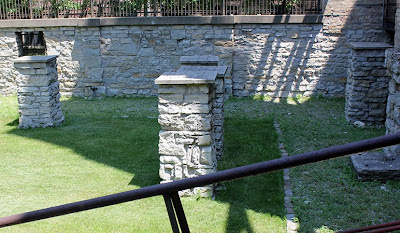 Does anyone know if this space is rentable?