It all ties into one of Richard M. Daley's patented 99-year privitization deals. In 2006, a consortium led by Morgan Stanley paid Chicago $563 million for a 99 year lease of the four parking garages along the city's lakefront.  $208 million went to paying off the bonds for Millennium Park, and $65 million  was earmarked for rebuilding the East Monroe Street garage.

The East Monroe Street garage is important because it's beneath what was Daley Bicentennial plaza, completed in 1976, a 20-acre park south of Randolph and east of Columbus constructed over former Illinois Central railyards.   The rebuilding of garage included fixing leaks that threatened to inundate the parked cars with water.  The reported cause of those leaks was the deterioration of the old membrane that separated Daley Bi from the roof the garage beneath.  The only solution?  Tearing out the park - removing every flower, ever lawn, every tree, every last inch of earth in order to be able to replace the membrane. 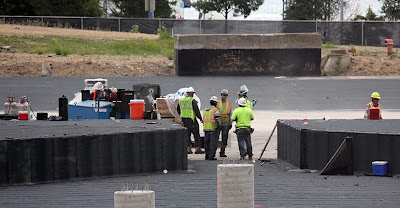 That event was seen by Richard M. Daley as the perfect opportunity to jam a new building for the Chicago Children's Museum onto the site.  After that effort collapsed, the city turned to noted designer Michael Van Valkenburgh to come up with a new design for the replacement park, now renamed to honor the late Maggie Daley. 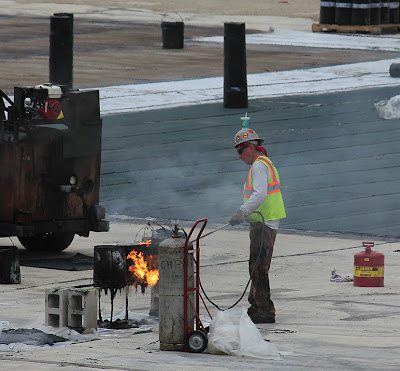 We're at the midpoint of that project.  Right now, the new membrane is being put down over the concrete roof of the garage, and it's expected it will result in longer-lasting, better performing seals.  According to Grant Park Conservancy's Bob O'Neill . .  . 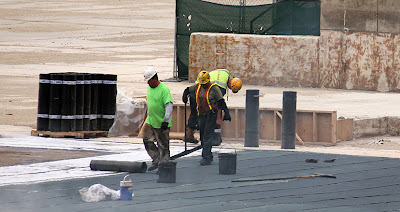 The new waterproofing is a hot applied monolithic membrane system that has a series of protection layers and drainage layers above it.  The benefit of this system is that it has minimal seams because of its hot-applied installation.  There are several drainage measures in place to convey water off of the roof before it even comes in contact with the membrane itself.  As a result, a much longer lifespan is anticipated from this system than the previous installation.

Which would be really good, because it would be a scandalous loss to have to rip out Van Valkenburgh's new park after only a few decades. Maggie Daley Park is now scheduled to open in October of next year.  The Tribune recently reported that the city was about to award a $42.5 million contract to Walsh Construction to construct the park, which now has an estimated cost of $55 million.  That compares to the roughly $35 million Chicago Park District Director of Development Gia Biagi said was available from the lease proceeds. Biagi talked about private funding making up the difference. The Park District has given Maggie Daley Park its own website.  It includes regular updates, and two cool webcams that give wide-angle views of the site, letting you follow the progress of construction in real time. 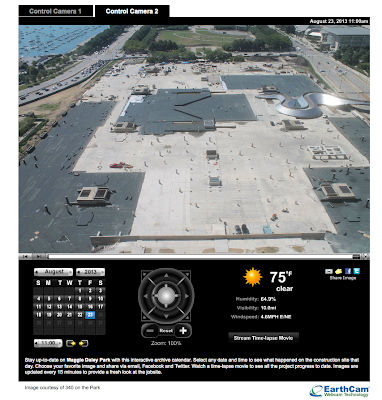 A Portrait of Mayor Daley's "Nowhere"

Privatization and the Public Interest (a report from Illinois PIRG)