A Modest Proposal: Abolish the Commission on Chicago Landmarks

In November, the Commission on Chicago Landmarks was presented with a report calling on them to rescind the preliminary landmark designation they had given
Bertrand Goldberg's Prentice Hospital earlier in the same meeting.  Then, the Commission had voted unanimously to designate Prentice.  Only minutes later, all of those same commissioners completely reversed course and voted to de-designate.  All but one, Commissioner Christopher Reed.

Well, we can't have that, can we? Reed is now gone.  At the beginning of yesterday's monthly meeting, Chairman Rafael Leon announced that Reed had resigned, along with long-time Commission member and Chicago real estate legend John Baird.  Baird was also the Commission's Secretary, and it was announced, in a rare display of honesty, that the new Secretary will be Andrew Mooney, an ex officio Commission member who, as Commissioner of Housing and Economic Development, is actually the person calling the shots. 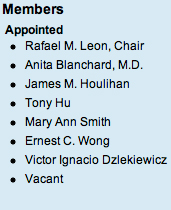 bothered to fill one of the two vacancies.  The sole new Commissioner is Victor Ignacio Dziekiewicz, whose name is misspelled “Dzlekiewicz” on the Commission's own website. If you were a cynic, you might be tempted to suspect that the primary attraction of the appointee was a name that placates two of the city's key ethnic constituencies - Hispanics and Poles - in a single person.  (Actually, Dziekiewicz was born in Argentina.)  To Emanuel's credit, Dziekiewicz is an architect, which makes him a lonely exception among the mayor's appointments to a Commission whose mission is all about architecture.  Dziekiewicz's firm DesignBridge, has done work on four schools for UNO, the politically connected - and increasingly controversial - operator of Chicago charter schools.  (Six degrees of Juan Rangel?)


Judging from my brief observation of him at yesterday's Commission meeting,  Dziekiewicz, despite designing his firm's website in Flash, seems to be a good guy.  This is underscored by the fact he has also volunteered to take on serving on the Commission's Permit Review Committee, which is real grunt work - a time-consuming, often thankless commitment.

Really, male or female, they're all good guys, those who serve as Landmarks Commissioners, and I'm not just saying that in a Shakespearan Marc Anthony kind of way.  Every Commission member is a distinguished professional in their respective field, with a long, proven record of achievement.  But while this may be why they were chosen for appointment, it's ultimately not why they are there.

They are there as window dressing.  They are there, ultimately, to lend their public reputation to provide cover to any controversial decisions the Mayor may make.  It doesn't happen often.  Most usually, there's a routine basking in the general good feeling of affirming proposals unstained by controversy.  But once every great while, the Mayor asks the Commission to take an action that betrays their primary job description of protecting Chicago's priceless architectural legacy.  And then they're expected to take the bullet, and find a way to put a good public face on the Commission on Chicago Landmarks destroying a Chicago landmark.

Other than this, the Commission on Chicago Landmarks serves no purpose.  It has never - as in, not once - saved a landmark building that the Department of Development, or a connected developer, wanted destroyed.  Once, just once, in the case of the Farwell Building, the Commission failed to provide a majority for demolishing  a designated landmark.  The Commission simply called another meeting, of dubious legality, to reverse the vote.  Only one Commissioner, Edward Torrez, had the courage not to reverse his earlier “No” vote.  At yesterday's meeting, Torrez - surprise, surprise, no  longer a Commissioner - was on the outside, arguing for Prentice's preservation.

It's a long-standing truism that when a project has two people who always agree, it's time to recognize that at least one of them is probably unnecessary.  In government, unfortunately, the impulse is often the exact opposite.  Those at the top of the power chain tend to want to convert everything below them into an infinity of mirrors, perfectly reflecting each other reflecting whatever images the ruler wishes to project.  It's called message control.

1.  Abolish the Commission on Chicago Landmarks.
2.  Create a three-person appointed Permit Review Committee, to work with staff to approve or reject permit requests.
3.  Have hearings on preliminary landmark designation go directly to the City Council's Landmark Preservation Committee.
4.  Create the position of Chicago Commissioner of Landmarks, appointed for a two year term.  Although chosen by the Mayor, this would be a quasi-independent position, like an Inspector General, which, while closely co-operating with both the Mayor and the Commissioner of HED, would be expected to be, not merely a perpetual echo of Mayoral whims, but chief advocate for Chicago's priceless architectural legacy.
4.  The staff of the Commission, which does all the incredible, invaluable work that the Commissioners pop in once a month to act on,  would remain as is.  The Assistant Commissioner/Director of Historic Preservation would continue to work closely with the HED Commissioner, but would be a direct report to the Commissioner of Landmarks.
5.  Update the Historic Resources Survey, which covered buildings only up until 1940, to incorporate potential landmark buildings through the close of the 20th century.
What would these changes achieve?
1.  It would eliminate a Landmarks Commission that has been a deliberate body that does no deliberation, a rubber stamp serving no purpose.
2.  It would streamline the landmarking process.
3.  It would create something that is completely missing from the landmarks process, something that is needed desperately:  a recognizable public face for the process of landmark protection, and an ambassador and persistent advocate for the city's globally renowned architectural heritage.
4.  It would address the current imbalance in HED's effective hijacking of the landmarking process.
5.  It would update a Historic Resources database that will soon be two decades old.

I expect these proposals to be universally unpopular.  To those on the winning side on the battle to destroy Prentice, it will just seem like sour grapes.  To preservationists, it will be upsetting the apple cart (to keep the fruit metaphor going)  of a process that has become, if not satisfactory in results, at least consistently familiar.  Preservationists keep telling me the value of keeping Landmarks firmly tied to HED is that it is not marginalized but closely aligned with the true root of power.  But I have to suggest that at this point, believing  that the current alignment does anything other than make it easier for HED to crush sound preservation policy has become, given the history of recent years, akin to believing in the Great Pumpkin.

Each time an essential Chicago masterpiece is lost - the Garrick Theater, the Chicago Stock Exchange - we say, “never again.”  And a decade or so later, the nightmare is repeated.  I can't say that the changes I propose would have saved Bertrand Goldberg's Prentice Hospital.  I can say that, as the Landmarks Ordinance and the Commission near the half-century mark, we should be taking a long, critical look at how they have functioned, and how they can be improved.

Got a better idea?  Let us know.

Bravo, brava, and a standing ovation.

The Landmarks Staff needs to go too.
To many "sweetheart deals" are being streamlined to their relatives. Good ol Chicago nepotism alive and well in the Landmarks Staff!
The entire Commission and process is a joke.

Unfortunately, it is all politics and money. None of them actually care about our Chicago architectural history. Shameless. The whole lot of them.