Finishing the River Walk - Introduction and Block One: The Marina

More details emerged Wednesday on the plans for Phase II of the Chicago River Walk.  At a public meeting at the Chicago Architecture Foundation, Chicago Department of Transportation Project Manager Michelle Woods offered a presentation - which she promised would soon be on line - and she was joined by architect Carol Ross Barney and  Sasaki Associates Principal Gina Ford.
Ross Barney told me that the final six blocks of the River Walk were designed as a procession that goes from more structured, at the denser, eastern end, to more natural, at the less dense - at least for now - western end.

“A typical boardwalk,” said Woods, “has a consistent look from one end to the other.  On the main branch of the Chicago River, every moveable bridge is unique, every one is different and separate from each other.  So we took this as an opportunity to create a different experience as you went from bridge to bridge and we used different types of river themes to come up with those different options.”
Right now, the finished river walk ends at State Street.  Planning and design for the next phases is 90% for the segment from State to LaSalle, with the last segment, from LaSalle to Lake Street, still in the early conceptual stages of design.  Cost for the overall project is estimate at $90 to $100 million, with funding still to be put in place.  Woods said the city was still working on receiving an invitation to  to apply for a federal loan program most often used for revenue producing projects such as tollways, with the funds paid back over a thirty year period.  If everything falls into place, construction could begin as early as this summer.  Drawing on experience from the construction of completed blocks of the river walk, time of construction is estimated at 15 to 18 months per block. 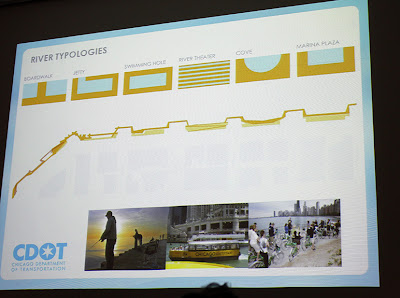 Perhaps the key component to the River Walk is making it continuous, as opposed to the current obstacle course.  “It's a river climb now,” said Woods.  “You have to climb the stairs, cross the street, and then descend a set of stairs to get down to the next section.”  To alleviate this, connection walkways, like the one recently built under the Wabash Avenue Bridge, have to be constructed to take each segment of the river walk under the bridge, itself.
Each segment has been given its own name.  The first, from State to Dearborn, is called The Marina.
It will contain 1,900 square-feet of retail space; and a 3,000 square-foot plaza area for Al Fresco dining.  The tops of the tall-backed benches double as the surface for the bar.  “You have steps,” says Woods, “that go down, so you can sit there and enjoy the water very closely.  This might also be a spot for recreational boat docking.”

As I mentioned yesterday, there are still a lot of questions about the River Walk development, but there's also an enormous potential to moving the Chicago River towards its full potential as an invaluable civic amenity, which we'll pick up on as we discuss the other blocks of the design in future posts.
(Right now, I have to start getting ready for the Landmarks Commission session on Bertrand Goldberg's Prentice Hospital, today - Thursday - beginning at 12:45 in the County Board Room of the County Building 118 North Clark.  Open to the public.)

I can't wait for the River Walk to be extended. I often use it from Michigan to State on my way home.