If you're an aquarium chondrichthye, do you consider skateboarding a form of torture? Not that matters.  It's not the skates of the Shedd that are about to be lured to a new home in Grant Park, but their mammalian cousins.


On Wednesday, February 27th, at the meeting of the Grant Park Advisory Council, preliminary plans will be presented for a combined skate park and small outdoor performance area, to be built on the park's south end, around 11th street. Since the new facility is referred to as being ‘below grade’, I'm assuming it's going to be in the area south of the late, epically derelict 12th Street Metra Station. 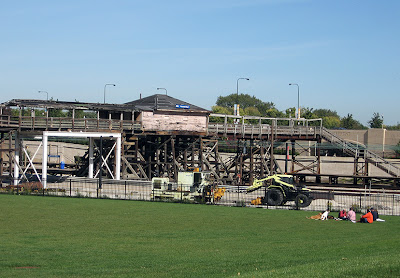 Design work is reportedly still be to be completed. The new skate park is going to be built with $1 million in TIF funds, with a projected fall 2014 completion date.  It will replace a smaller temporary facility along 9th Street that's been there for a number of years.

The last time we wrote about a new development in this part of Grant Park was back in 2005, where a bunch of hucksters from Palm Springs were promoting a Hollywood-styled Chicago Walk of Fame alongside the Metra tracks from Balbo to 11th street.  It was going to eventually have up 400 or more three-foot granite stars honoring the greats of Chicago past and present, and it wasn't going to cost Chicago a penny.  Which it didn't, because, thankfully, nothing ever came of it. 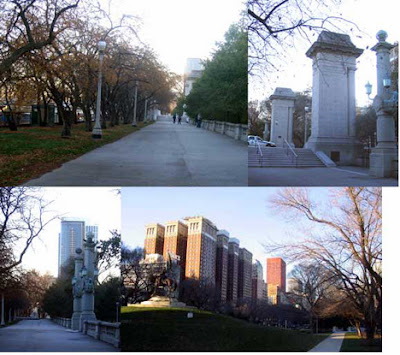 Having been evicted from their usual location at the Daley Bi Fieldhouse during major construction, Wednesday's meeting will be held at 6:30 p.m., over two miles away, at the Northerly Island Fieldhouse, 1521 South Linn White Drive  (Head past the Aquarium on Solidarity Drive and take a right.)  The meeting is also scheduled to include nomination and election of officers, and an update on Maggie Daley Park.

That's a big sledding spot that's about to go away

Is there any public or entrance fees for Grant Park?

Sledding??? Go find a hill. I prefer a $1000000 skatepark thank you. Something Chicago has needed for years. There is only one decent skatepark in Chicago, and nothing that would be on par with a serious competition style site. I just hope they don't F it up again...