Thursday's monthly meeting of the Commission on Chicago Landmarks, dominated by the battle to save Bertrand Goldberg's Prentice Hospital,  was an shared exercise in the theater of the absurd.  Across nearly four hours of testimony from dozens of speakers on both sides, Commissioners pretended to be considering the testimony of the preservationists, and the preservationists pretended to believe that the commissioners might actually be listening.

Commissioner Andrew Mooney acknowledged that Northwestern University, which owns and seeks to destroy Prentice, has no plans to break ground for new construction on the site until 2015, at the earliest.  Commissioner James Houlihan was one several commissioners who seemed to suspect that the biggest snow job of the day wasn't the one that had just started to fall outside the County Building, where the meeting was held, but the dishonest and evasive campaign Northwestern waged to gut Prentice's landmark protection.  “I have this suspicion,” said Houlihan, “that  Northwestern has placed before us a false question.” 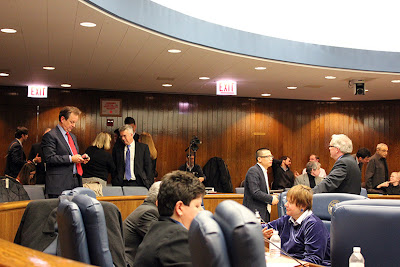 No matter.   You dance with the guy who brung you, and for the landmarks commissioners, that guy was Mayor Rahm Emanuel, to whom they all owed their appointment.  And Rahm's intentions were never a secret.  He was working with Northwestern to evade landmark designation for Prentice almost from the moment he took office.  Last October he went public with the imperial thumbs-down. 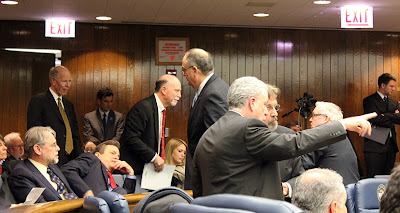 “Will no one rid me of this troublesome building?” Rahm asked, almost off-handedly, to no one in particular. But the commissioners heard.  They bellied up to the barre, and danced the dance that was expected.  They first voted, unanimously, to accept an economic development report that called for  allowing Northwestern to demolish Prentice, and then, for good measure, voted unanimously to rescind the preliminary landmark designation that they had voted for, also unanimously, just last November.

The intended audience for this charade was not even in the room.  The object of this afternoon's performance was to persuade Cook County Circuit Court Judge Neil Cohen that his concerns about the perversion of due process in the November meeting, when the Commission first voted for designation and then rescinded it only minutes later, has now been made all better, so can he can finally lift the stay he put into effect last December and let demolition proceed.

The Save Prentice coalition issue a quick response:


We are disappointed that the Commission on Chicago Landmarks voted to again reject its unanimous preliminary landmark recommendation for Prentice. By the standard of Chicago’s Landmarks Ordinance, the Commission made its decision based on improper considerations in an improper forum.

The Coalition's attorney Michael Rachlis indicated in his testimony that the validity of the Commission's actions will continue to be contested in court.  Former Chicago Director of Central Area Planning and preservationist Jim Peters - who had authored dozens of the same kind of  “HED” reports himself - testified that the economic development report submitted to the Landmarks Commission inaccurately addressed the key questions of Prentice's relation to the city's Comprehensive Plan, as well as Prentice's effect on its surrounding neighborhood.

If Judge Cohen lifts his stay, all indications are that Northwestern will proceed swiftly to smashing Prentice into dust.  The result will not be their much heralded new billion-dollar research lab, but a vacant lot, right across the street from two huge blocks that have also been vacant for over five years, with no definite plan for construction yet in sight.  In a burned-out neighborhood, vacant block after vacant block would be considered a major planning failure.  On the empty wastelands of the Northwestern campus, where the very gravel is marbled with insider clout, it's just business. 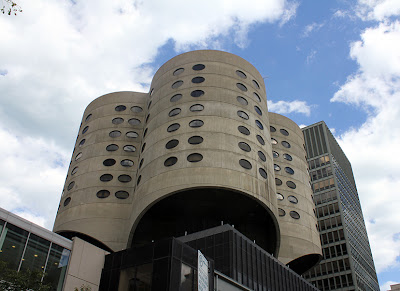 Another sad day in Chicago.

Doesn't Northwestern have a Head of Sustainability or environment or something? Wouldn't this be a HUGE sustainability issue?

It's a hideous building. I'm sorry, but I won't be sad to see it go. It's also private property. People should mind their own damn business. I'm sick of hearing people whine about this.

Jeff: The "private property" meme is tired. This is a civilized society. We have laws (enacted through a democratic government created by the poeple) that govern the actions of private persons, private companies, private property, etc. If any person could just do what they wanted, whenever they wanted, however they wanted, it would NOT be a civilized society. Please try to consider your grade school civics lessons before posting such drivel.

NU does in fact have a sustainability director: one Rob Whittier
http://offices.northwestern.edu/detail/686

Ion: "Please try to consider your grade school civics lessons before posting such drivel." Insulting people for their opinions is rude. You can disagree, but that's just immature. Grow up.

Everyone loves the Prentice Women's Hospital so much. Will that at least sell (or give away) parts of it?

Interesting point, Matt. As you know, the upper landing of the Art Institute's great stair is a gallery of artifacts of demolished Chicago buildings, but most usually, the objects are applied ornament. In a building like Goldberg's, the idea was to create an organic whole, without applique. If Prentice is demolished, what remnants could be displayed?

What is it immature to point out that the repeated drum of "private property" is meant only to crowd out argument, as opposed to engage argument?

Why is it not also immature to say that "people should mind their own damn business" or "grow up"?

There are always those who attempt to change the topic, as opposed to engage in the true debate of whether the City of Chicago will be forever worse off as a result of the irreversible destruction of a great civic and architectural landmark. I say it is.

Nice post, Thanks for your very useful Information, I will bookmark for next reference