Shall We Gather at the (Chicago) River?

Tonight, Wednesday February 6th, the Chicago Department of Transportation is holding a public meeting to formally present plans for the completion of the Chicago Riverwalk.  The session will be at the Chicago Architecture Foundation, 224 South Michigan, from 5:30 to 7:00 p.m.

A funny thing happened when they rebuilt the east-west segment of Wacker Drive, the double-wide, double-deck roadway that runs along the south bank of the Chicago River.  For cars, it was finished completely in 2002.  For people, well, the attitude was that they'd get to it eventually.  No one had bothered to get the money for finishing the lower riverfront promenade, and it's remained in a raw, abject state ever since, mitigated only by a series of rudimentary summertime cafes. 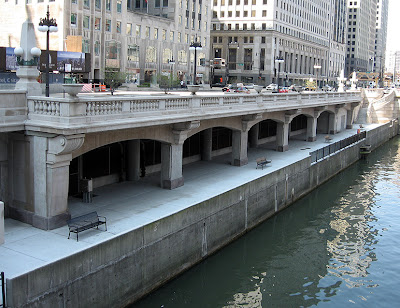 Things began to look up a bit with the 2005 completion of Carol Ross Barney's Chicago Vietnam Veterans Memorial.  In 2009, Ross Barney carried the riverwalk forward to State Street, with a striking reflective panel under Wabash that captures the waves of the river . . . 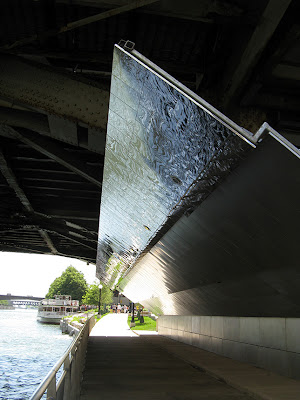 . . .  and a new one block segment to State where the actual riverwalk was shunted to the periphery, in favor of a massive outdoor patio for a restaurant that, entirely coincidentally, was best known for running full page newspaper ads with pictures of local politicians . . . 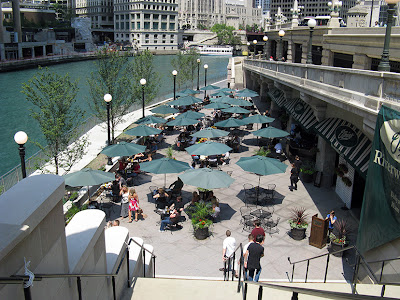 In 2009, Skidmore Owings and Merrill issued a comprehensive Chicago Riverwalk Main Branch Framework Plan, which provided co-ordinated analysis and proposals for the entire stretch of the river from Wolf Point to the Lake.  It's scope was sweeping, from completion of DuSable Park to the East, to a public market under upper Wacker, to a “Confluence District” along all banks around the split of the river into north and south branches at Wolf Point.

The new plan works hard to balance formal and informal, with a wide range of concepts and functionality.  Each block has its own concept: The Marina (from State to Dearborn); The Cove (Dearborn to Clark); The River Theater (Clark to LaSalle); The Swimming Hole (LaSalle to Wells); The Jetty (Wells to Franklin) and The Boardwalk (Franklin to Lake).  Anticipated functions include kayak rentals, docking space, fishing, fountains, gardens, and educational installations on the ecology of the river.  (If it's finished in time for President Obama to come by for the dedication, maybe they'll even be skeet shooting.)
As far as the public disclosure is concerned, the new proposals appear to exist primarily as a series of pretty pictures.  If detail and specifics on the order of the SOM plan exist anywhere on the internet, I've yet to find it.  Where is the night lighting in the renderings?  Where are the back-office operations - storage, public restrooms, etc?  I've already mentioned how the O'Briens cafe overwhelms its segment of the riverwalk from State to Wabash, but in the final six blocks, food service appears to end in the easternmost segment, and even there it's all but invisible in the rendering.
Where SOM had their Confluence District, the new plan seems to be everyone for themselves. If there's any co-ordination between what the city wants to do along the south bank, and how it will relate, visually or functionally, to what Hines Interests is planning for the TIF-funded park at their new River Point office tower at 444 West Lake, or what the Kennedy Interests is planning for their mega-development at Wolf Point, I've yet to find any reference to it.
At the time of the Mayor's announcement last October, there was no funding in place for the project's estimated $90-100 million cost.  According to the press release, Emanuel “has charged CDOT to find creative ways to finance the construction of the remaining six blocks from State to Lake .”  It looks like the U.S. Department of Transportation is the most likely mark from which to shake the loose change.
So many hopes.  So few details.  Maybe tonight.  Again, it's a public meeting, so you can check it out for yourself, 5:30 to 7:00, at the Chicago Architecture Foundation, 224 South Michigan. 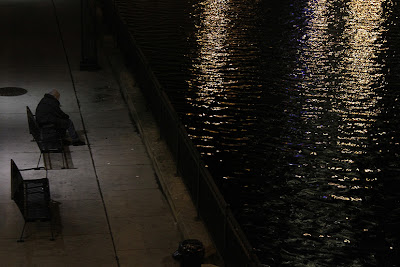 Interesting proposals. I truly hope that some development comes to the riverbank. Walking along upper Wacker recently, it's shocking to see how much deterioration has happened to the decorative elements - benches, balustrades, columns. Some have been clearly smashed by errant vehicle traffic, others appear to be disintegrating from salt, pollution, lack of maintenance, etc...

Very good photo , i really like your article , interesting ... keep update your blog , thank you