Lohan on Mies, Burns on what's under Block 37, plus Architecture and Emotion fuse in extraordinary I Am Cuba

This week, on the February Calendar of Chicago Architectural Events . . .

Tomorrow, Tuesday the 12th, begins with the Chicago ACE Mentor Program Lunch, and ends at the Block Museum in Evanston with Dirk Lohan talking about his grandfather's Mies van der Rohe's Legacy and the Chicago Skyline.  Wednesday, the 13th, lunchtime at CAF, Joe Burns of Thorton Tomasetti will provide A Look Under Chicago's Block 37, including structure, foundations, and the unfinished CTA superstation, while in the evening Arup's Chris Luebkeman lectures on Design for the New Normal in the Next Decade for AIA Chicago.  The Structural Illinois Engineers of Illinois has a day-long seminar on Design of Low-Rise Reinforced Concrete Buildings at the UBS Tower on Thursday.

There are still dozen of arresting items to come on the February Calendar of Chicago Architectural Events.

Capturing Architecture as it's Lived:  I Am Cuba 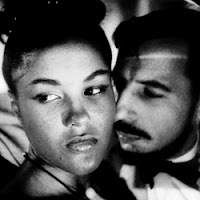 Meanwhile, over at the Gene Siskel Film Center, Tuesday the 12th at 6:00 p.m., is your last chance to see one of the most remarkable films ever made, Mikhail Kalatozov's I Am Cuba, which transcends its intentions as a propaganda film that made it a flop in both Cuba and the U.S.S.R during its initial 1964 release.

First of all, I Am Cuba is a time capsule that captures Cuba at the cross point between the decadence of the mob-run luxury resorts under dictator Fulgencio Batista and the evolution into a vassal state of the Soviet Union, the period of hope that saw the creation of a native revolutionary architecture in the never-finished National Arts School, and the descent into the imposed degradation of now crumbling Soviet-style pre-fab housing towers.

It's all captured in stunning, hyper-expressive black-and-white cinematography by Sergey Urusevsky, including two continuous-shot sequences that put even Orson Welles' opening of Touch of Evil to shame.  The result is one of the most profound explorations of a built environment that you will ever encounter, culminating in this amazing sequence in which the camera - in one take - moves down, through, up, in and over the streets and buildings of Havana as it follows the funeral procession of a martyr through city streets.  It is the most amazing intersection of architecture, movement and human emotion as you're ever likely to see.

Next week, a true cornucopia awaits: National Engineers Week, Leos Carax at the Siskel, and films in 70mm at the Music Box.  Stay tuned.