So, a Dutchman walks into a Lego store and says to the clerk, “I'd like a million and a half Legos, please.  Just white ones, no offense intended.  And can you help me to the car?”

This is probably not how it all came down when MVRDV and The Why Factory collaborated with the Hong Kong Design center to create nine taller-than-the-average-human towers made completely out of white bricks manufactured by Lego's Richard Meier division.  At the going rate of about 10 cents a brick, the tab would be a substantial $160,000.  Do you get a big discount on that kind of volume?  Do you get them for free for their PR value?  The press release is silent on such vital matters.
The models were a part of Porous City, a presentation on “ongoing research on the design of skyscrapers and the potential of porosity as a European approach to urban density.”  Shown at the 13th Venice Biennale, the models also were at the center of Porous City: Opening up the Tower, a four-day workshop at Hong Kong's Business of Design Week last December, which brought together architects and students from Hong Kong Polytechnic Institute and the City University of Hong Kong and also featured a lecture by MVRDV's Winy Maas.
This coming March 12-15, the models will move to the MIPIM Innovation Forum in Cannes, poor babies, again as part of presenting MVRDV's recent research on skyscrapers, Maas lecture again included.


Porous City – Open the tower uses Lego towers to explore futuristic concepts of urban design imagined by The Why Factory, a research institute for the city of the future. Nine three-metre high skyscrapers will rise up during the four days of the show, acting as visual support to debates on the new processes and the role of research in Europe’s urban future.

And while we're talking about Legos, the company's Lego Architecture line, created under the supervision of pride-of-Arlington Heights Adam Reed Tucker, has recently issued its model of Le Corbusier's iconic Village Savoye . . . 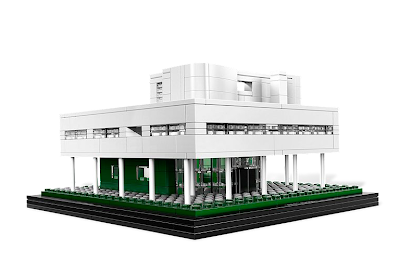 This adds to a collection of kits that includes Frank Lloyd Wright's Robie House, Guggenheim Museum and Falling Water, and Mies van der Rohe's Farnsworth House, among many others. 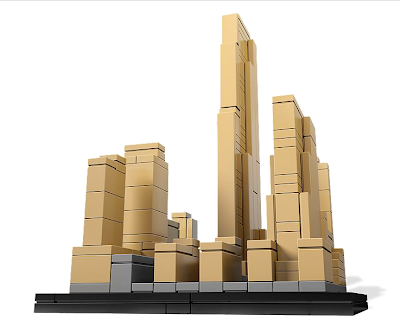 And while we're talking about buildings that look like they were built out of Legos but actually aren't, here's Ricardo Bofill's La Muralla Roja from 1973 (Too bad we never let him build anything this good here). . .
. . . which has the amazing look of a Lego line designed by M.C. Esher.  Now there's a kit I'd buy.