When last we left our traversal of the City of Chicago's plans for finishing the Chicago Riverwalk, we were about to cross under the LaSalle Street bridge.  While design for the three blocks to the east is 90% finished, the final three blocks going west are in a much more preliminary stage, with design listed as only 10% complete.
The first of these blocks, from LaSalle to Wells, is currently called the Swimming Hole, but according to Chicago Department of Transportation Project Manager Michelle Woods, “I've been strongly encouraged to change the name because the Coast Guard thinks people will grab their beach towel and their flip-flops and go for a swim in the river.”

The Swimming Hole is actually a zero-depth fountain that kids could run through.  “This is the block,” says Woods, “that has the most amount of sunlight throughout the day.  This could be a very fun place for families and enjoy a nice day.  There's all kinds of technology and different things you can do so that the floor could look like a dance floor and light up as the water sprays, as the kids run through.  It could light up and interact with the kids climbing on it.”  The concept includes “more robust” bathroom facilities that would include rooms where kids could change in and out of their swimsuits.
In the current, early concepts, the next block, from Wells to Franklin, is called The Jetty.  “It's actually my favorite block,” says Woods.  “It has fishing piers and floating gardens.  Instead of having a concession here, this would be a place I would like to set up as a classroom space and partner with the Chicago Public Schools and the Chicago Park District to have them bring kids to come learn about ecology, water quality and the history of the river, and maybe give them an opportunity to go fishing and enjoy a natural resource in the middle of the city.  At nighttime, this could be a place where we have caterers, maybe have it leased out for corporate events and nighttime activities.  You could have a glass of wine or a beer and wander around onto the fishing piers and enjoy a nice night on the river.”
The final block, from Franklin to Lake Street, is called The Boardwalk.  “This is the section,” says Woods, “where we have a 50-foot buildout, and so we have a lot more space.  The idea originally was let's put some floating gardens in, let's have a nice boardwalk area, a nice public space, right at this big confluence of the river at Wolf Point, where people can hang out and enjoy all the traffic and things going on along the river.”  The rendering depicts an “iconic bridge”, that rises from the river level to Lake Street in a gentle slope.  “This is the section,” says Woods, “where I've been challenged - ‘can you create more retail space here?’, can you do something a little bit more ‘Chicago’, so we're working on that now.”
As we wrote previously, this is one segment where we really need to be seeing some kind of co-ordination between the three major park projects around Wolf Point,  In addition to the Riverwalk, $29 million in TIF funds are going to burying the Metra tracks under a new park along the river at the 45-story River Point office tower rising at 444 West Lake,  At the opposite bank, once the billion dollars of development is completed at Wolf Point, 70% of the site will be parkland, with nearly 900 linear feet of Riverwalk.
Everyone doing their own thing is, of course, a grand Chicago tradition, but you can't help but think that it's taken all of Chicago's 175 history to get to the point of reshaping Wolf Point as a public amenity.  Once the pieces are in place, who knows when we'll have this opportunity again.  Doesn't it just make sense to have all the parties sit down and co-ordinate the vistas and functions?

The ultimate objective is to draw 2.8 million people to the Riverwalk each year.  Woods' presentation compared this to Lincoln Park (3 million visitors annually), New York's High Line (3.7 million), and at 5.1 million, the San Antonio River Walk, the gold standard that Ernie Pyle once referred to as ‘The Venice of America’. 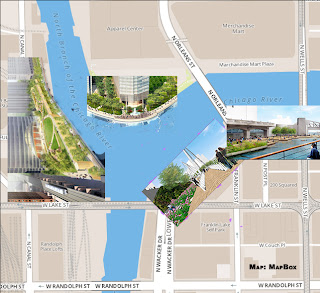 The cost of completing the Chicago Riverwalk is estimated at $90-100 million, with over $3 million already spent on the design.  The city is confident that funding will be available from the Federal Transportation Infrastructure Finance and Innovation Act.  Last year, the U.S. Department of Transportation made available $17 billion in loan guarantees through the program's $1.7 billion in credit assistance.

TIFA would finance the Chicago Riverwalk via a 30-year loan at a reduced rate of interest. The loans, often used for things such as toll roads, require a revenue stream to pay them back.  For the Chicago Riverwalk completion, one proposal is to repay TIFA from a TIF,  with Woods mentioning revenue from the Riverwalk concessions as another possibility.  How many concessions and closings for private parties would you need to come up with the over $3 million a year needed to pay back the loan?  And if all the Riverwalk's revenue went to debt service, where would the money come from for regular maintenance? 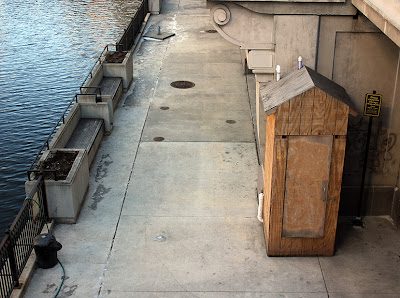 Those are questions that - at least publicly - have yet to be addressed, but the deal may already be near to closing.  In an interview with Tanya Snyder of the DC.StreetsBlog, outgoing U.S. Transportation Secretary Ray LaHood says that a formal announcement may come as early as next month.  If everything goes well, construction could begin this year, with a completion time of 15 to 18 months per block.

Read: Finishing the Chicago Riverwalk
Part One - Introduction and Block One: The Marina
Part Two - Opera on the River? (or Maybe just some jazz)

Oh wow. I gotta check out this San Antonio River Walk. I really love how ours is growing and all the features in it.

Are there urban planning methods that can be used to slow bicycles down?

Spikes? Actually this issue came up at the presentation, so they're aware of the concerns, even if there's no ultimate solution yet.

Just last night I saw a bicycle flying down the ramp near the Vietnam memorial. Someone was sitting on the bench/wall on the ramp with a dog on a leash. The bicycle nearly ran over the dog, and the biker started yelling.

Now I'm not sure if dogs are allowed on the riverwalk (i'm assuming they are if they are leashed), but i'm concerned that bikers are starting to use the riverwalk as their expresslane.

I'm a bicyclist myself, but I know that some areas are walking areas and other areas are biking areas. The riverwalk by the Vietnam Memorial isn't really a biking area.