World's Only Architectural Comedy? A Look at Jacques Tati's Masterpiece: Playtime, Thursday at the Music Box


You have one more chance to see the enthralling Playtime the way it was meant to be seen, in a 70mm print, at the Music Box this Thursday, February 28th.

Not many filmmakers get to build their own city, but that's exactly what French film director Jacques Tati did for his masterpiece, Playtime.  It wasn't the Glory of Rome or Ancient Egypt that Tati reproduced, however, but the perfect modern city of the mid 1960's.  On an open field east of Paris, Tati turned architect and created the urban fragment that came to be known as Tativille, a combination of airport, shops and office blocks all designed in the most perfect shiny emptiness of the late International Style.  It was the most expensive film ever made in France, and it would go on to send Tati into bankruptcy.  And on the site of Tativille, left not a trace behind. 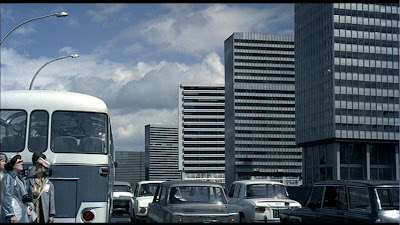 “My job is not to rubbish the architecture,” said Tati in a series of quotes from a number interviews collected on the fabulous Tativille website. “I'm there to try to defend the individual and the personality that is his. ”

For the entire beginning of the film Playtime I direct people so that they are following the guidelines of the architects.  Everyone operates at right angles to the decor, people feel trapped by it.  If M. Hulot comes into a small shop, a haberdasher's say, and drops his umbrella, the haberdasher will say to him ‘Sorry, Sir.  You've dropped your umbrella. - Ah, sorry.’ It's a matter of no importance.  But because of the size of the set, if you drop your umbrella in the hall of Orly, straight away it's a different story. Because everything had been planned and decided on by developers and the architects of the complex so that the umbrella should not be dropped in Orly.  And precisely because of the clatter which a falling umbrella makes in Orly you are guilty of acting in a dangerous manner.  You have become the focus of attention.   The architect might be there, saying his piece, ‘Sir, when we designed this place we didn't envisage you dropping your umbrella.’

In modern architecture an attempt as been made to ensure typists sit perfectly straight and that everyone takes themselves seriously.  Everyone walks around with a briefcase which seems to give them the appearance of being well-informed.  In the first part of the film it's the architecture which is dominant.


The big joke of Playtime is that the generic universal space of modernism engenders an ambiguity so profound as to be unsuitable to the specificity of human life.  The relentless transparency repels occupation - people seem as trapped inside as a deer in headlights - and provides a visual sense of  unity that is ultimately a frustrating illusion.  We encounter this theme very early in the film, when a man with a cigarette leans in towards a security guard to get a light, only to be waved brusquely away.  For a split-second, we think the guard is simply being rude, until we realize  that he's waving the man with the cigarette away because they are on opposite sides of a huge pane of glass. 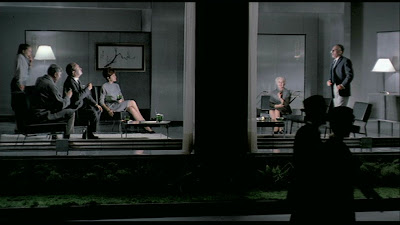 The front end of Playtime is a constantly delightful set of variations on this basic theme, including an extended sequence where two families live out their lives as exposed as on Facebook, in abutting apartments behind huge shop windows that project their every action to passersby as if they were a reality show on a life-sized big screen TV. 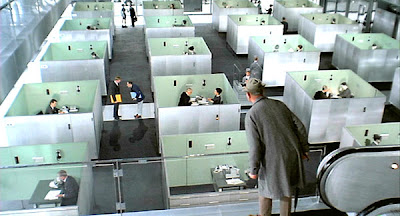 Tati doesn't just get the look of it nailed - his roomful of work cubicles actually is prophetic - but also the acoustics, so often ignored by architects themselves.  From the airy vacuum-quality silence of a glass-sealed room, to the unmistakable sound of a hinged glass door swinging open and closing with a swish of air and a throaty metallic clunk, Tati captures in a way any documentarian would envy the full visceral experience of what it is like to occupy these spaces. 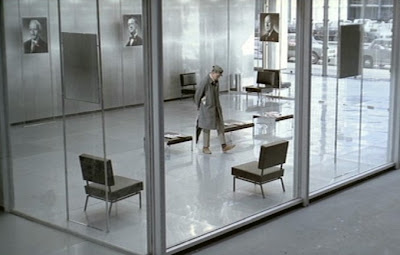 In Playtime's extended finale, the perfect modernism of the earlier film is deconstructed, at an opening night of an ultrachic restaurant.  It is a machine for leisure, in the LeCorbusier sense, but also like an extreme version of LeCorbusier, no one seems to be having much fun.  Then the well-oiled machine starts to break down, and the patrons and staff begin to wreck the perfectly-coiffed interior.

Always, this kind of destructive slapstick in a film is an outburst of brutal rage.  Think Laurel and Hardy, or the Service Station sequence in Mad, Mad World.  It is a cathartic, Dionysian expression of the Id's rawest annihilating power.

In Playtime, in contrast to everything else I've ever seen, the destruction not only liberates, it finds a place of grace. Says Tati . . .


Then, little by little, the warmth, the contract, the friendship, the individual that I am trying to defend begin to take precedence over this international decor.  It's at this point that illuminated advertising begins to appear, things begin to whirl then to dance before ending in a veritable merry-go-round.  No more right angles at the end of the film.

As their elegant surroundings crumble around them, and they become increasingly drunk, staff and guests lose their haughty aloofness, with its implicit boundaries of class, and the restaurant is transformed from a ritual of affluence to a giant, rowdy playground.  It's as if the restaurant itself has grown drunk, and in the process, the design loses its compulsion to control in favor of becoming a reflection of the very flawed human beings it was built for. 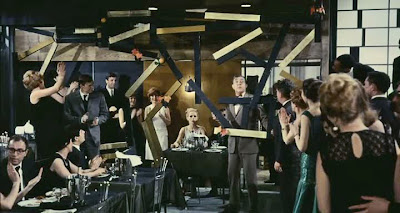 The diners escape the constricted space of their individual booths, where the waiters push the tables back into position to lock them in like a vise. They crowd the dance floor.  They table hop with strangers, and fill up the impromptu bistro that the pushy American sets up under a collapsed wine rack.  The beautiful young girl in the green dress, whom we've followed throughout the film, steps up on a stage that had been abandoned by the band when the ceiling caved in, and begins to play the piano.  M. Hulot brings her a drink, and some food.   A middle-aged woman gets up beside the piano and begins to sing.  Two of the musicians return to join the jam. 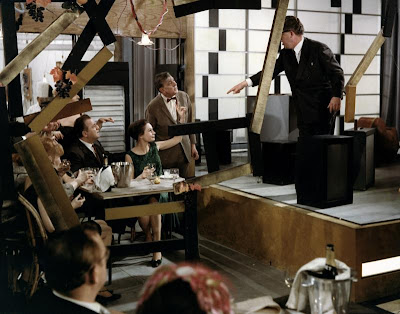 When I first saw the restored Playtime, over ten years ago during it's 70mm debut at the Rubloff Auditorium at the Art Institute, I watched the above scene, like the whole of the film, with more admiration than engagement.  Seeing it again now, it moves me to tears.  More strongly than anything Rem Koolhaas has ever written, Playtime is a manifesto for messiness in architecture