That's the thing about art, you never know when the moment of epiphany will strike.  It has a way of catching you when you least expect.  And then it is something. 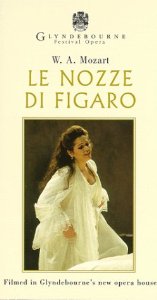 It wasn't until yesterday that I finally came across the production of Mozart/Da Ponte's Le Nozze di Figaro that opened the new theater at Glyndebourne back in 1994, but it's one of the most enthralling opera performances I've ever encountered.

With Bernard Haitink in the pit, and singers like a young Renee Fleming as the Countess, Andreas Schmidt as the Count, and a boyishly handsome Gerald Finley as Figaro, it's beautifully sung and, under Derek Bailey's direction, skillfully acted.  Too often in opera, you get the sense that the singers are just going the motion of establishing characters, but here the acting is natural and unforced.  Rather than a series of disconnected moments within long periods of just standing and singing, here the performers register what appears to be a continuous stream of thought and emotion.  Beyond the beautiful music, you get the sense that something is really at stake dramatically.  Truth be told, I've fallen hopelessly in love with Alison Hagley and her radiant Susanna.

The production, on the surface, could be classified as conservative.  It's not updated - sets and costumes are of the period indicated in the libretto - but it's absolutely modern in its clarity of expression.  There is no clutter.  The sets, by John Gunter, are simple, representational and flexible.  The conclusion of the opera is set in a blue night forest consisting entirely of black shafts bent like the columns of a Koolhaas/Balmond interior (or, alternatively, you could think of them as lingering hair follicles on a balding skull.)(Or not.)

The sequence that took my breath away, however, was the brief transition between scenes in the third act, which you can view at about the 38:00 minute mark in the video below.  (I'm betting it'll convince you to buy the DVD.)


The great march - one of my favorite bits of Mozart -  begins to play, the stage empties except for the seriously conflicted countess and count as they prepare to greet their guests for a double wedding. 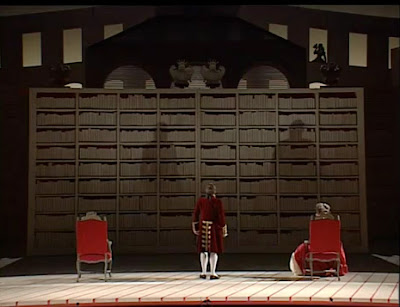 As they take their seats, the back wall, consisting of tall bookbases, splits apart and retreats into the wings, revealing an abstracted facade centered by a classical tripartite portico of three tall, arched openings, covered in screens. 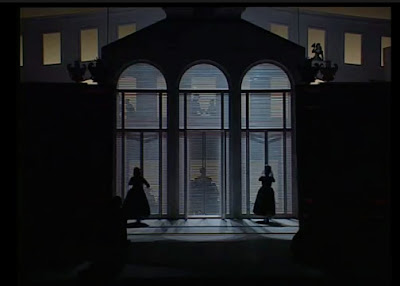 The lighting suddenly cuts to a minimum, cast forward from the back of the stage. 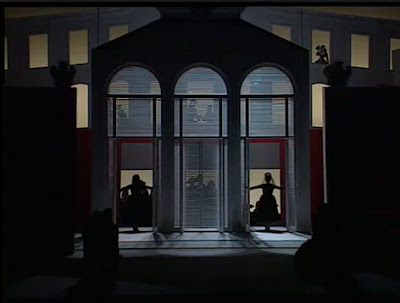 Everything is now in silhouette. Louvers in the arches form a kind of scrim, a play on transparency, a symbol of the storyline's multiple deceptions. From the inside, servant girls walk to each of the outer arches, bow to their masters, and turn to open the set of louvers, revealing a second set of louvers, which they also open.  From the outside, Figaro himself then opens the central louver, at the head of the line of guests as they enter in measured step to the beat of the music, towards shadows cast against a stage floor etched with a grid of thin red diagonal lines, on which count and countess sit in their chairs like points of a triangle.  A play within a play is about to begin.  Confounding their intentions, the players and those they play to are about to become one. 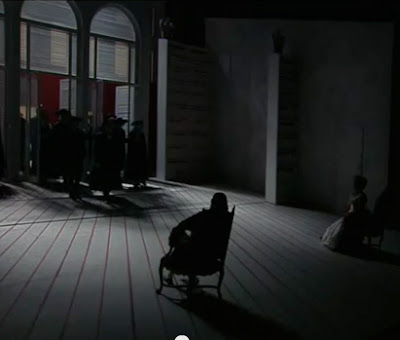 Before and after, the very human characters of this production, principals and extras alike, create a world of conflict, confusion and desire, but in this brief scene, they move with stately formality through a setting of Miesian geometric perfection, softened within the benedicting ether of Mozart's wondrous music, and, for a moment, the abject human condition is elevated into sublime ritual.

The silhouettes emerge into the light to be revealed again as flesh.  The players disperse from  formation.  The action resumes, back into a comedy of bitter pain and desperate longing, on its way to ultimate reconciliation in deepest emotion. 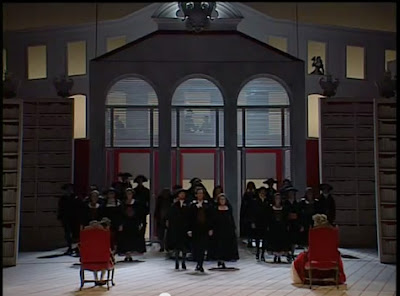