What started as a simple post on the former Allstate building on Chicago's west side has turned into a full-up consideration of one of the most compelling architectural cities in the city.  This is the first of two parts . . .

It's a place where you can read in architecture the entire arc of the 20th century, the former Sears Roebuck complex on Chicago's West side.  It's the story of how an architectural juggernaut arose out the kind of ruthless innovation that builds cities, of its rise to dominance, decline, and fall, and of the unsteady phoenix that now struggles, outcome still uncertain, to rise out of abandoned district time had passed by.

Perhaps the best place start is today, at the 1949 Allstate Headquaters Building.  Located just south of the Eisenhower at 3245 West Arthington, it was the last major structure to be constructed at the complex, and nows stands empty and decaying.  A few weeks ago, Preservation Chicago named it one of its 2013 Chicago Seven list of ‘most endangered buildings’. 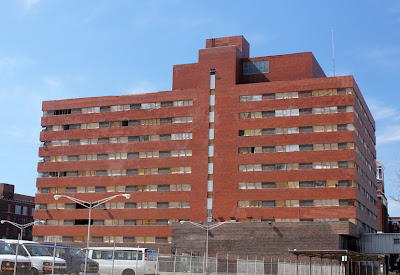 Never heard of it?  Don't be surprised.   Out of sight, out of mind, in a Sears complex that grew out of the residential North Lawndale neighborhood.  It's not a trophy building like the Prudential, or Inland Steel, which followed downtown in 1956, but even in its current, derelict state, it's a beauty.  Not steel and glass, but concrete and two-tones of brick, mediating modernism with the classically-styled original buildings constructed at the Sears complex nearly half a century before. 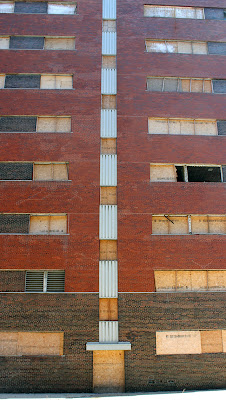 The brick and heavy rectangular massing gives the Allstate a real bulk, while the continuous strips of metal-framed double-hung windows impart a counterpoint of lightness, the brick banding floating above bands of windows that wrap around and dematerialize the corners, holding the entire design in a kind of visual tension that's very powerful. 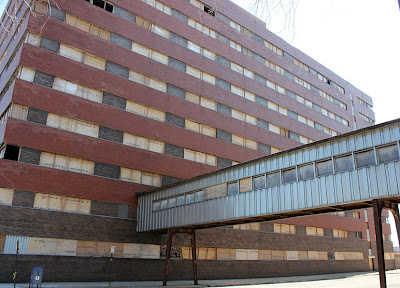 According to Preservation Chicago, the building has been vacant for years.  It's a good thing it's no longer controlled by Allstate, spun off by Sears as a separate company in 1995, because it would probably already be nothing more than a vacant lot.  In  2012, Allstate announced plans to demolish a half-million square foot building on its South Barrington campus.  The year before, it demolished a 430,000 square foot building in Prospect Heights. Back on Arthington, a 2005 plan to convert the building into 238 condominiums went nowhere.
Recently, Crain's Chicago Business reported that the Chicago Public Schools was looking to sell off their current headquarters, the 1907 D.H. Burnham and Company Edison Building, across from Mies' Federal Center.  The Allstate, close to downtown and both the Blue and Pink lines and multiple bus routes, would be a great solution, with Rahm dipping into his infrastructure trust for the rehab.


The Allstate headquarters was the last major building constructed at the Sears complex, a city within a city that helped build the City of the Century, and define the American Century.  Looking at today's Sears - both complex and company - it's hard to imagine that in its time, it was both Amazon and Wal-mart, and as dominant as either.   The true origins of Amazon are not Jeff Bezos, but Julius Rosenwald.  Everything Amazon has done, Sears did a century before, with far less sophisticated technology, with an interface, not of a website, but of catalogues. 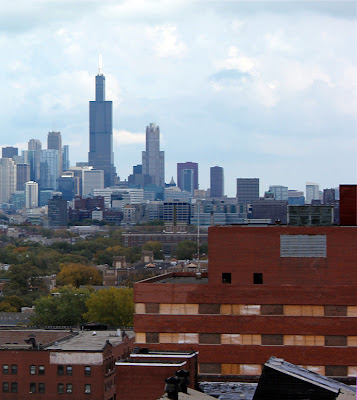 I really like the suggestion that CPS move their headquarters to the old Allstate building. It´s a great way to preserve the building and help out a part of town that needs more development. Who owns the building now? Is CPS seriously looking into moving there?

I hope that this area can be saved,