From Dead People to Hardware: Restoration at the Three Arts Club?

When last we visited the 1914 Holabird and Roche Three Arts Club on Dearborn Parkway. we saw dead people.  Now we see drawer pulls.

The four-story building on North Dearborn Parkway was completed in 1914 to “provide a safe, supporting, and economical residence for young women to study the arts . . . ”  According to Robert Bruegman's invaluable monograph on Holabird and Roche, The Architects and the City, it was the first real work of 27-year-old John A. Holabird, freshly returned from an education at the Ecole des Beaux-Arts and a grand European tour.

Despite its upscale neighborhood, the Three Arts Club was not a lavish structure.  It was pretty much a large sorority house, completed at a modest cost of $200,000.  Its frame was not of steel, but reinforced concrete, with 110 rooms placed around a central courtyard. 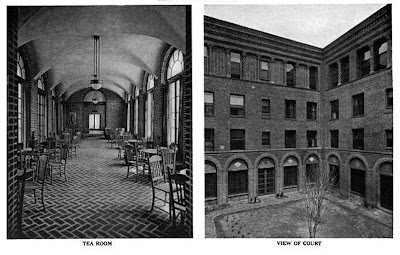 According to Architectural Forum, ”Each studio is provided with running water, so that with a general bath and toilet they may be occupied as bedrooms.  The interior treatment is of the simplest.  The walls are of sand finished plaster with no tint or further treatment and the ceilings are calamined.” 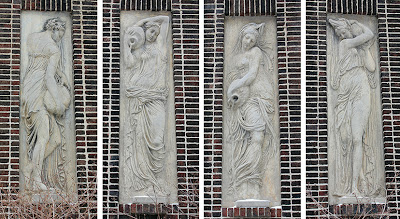 No contemporary artist was burdened in creating the series of reliefs that grace the main facade.  They're actually castings of figures created by sculptor Jean Goujon for the 16th century Fontaine des Innocents in Paris.
Down through the decades, over 13,000 residents passed through the Three Arts Club's doors, until 2003, when financial strains caused the club to evict the last tenants, sell off the building, and convert itself into a grant-making charity.  In the years since, the building has gone through multiple owners and proposals.  It was going to be a 48-root boutique hotel.  It was going to condos.  In 2009, a group of investors wanted to turn the it into a columbarian for up to 15,000 urns.  That idea awakened, not the dead, but the neighbors.  The building remained empty.

Now Curbed Chicago and Crain's Chicago Business are reporting that current owner, DRW Holdings LLC, wants to make the Three Arts Club a showroom outpost for the Restoration Hardware chain, complete with cafe.  The proposal would also encompass restoring windows and terra cotta and making mechanical upgrades to the building, which was designated an official Chicago landmark in 1981. 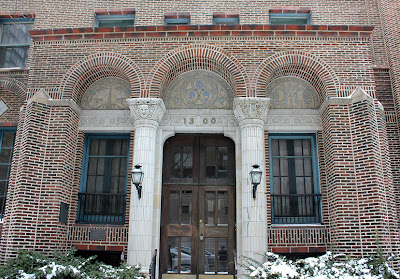 In addition to getting changes past the Landmarks Commission, hurdles include rezoning and getting necessary support from the community and area's new alderman, Robert Fioretti.  This is an overwhelmingly, if not exclusively, a residential district, so it will be interesting to watch how this plays out.

If the Masonic Temple can becoming a Bloomingdale's furniture store, I suppose everything is now fair game.