The Bridge On Beside the River Chicago - Reconstructing Wells Street

It was a slightly surreal sight.  This may be the only time you get to see the Wells Street Bridge running, not over the river, but parallel to it. 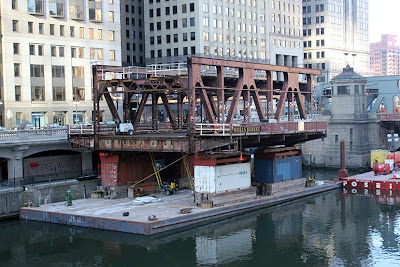 It's all part of a nine-day shutdown of the CTA service over the bridge, whose main span is being completely replaced in two 9-day stretches, between now and March 10 for the south leaf, and again in late April for north.  Here's how it looked before the south leaf was taken out, courtesy of this photograph from our indefatigable correspondent Bob Johnson . . .
The bridge has been closed to vehicular traffic since last November, a project that's expected to last a year. 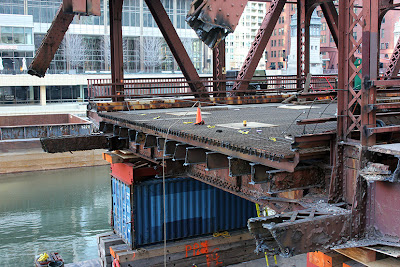 “In nine days,” said Mayor Rahm Emanuel at a Sunday press conference at the site, “we're going to replace  a bridge that was here for the last 90 years.  Warren Harding was President then, and if I can say, not that great a President . . .”

According to the Historic Bridges website, the Wells Street Bridge, whose main span is 268 feet long, was dedicated on February 11, 1922.  Big Bill Thompson was mayor then, and if I can say, not that great a mayor, but for being a buffoon and a boodler and an enabler of Al Capone, he sure built a lot of important stuff.

CDOT Commissioner Gabe Klein noted that the bridge was last rehabbed in the mid-1950's:


Construction crews behind me will replace the trusses and all the steel framing for the lower level roadway and the upper level railway.  Also the guts of it, the mechanical and electric components will also be replaced.  This is a very historic bridge and those elements - the railings, the bridge houses, the major structural components - will be replaced but will retain the 1920's look of this bridge.

We have crews working around the clock, 24 hours on 12 hour shifts on an accelerated construction schedule that's designed to keep CTA service interruptions at a minimum and in fact last night, if you were out here and saw, they actually removed the leaf that they're working on and they're now prepping it to put that new leaf in that's out there on a barge. 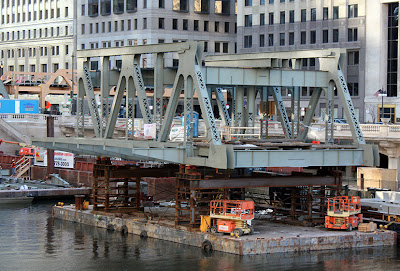 This will actually be the first time that the city has replaced large sections of an active bridge that also carries CTA trains.

When this project is completed at the end of November, we will have extended the life of this critical piece of infrastructure by another 75 years or more.

“This is an incredible feat,” said Klein.  “It's really like performing open heart surgery on a living patient.”  Although trains were still running up to 10:00 p.m. last Friday, the construction crews, as Klein indicated, got the old leaf removed by the end of Saturday.
The project is estimated to cost over $41,000,000.  Between Emanuel, Klein and CTA head Forrest Claypool, also at Sunday's media event, it was mentioned at least three times that the way this is being managed is saving $500,000.  “In the past,” explained Rahm,  “CDOT would have done the bridge; years later the CTA would have done the tracks.”  While Klein and Claypool were both too polite to correct their boss, I get the impression that the mayor may have been winging it here.  If the CTA didn't immediately put their tracks on the rebuilt bridge, how would their trains get across all those ‘years later’?
Claypool offered up the actual source of savings.  “The CTA will be using this opportunity,” he explained, “. . . to do track work here, along the Hubbard curve, as well at Tower 18, at Lake and Wells, where 5 out of every 8 trains in the system travel through each day, so it's a critical juncture for us and is an opportunity to modernize and repair it during this bridge reconstruction .  That will also save the taxpayers half a million dollars by doing the projects at the same time.” 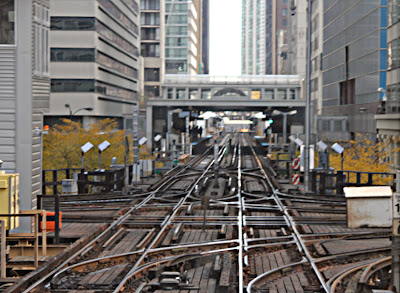 It's also makes for a kind of big mess, especially this weekend and next, when not only the Brown and Purple lines that use Wells Street, but all the other lines - Green, Pink and Orange - using the Loop L will encounter significant obstructions.  Shuttle buses will be in place for Monday's commute.  There are all kinds of interesting variations.  Some Brown Line trains will run in the Red Line subway.  Some trains will terminate at Merchandise Mart.  Some trains will terminate at Chicago. Some trains go nowhere at all - they're just messing with you.  Check out the official CTA bridge-down website and place your bets.

“I'm not minimizing it,” said the Mayor.  “It is going to be an inconvenience .  You can't spin your way out of that.”  He also said it wouldn't stop him from his usual habit from using the CTA to commute to work a couple times a week. 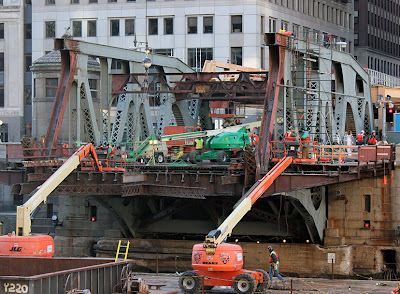 “This is just one project,” said Claypool,  “amid four billion dollars of initiatives that the CTA under Mayor Emanuel's administration in the next few years to reconstruct the system and modernize it.  That includes everything from a new rail fleet to a new bus fleet to eliminating 70% of the slow zones on the system by 2015, which will provide relief to 85% of our riders.”

“We are in the process of now completing 20 million dollars of improvements on the Green Line, repairs and removal of slow zones in anticipation and preparation for the complete rebuilding of the Red Line south beginning in May.  We will be literally building a brand new railroad from 95th street to 22nd street, cutting 20 minutes off the daily commute of south side customers and enhancing service throughout the Red Line and throughout the system.”

Now if we can just get him to do something about all those forward-facing seats.  I'd feel a lot better about my time on the ‘L’ if I wasn't forced to spend it staring into someone's crotch. 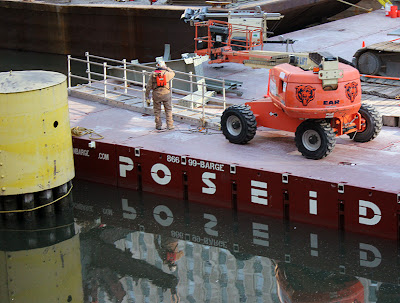 Other current CTA projects include rebuilding Clark and Division, starting construction on a new Green Line stop near McCormick Place designed by Carol Ross Barney, and finishing the plans to replace the current Randolph and Wabash, and Madison and Wabash stops with a single ‘superstation’ at Washington. 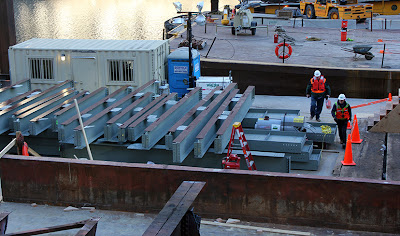 For right now, back at Wells Street, it may be something of a mess, but it sure makes for great urban theater. 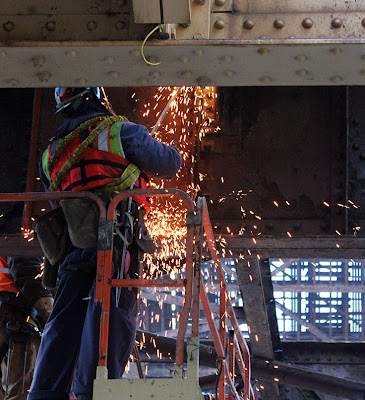 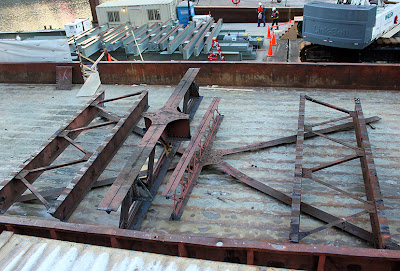 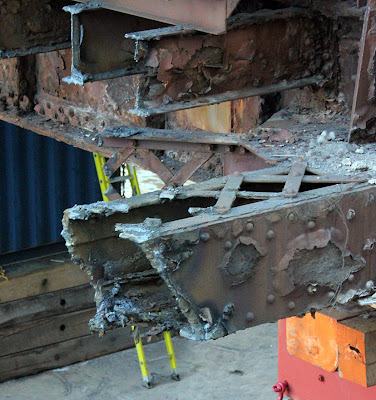 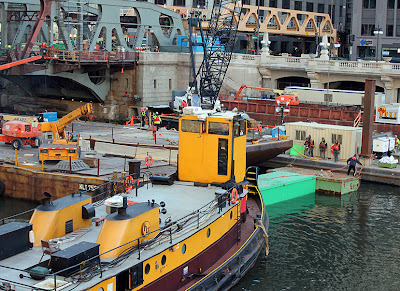 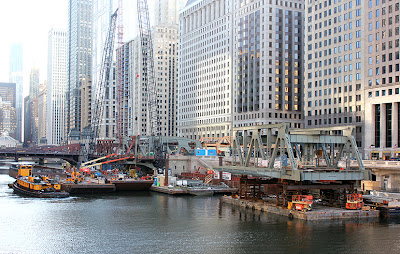 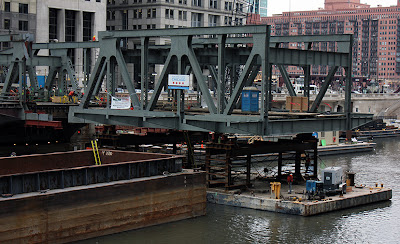 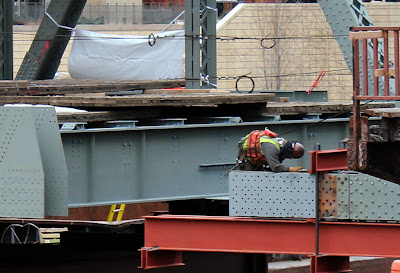 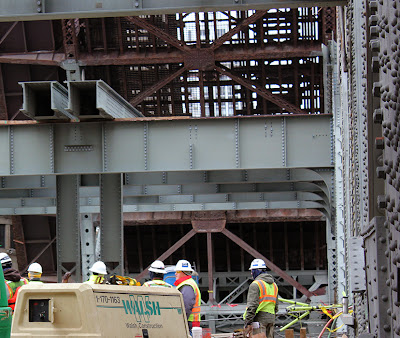 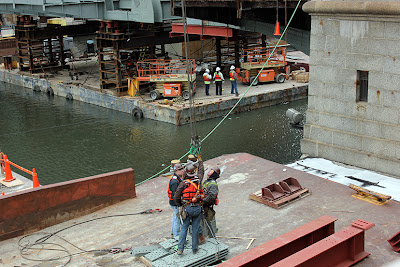 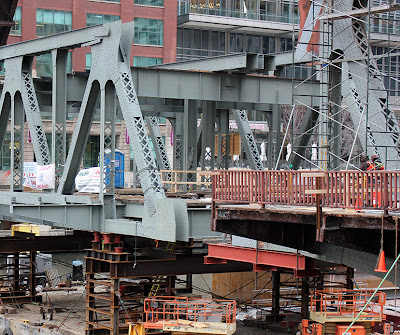 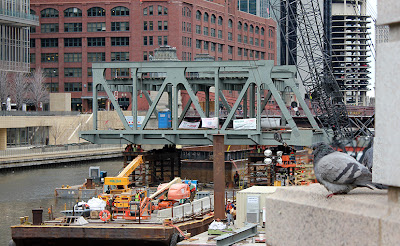