Secretary of the Interior Ken Salazar and Director of the National Park Service Director Jonathan B. Jarvis today announced the designation of 13 new national historic landmarks, including an Alabama bridge that was site of "Bloody Sunday" during the civil rights movement, a 400-year-old historic district showcasing the influence of Spanish culture in Puerto Rico, the home of author and abolitionist Harriet Beecher Stowe, and a historic stadium used by Negro league baseball teams in 20th-century segregated America.
. . .
· Second Presbyterian Church, Chicago, Ill. The Second Presbyterian Church represents the visual and philosophical precepts of the turn of the century Arts and Crafts design movement. Its interior, the masterwork of noted architect Howard Van Doren Shaw, presents some of the finest examples of Arts and Crafts mural painting, sculpture, stained glass and crafting in metals, fabrics, wood and plaster. 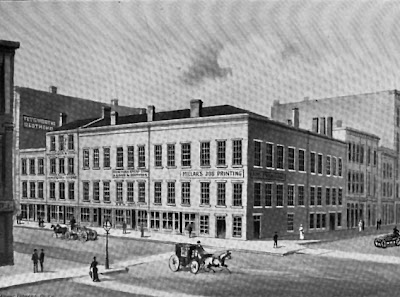 Second Presbyterian was organized in 1842.  Its first meeting was in the City Saloon, but the next year, the church had built its own home on Randolph near Clark. 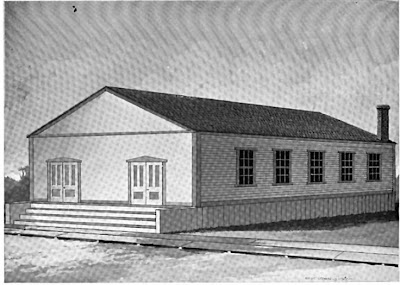 In 1847, the congregation of Second Presbyterian spent $5,000 for a 96 by 171 foot lot at Wabash and Washington, paid for out a subscription of $15,000 for a new building.  After first accepting and then rejecting plans from a Chicago architect, the congregation turned to James Renwick for a new design, to be built, not of brick, but of bituminous limestone, whose discolorations gave the structure its nickname as “The Spotted Church’.  The Gothic style structure, ‘believed to be the first specimen of a pure, simple Gothic structure ever erected in the West,’ was dedicated January 24, 1851, at a final cost of $50,000 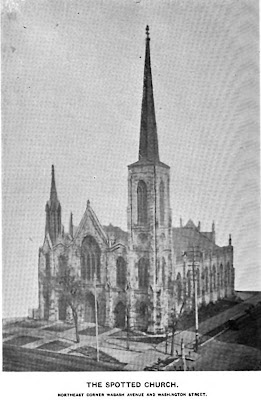 In 1871, just before the Great Fire  that would destroy the church and everything around it, the church, bowing to the commercial encroachment that was sweeping over the central church district, sold the lot for $161,000, and paid $39,000 for a lot at what was then Wabash and 20th, and then exchanged it for another at Michigan and 20th. They collected the insurance on the destroyed church, sold off the stone.

Again Second Presbyterian turned to  James Renwick, Jr., for their new, $360,000 home at what is now 1936 South Michigan, close to the homes of its elite Prairie Avenue congregation, which began worshipping in the still unfinished church January 5th, 1873.
When a 1900 fire destroyed the interior, church member Howard van Doren Shaw was called on to design the renovation.
He partnered with painter Frederic Clay Bartlett to create the current Arts and Craft-styled interior, which includes nine Tiffany stained glass windows, along with work by frequent Louis Sullivan collaborator Louis J. Millet.
“National Historic Landmark” is a higher level of recognition than merely being listed on the National Register of Historic Places, which recognizes structures worthy of preservation and has over a million buildings, 80,000 listed individually.  As of last March, there are only about 2,500 National Historic Landmarks, which recognizes “nationally significant in American history and culture”.
You can read the entire story of Second Presbyterian, complete with floorplans,  renderings and photographs - many in color -in the 78-page National Historic Nomination document here. 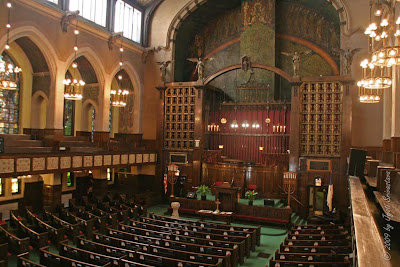 The indispensable Jyoti Srivastava  also has a very extensive set of photographs on Second Presbyterian, including the picture above as well as many detailed shots, in her Cityscape and Architecture website here.
(Click on time for permalink) 1:45 PM

Who is this, Jyoti Srivastava??
Is she or he a professional photographer? petervogt@vogtproductions.com