This is your American Junkie Face on Illinois

The uber-American ‘pause that refreshes’ beside a name that's a play on heroin addiction - what could be more American?  Especially for a corporate franchise that's coming soon to River North, on a vacant lot on Illinois owned by LG Construction and Development. 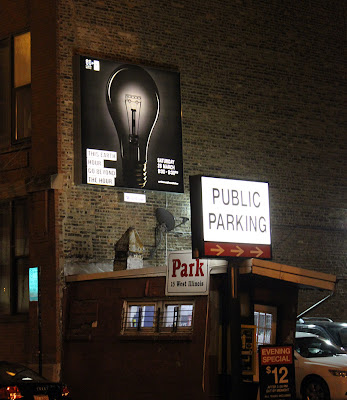 Actually, the leaning shack that used to be here when the site was a surface parking lot would seem to have been a far more accurate representation of the actual drug trade, but the constricted seating capacity probably made it economically unfeasible.

In a comment posted to a January 2012 Crain's story on Chicago's American Junkie, co-owner Bradley Parker said, unlike the Scottsdale, Arizona original, the river north version “will not have the shot wheel or table dancers,” which, according to your point of view, is either reassuring or an  acute disappointment.

Another sign that the Chicago outlet is veering away from the frat house is hiring chef Kendal Duque, whose c.v. includes Everest, Sepia and City Tavern, to design the menu.

How best to take the excitement of an entertainment district out to the street?  Start with vivid signage, loitering and - usually - partial concealment.  You give just enough of a view into the interior to make you want to see more.  Or you can take to the extreme,  as at Untitled on Kinzie, where there is no view in, just two massive unmarked doors. 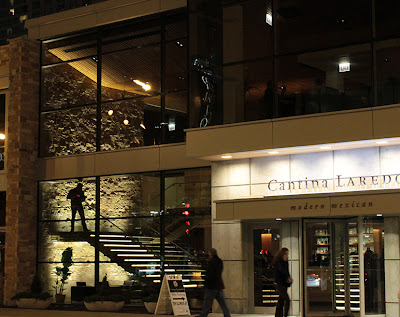 Although River North has been a major dining/bar/club district for a number of years, the individual outposts tended to be inserted behind demure facades.  That began to change two years ago with the opening of the Steven Weiss designed, 450 seat Cantina Laredo, with a glass facade featuring a stage-set quality staircase.  The facade along Illinois may be a mundane throwaway, but along State, Cantina Laredo puts on quite a show,  a welcome bit of transparency theater that energizes the street. 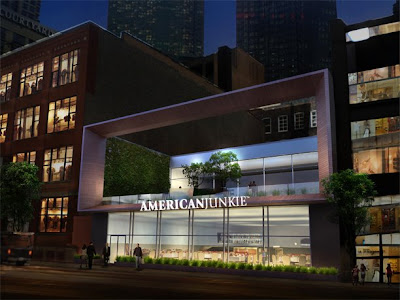 The original rendering for American Junkie promised to up the ante.  The upper level had the appearance of a massive picture frame around what looked to be a open, vertically-landscaped terrace,  encouraging a street voyeurism of the action inside the club.  The reality, alas, looks more like an upscale haberdasher . . . 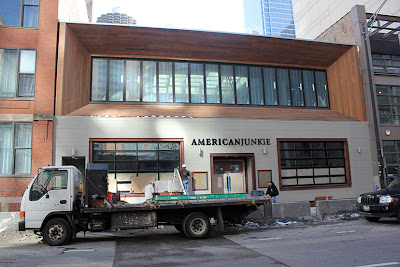 The continuous glazing of the rendering has become inset fenestration, and the inside of that giant frame broken into a neat boring row of 16 relatively narrow windows.   This is what happens when you cut out the table dancers, but who knows? Maybe it will make the movements of the patrons inside look like a Kinetoscope. (In the winter; in warmer weather the windows will be able to folded back.)

You'll soon be able to judge for yourself.  Just not in time for St. Patrick's Day . . . 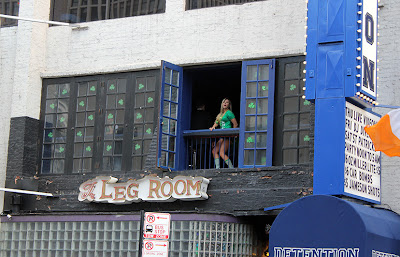 Sometimes less is more.  But I digress.

While, as of this morning March 10th,  their home page still just reads “Opening Soon”, the Eater blog is reporting American Junkie will open March 20th.  It will offer up 400 seats, a retractable roof, and the promise of one of the largest HD video screens in captivity. You can find a lot of construction photos, from start to finish, on American Junkie's Facebook page.  Eater also reports that AJ's two DJ booths will “will pump 100,000 watts of sound into the River North night” and that there will be “American flags seemingly everywhere.”  Patriotism, addiction and thundering music - it's like Apocalypse Now come to River North, but with better food.