Will 130 years of history and faith be destroyed? Friends of Historic St. James rally to forestall wrecking ball.

This Sunday, March 17th, at 10:45 a.m., Friends of Historic St. James will be holding a vigil to support saving this historic Chicago church.  2942 S. Wabash.

On Tuesday, Preservation Chicago released the 2013 edition of its annual list of the Chicago 7 Most Threatened Buildings. As always, it's an interesting mix of the well known - the Lathrop Homes and Century and Consumers Buildings - and neighborhood finds: the Harry Weese bank in clearing, Hotel Guyon, the former Meyers Drug Store in Lake View and the 1949 Allstate Headquarters Building in Lawndale.  We'll probably be writing more about these soon.

But perhaps the most endangered structure on the list is the majestic 1880's St. James Church, at 2942 South Wabash.   If the Chicago Archdiocese's proceeds with its published plans, demolition will begin this coming Monday.  The majestic organ will be dismantled, the church bells stripped and salvaged.  Within two months, nothing will remain of the historic structure but rubble and memories. 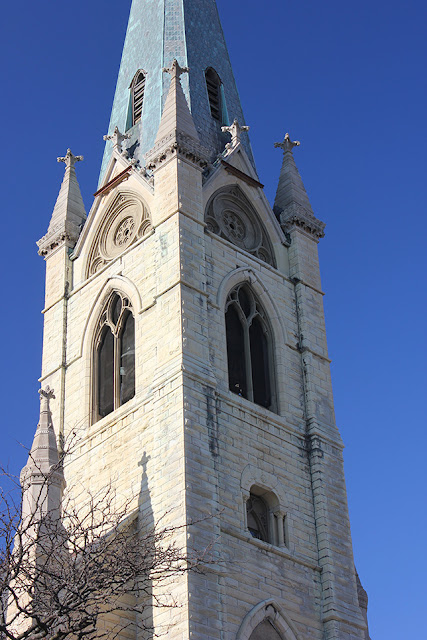 The relationship between the Archdiocese and architecture has been profoundly schizoid.  Time and again, often led by immigrant parishioners,  it has willed into being incredibly beautiful church buildings that are moving symbols of timeless devotion.  Let a neighborhood change, or membership dwindle, however, and the Archdiocese loses all faith in a better future.  Troubled churches are sacrificed to a real estate operation so ruthless it makes Sam Zell look like a gross sentimentalist by comparison.  Tear it down.  Sell it off.  Demolition is the perfect political tool.  It ends the argument with a finality that precludes any future appeal.
Not all unneeded churches merit saving, no matter how old.  St. James does.  The congregation dates back all the way to 1855, and construction on the "new" church back to 1875, just four years after the Great Fire.  The parish was unusually prosperous, to the point where it was debt-free by 1895. The Gothic Revival church designed by Patrick C. Keely, the architect of Holy Name Cathedral, includes  a 200-foot tall bell tower that provides a visual and aural anchor for the surrounding community, even as IIT to the south attempts to cut it off with chain link fencing.  The church originally also had Tiffany windows, destroyed in a 1972 fire.  Although services have not been held in the building for over two years, the now white-painted interior, as seen here in the photos by David Schalliol, still exudes a serene dignity.  The Archdiocese claims to have been spent $1 million on studies proving that  the building is not worth saving, and have worked to speed the process along by letting it deteriorate unabated.
In a last-ditch effort to save the church from destruction, a group of parishioners has formed Friends of Historic St. James Church, with both a website and a Facebook page.  The group disputes the estimate of $12 million to rehabilitate the church that has come from the Archdiocese, which plans to replace it with a new building on a site a block east on Michigan Avenue, at a cost that has varied in different media reports from $4 up to $7 million.
In point of comparison, the Archdiocese was reported by the Chicago Tribune to have gone $6 million into hock to repair structural problems with the roof of Holy Name Cathedral. Work also included repairing damage from a fire that took place during the project, whose $8 million in costs was covered by insurance.  Fading gold leaf was replaced with “a fresh 23-caret coat.”
Time and again, the Archdiocese has had to be dragged kicking and screaming by its own parishioners to take actions that have ultimately proven to be in the church's own best long-term interests.  An under-utilized church today often can see its fortunes completely reversed in just a couple decades.   As recently as 1983, Old St. Pat's was down to four registered members.  Today, it's a thriving center of a rapidly redeveloping West Loop.  In act of astounding myopia, the Archdiocese in 1987 announced its intention to destroy the 1857 Holy Family Church on West Roosevelt.  Fortunately, a popular outcry persuaded them otherwise, and, today, the church unites the strip malls and condo towers of the New West Side with Chicago's long spiritual history.  Last December Holy Family received relics that are said to be fragments from Jesus's manger.
God is eternal; man, mortal.  If you want to be cynical, you could well remark how the the lavish beauty of the great churches is, at least partially, as much a self-tribute to those who built them as they are a devotion to God.  Still, as all our lives are transitory, it it these buildings and these spaces that provide a spiritual continuity down through generations.  In the civic realm, they are the glue that binds communities together, the physical presence that gives each neighborhood its distinctive character.

The area in which St. James finds itself is poised for a resurgence.  Recently, Greg Hinz Crain's Chicago Business reported on The hottest urban center in the U.S. - Chicago's mega-Loop, the vital, economically resurgent district that's expanding beyond the old downtown to take in adjacent, often previously distressed neighborhoods.  St. James is within the next potential wave.  What a civic impoverishment it will be if that next cycle of expansion finds only a vacant lot where a 130-year-old  historical landmark stood until only recently - a loss for future gentrifiers to be sure, but even more importantly for long-standing current residents and parishioners, robbed of their heritage.
By the Archdiocese's own numbers, the choice at St. James is between spending $4 to $7 million for a new church, or spending $5 million more to save a historic building that's been a beacon of spirituality across 15 decades representing over two-thirds of Chicago history.  The spiritual damage inflicted by destroying this singular building far eclipses any short-term savings, and it cannot be undone. 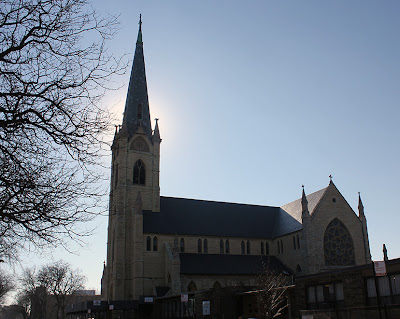 Who in their right mind would even dare to think to tear this church down? The Mayor and Alderman should be standing out there with the protesters.

What a shame. Chicagoan's should be outraged! The people behind this should be told to leave the city and never return.