Is this the tipping point? Will its name soon be the only thing left of the blood and grit of an historic bare-knuckles district of the kind that cities once depended upon to sustain their more elegant veneers? 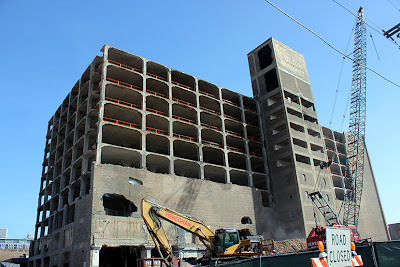 As far back as 2006, the New York Times travel section was touting Chicago's Fulton Market district for its side-by-side clash of meat packers and butter and egg firms that had been there for years with newcomer art galleries and trendy restaurants.  For as long as anyone could remember - since 1920, to be exact - the neighborhood's iconic visual marker was the 12-story tall Fulton Market Cold Storage Warehouse.

The massive building was created by three owners of the 757-room Sherman House Hotel of 1911, which long dominated the block at Clark and Randolph that's now the site of the Thompson Center.  On a full-block site in the Fulton Market district, architect/engineers Gardner and Lindberg designed a $1,250,000 reinforced-concrete structure with soaring, windowless walls trimmed with terra-cotta ornament.  Three different rail lines passed just a block away, with one rail running directly to the warehouse's receiving area.  The facility . . .


was opened in a most auspicious manner Tuesday, October 19.  A large representation of the trade with numerous other friends of the company attended and were hospitably entertained at a buffet lunch following which parties were made up and conducted by officials through the spacious building. 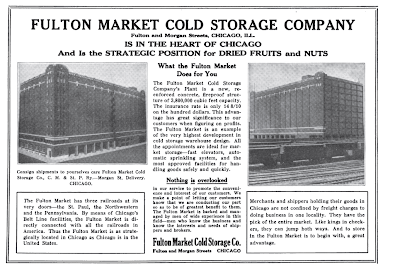 It was originally intended to be just the first part of a $4,500,000 project that would ultimately encompass 10.5 million cubic feet and 888 tons of refrigerating capacity.  That never happened.  A lower, smaller building was eventually constructed to fill out the block, but Fulton Cold Storage's status as the center of the neighborhood remained unchallenged.  According to historian Emily Lambert, “Almost everyone on the street brought product there and stored it when their coolers were full.” 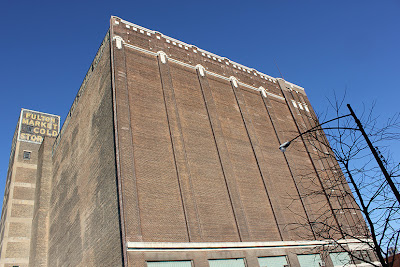 And so, the great behemoth, with its name visible for blocks from the two-story tower at the top, stared down impassive and unmoved as one successive generation after another came, and then went.  Until 2011.  It was then that the building's owner Amit Hasak saw the writing on the refrigerated wall, and moved his cold storage operations to a more efficient single-story facility in Lyons, selling the Fulton Warehouse to Sterling Bay, a company that was then  making a name for itself by stripping off the facades of  the streamlined former lithography company building at 400 South Jefferson, down to the bare concrete skeleton, and rehabbing and reclading the structure as a new home for Hillshire Brands, the company split off from Sara Lee that was relocating from the suburbs to downtown.
It was a critical and financial triumph for Sterling Bay, which bought 400 South Jefferson for $10 million, spent $50 million on the rehab, and then put it on the market for $100 million - all within little more than a year.  Now Sterling Bay is repeating the process at a far bigger scale, converting Fulton Market Cold Storage to 1K Fulton (a play on the 1000 West Fulton address), “a state-of-the-art LEED certified office and retail building . . . The 10-story building will be annexed by a new six-story structure, creating flexible floor plates ranging from 38,500 to 71,000 square feet.” Column centers are 21 feet, with 12-foot-high ceilings on the top eight floors, and 14 feet on the first and second. Hartshorne Plunkard Architecture are the designers.   Delivery date: 2Q2014.
To start, great timeless cocoons of ice had to be melted down and drained away.  (You can see more remarkable photos of the process on the Perkins+Will blog here.)   Then the crews from Heneghen (We Make Space) Wrecking rolled in to smash away those long-serving battlement-like walls, stripping the building, at least temporarily, down to pure structure. 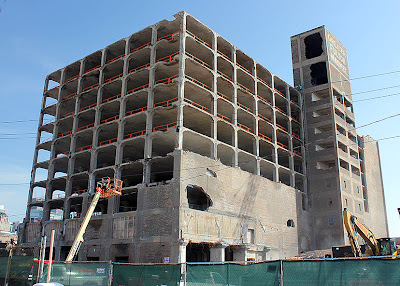 It's an incredible sight.  I'd strongly recommend you get down there to see it before it's covered up again, because, at least on two sides, the new facades, although practical, appear, at least at first glance, not especially inspired.
If you look at the rendering above, the two-story tower has completely disappeared.  On the 1K Fulton website, however, there's a page promoting ‘signage opportunities’ on a rather pathetic, generic-looking stub perched on the roofline.  A bit more exciting is this rendering of the west side of the old warehouse . . .
. . .  encased entirely in glass, linked to the new annex building on what is now the undeveloped half of the block.  If the execution follows the rendering, this transparent wall takes on the appearance of a reliquary putting the whole of the concrete skeleton's perfect geometry on permanent public display. What was once a hidden-away workflow of frozen carcasses in temporary repose dissolves into an epic street theater canvass of warm restless bodies, swaddled in the cells of a seemingly infinite grid of open loft space, bees within a high-tech honeycomb. 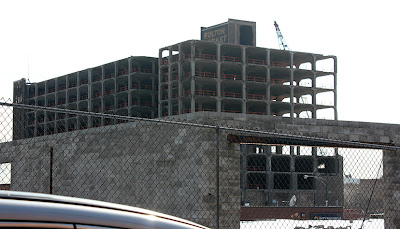 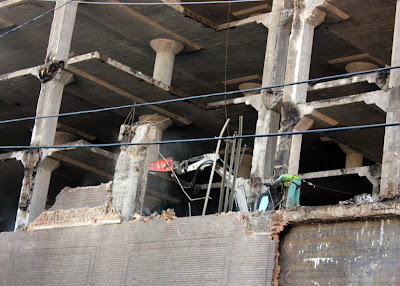 Art Perry said...
This comment has been removed by the author.
10:42 AM

I love the advertisement for the original building opening. I didn't know there were "kings" in "checkers", but I'm sure that's what the merchants and shippers of the gilded age thought they were!

Thank you for such a wonderful article - I learned much. By far the most compelling facade will be the north. WOW - fantastic transparency, I am impressed and I can't wait to view it.

I believe that what is listed (and pictured) as the new North glass facade is actually the proposed West facade. It could be the North facade will be glazed in a similar fashion; I just haven't seen a published rendering confirming or refuting that.

I think you are right, anonymous - my sense of direction isn't always the best. the glass facade appears to be on the west. corrected - thanks!

Third try! I am re-posting since my name was truncated. As a regulatory consultant I helped Fulton Market Cold Storage with OSHA, EPA and Illinois Emergency Management Agency (IEMA) compliance from 2000 until 2012. Although the area was a bit gritty and industrial, the people I worked with made the twice monthly trips something I looked forward to. I have some photos taken by the Region V EPA during one of their inspections in 2008 (Fulton passed). If the author if this blog has any interest I can send you the photos. You can find me if you just Google my name. Louis DeFilippi