Parishioners, Preservationists hold Vigil to Save St. James Church as Developer offers to do Rehab for $5 million Archdiocese has earmarked for new church


On Sunday, a hardy bunch of parishioners and preservationists held a vigil in the morning chill, calling on Cardinal George and the Chicago Archdiocese not to go through with their plans to wreck the 130-year-old St. James Church at 2942 South Wabash, one of the few surviving buildings by architect Patrick C. Keely, who also designed Holy Name Cathedral.
There was no indication of a response from the Archdiocese.  A published schedule beginning with the removal of asbestos of from the building as early as today would begin a process concluding with full demolition by mid-June. Update:  here's a great interview the great Rick Kogan did on his WBEZ Afternoon Shift with Dave Samber  (who you hear singing in our video clip) of Polo Cafe, where there are weekly meetings of Friends of Historic St. James every Tuesday at 7:00, and novelist Mary Pat Kelly 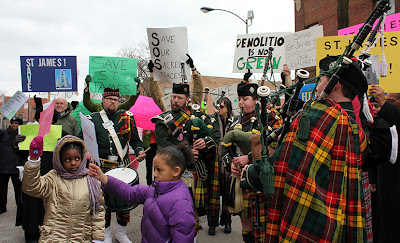 An interesting part of Kogan's interview is Samber talking about an offer from developer Joseph Cacciatore . . .


Joseph Cacciatore, real estate developer, prominent family, and in indeed in this case a Catholic family, has come up with an idea, and he's made a proposal that I understand has been presented to Cardinal George before the conclave even started.

And the proposal is to allow him as a general contractor with his great expertise and resources to come in and for a total price tag, a turnkey, full contract price of $5 million, he will deliver the keys to the church at the end that would be fully acceptable to the city and to the building codes and to the wishes of the congregation in terms of ventilation and air conditioning and he will then, at the time he turns over the keys, write a check for a half million dollars back to the church.

This has just come up.  We are now in the process of trying to figure out how do we raise the four and a half million dollars.  We think it's very doable.

Reports are that the Archdiocese has already pledged $5 to $7 million for construction of a new church on a site on Michigan Avenue a block to the east. 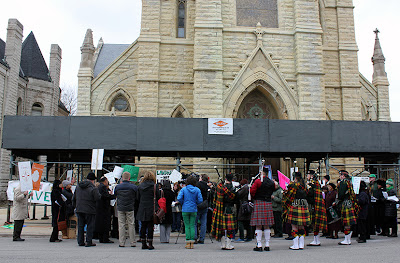 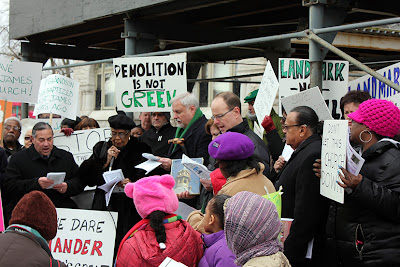 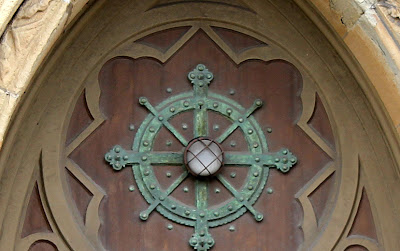 Read:
Will 130 years of history and faith be destroyed? Friends of History St. James rally to forestall wrecking ball.

Anonymous - I am sorry you are writing about this infighting, I'm wondering if you actually go to mass there as the spirit is and has never left the people in there. Many parishioner's #1 goal is to keep this beautiful sanctuary standing where their grandparents, parents, and children have been baptized, married, and some buried, BUT also to do this in a respectville way towards Fr. Edward and folks who may want a new church building. There is an open invitation for all to join this team's weekly meeting at the Polo Cafe in Bridgeport (7pm on Tuesday's). Please feel free to come by. May God continue to guide us through this time of uncertainity.

Thank you for the invitation. I will see what I can do.