As we wrote earlier this week, architect Thomas H. Beeby has received the 2013 Richard H. Driehaus Prize at the University of Notre Dame, “for his lifelong contribution to the human city and classical tradition.”  In the words of the Jury Citation, in the words of Demetri Porphyrios . . . 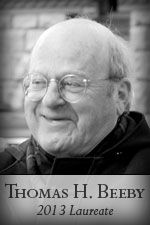 Tom Beeby has been a prolific architect and a much loved teacher.  As Dean of the Yale School of Architecture, between 1985 to 1991, Tom Beeby welcomed the study of history, propriety, character and style in architecture. Indeed, Beeby’s greatest contribution in the world of architecture has been his determination to work and think within the modernist and classical traditions at the same time. As such, he embarked on the journey of reconciling classical humanism with the industrial aesthetic of modernism. In awarding the Driehaus Prize to Tom Beeby, the jury celebrates the work of a dedicated architect and teacher for his lifelong commitment to the search for a common ground between the classical and the modern; the two most powerful architectural ideas of our century.

And while the award is about the classical, the ceremony is anything but elitist.  It is open to the public, and begins at 11:00 a.m. this morning (Saturday, March 23rd).  If last years ceremony, in which the award went to Michael Graves, is any indication, it will be a fascinating event, and an added bonus is the rare opportunity to get inside  Marshall and Fox's 1926 John B. Murphy Auditorium, 50 East Erie.  Architectural historian David Watkin will also be honored by receiving this year's Henry Hope Reed Award.
This Sunday, March 24th, you have one more chance to view the engaging documentary created in conjunction with the award, The Invisible Hand: Architect Thomas Beeby.  It airs at 10:30 p.m. on WTTW, Channel 11. 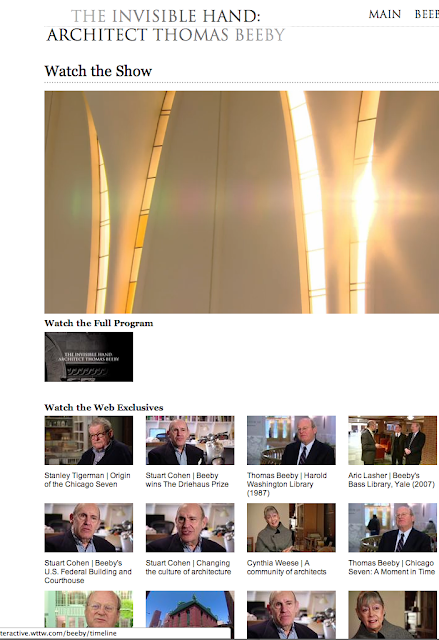 And if that doesn't work for, you can watch the documentary on-line here.  An added bonus of this page is that there's not just the documentary, but a series of shorter outtake videos from interviews with Beeby, Cynthia Weese, Stuart Cohen and Stanley Tigerman, who talks of the 70's group The Chicago Seven, whose stated - and realized - goal was to break that hammerlock of the heirs of Mies on Chicago architecture.  “It's interesting,” recalls Tigerman, ”the Chicago Seven is a group that has virtually nothing in common with each other.” 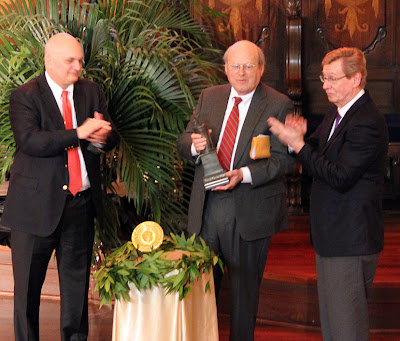