Saturday News: What Would You put under Block 37? Crain's opens up the Hole, and Wants to Know

The bad news: the millions the city dumped into a hole below Block 37 isn't coming back.  That's how much was spent on a "superstation" for a $1 billion express service to O'Hare that didn't exist and had no plan for existing, and a crossover to a Red Line that doesn't serve any airport, in probably the most expensive place in Chicago to do it.   After dumping $218 million into the project, the city decided cost overruns were so out of control the only thing to do was just abandon construction and seal up the whole thing.

The good news:  thanks to Crain's Chicago Business, we now know what our money pit monument looks like.  On Wednesday, Greg Hinz and photographer Stephen Serio (no just handing the reporter an iPhone here) were given the first public access to Mayor Daley's batcave - 472 feet long, 68 feet wide, and an average of 28 feet high.  See all the photo's here.
The fun news: as Mel Brooks will tell you, ridicule is often the best revenge for pain, and Crain's is now offering you the chance to put your best sarcasm to good use  . . .


Calling all architects, designers, urban planners, visionaries! What do you see in that space? Tell us in a paragraph or two, and, because we all know a picture is worth a thousand words, send a rendering, too.

Best of all, there are no prizes and no money, just a promise that the best ideas will be featured in a subsequent article.   Of course, you could play it straight and come up with useful concepts, but why limit yourself?  Submit your most warped concepts to Crain's via email by next Friday, June 21.

Block 37 Sheep Monument to Chicago Taxpayers and Voters:  The space will be fitted out to house a large herd of sheep that will save money by replacing the current expense of mowing with grazing at Millennium and other nearby parks.  The sheep's passivity will commemorate the passivity of Chicago voters in electing and re-electing hacks, autocrats and actual criminals.  Waste from the animals, to be sent to the city's urban farms, will represent the oratory of elected officials, while ceremonial shearings will symbolize what gets done to taxpayers.  The resulting wool will be pulled over our eyes.

Update [6/28/13]: Here's Greg Hinz's follow-up with the proposals he got from local architects, including shown below, Grant Gibson's Embrance the Hubris, keeping the space useless but giving it patterned gilded interior . . . 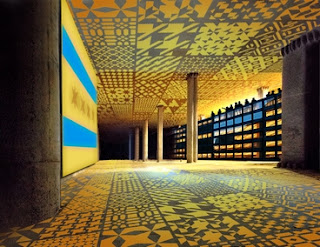 . . . and talking about big abandoned holes and ideas about what to do with them  . . .

Mine the Gap at the Chicago Spire Hole

Tales from the Crypt: City to Bury $300 Million Mistake under Block 37
Can Signage Save Block 37?
Block 37 - The Curse Lives!
The Entombment of the Plug Bug
Planning and its Disconnects: The Cautionary Tale of Block 37