When last we wrote about Illinois Center, we talked about the the potential of its plaza, one level up, south of Wacker and a half-block behind Michigan Avenue.  It's the public space around Illinois Center One, designed by the Office of Mies van der Rohe and completed in 1970, and Illinois Center Two, designed by the successor firm of Fujikawa, Conterato, Lohan and Associates and completed in 1972.  Both are currently owned by CommonWealth REIT.  In 2011, on the northern half of the plaza, they replaced the crumbling Miesian-grid paving with a continuous herringbone carpet.  Previously, we wrote about proposal from Hicks Architectural Group to enliven the plaza with a restaurant seating space on the riverfront part of the plaza.  That didn't happen.  But we do have this new furniture . . . 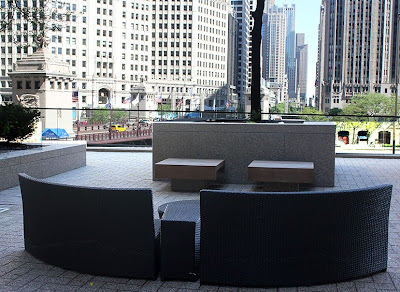 . . .black wicker that feels amazingly similar to the outdoor seating at the new Howells and Hood restaurant at Tribune Tower.  I'm told during the day there are cushions.  The furniture looks a bit lost amidst the empty sweep of the north end of the plaza . . . 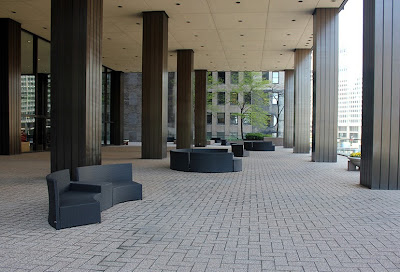 . . . but along the east, the curved seating groups brings a bit of coziness to the severe grandeur of the glass towers. 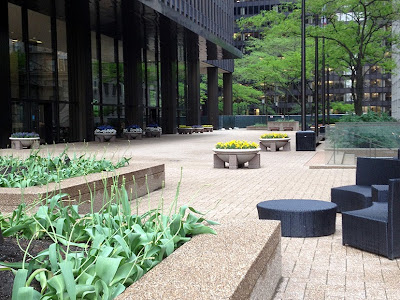 Across from those towers, the plaza's eastern boundary is formed by the soaring, back-alley facades of 333 North Michigan and the Old Republic Building, which face Michigan avenue and were built in the 1920s, when the only thing behind them was the Illinois Center railyards.  Last week, the Permit Review committee of the Commission on Chicago Landmarks considered a proposal to mount louvers and decorative grills on 333's eastern elevation. We weren't able to get to the meeting, and our requests for additional information - or renderings - have been declined.
Now it's the south end of the plaza's turn to be closed off behind chain-link fencing as another rehab is under way.  Again, ownership is as tight as a clam about providing information, so everything we know comes from the banner spread out on the facade.
According to that banner, the project is a collaboration between Goettsch Partners - which recently completed a very handsome redesign of the Wrigley Building Plaza - and Wolff Landscape Architecture.

In 2008, the Chicago Loop Alliance had proposed a Spanish Steps transition at Water Street between Michigan Avenue and Illinois Center's upper plaza. 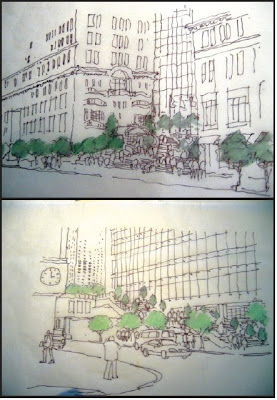 That didn't happen.  In fact, the gracious original stair . . . 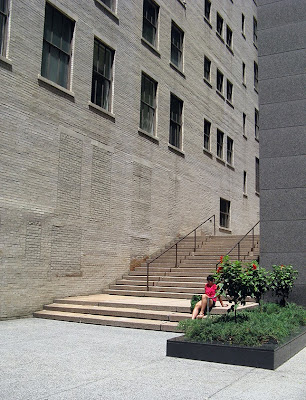 The current rehab re-opens that stair.  As in the riverfront plaza to the north, in the reconstruction of the southern half of the plaza, the Miesian grid of the paving has been expunged, and the base of the right-angled glass boxes enveloped in curving, amoeba-like extrusions of plantings.  At least in the rendering, the monochrome of the structures is set off with bright magenta seating. 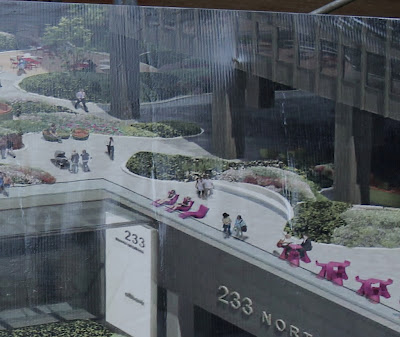 We'll have to wait until 2014 to see how it all works out in reality.  Will sacrificing Miesian purity to a looser, softer design succeed in making the place more contemporary?  Will it allow the plaza to finally achieve its potential as a vital civic gateway to the new East Side? 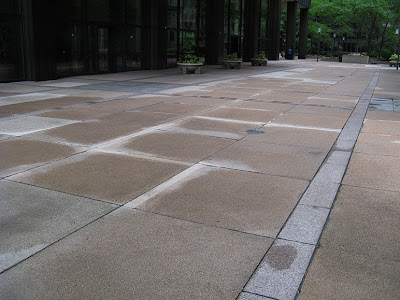 Herringbone floods and the hidden potential of an overlooked Chicago gem. 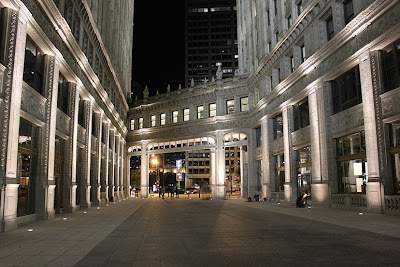 The view out my 14th floor window at the Tribune Tower is smack onto the north area of Illinois Center. From my view, the round couches look nice. I'll bring in my camera with a zoom to snap some shots.

But I have walked around that area, and they do feel completely lost when yo are on the plaza.

Can you ever be critical of Mies? Aren't these dead plazas proof of the failed modernist plaza, to the detriment of most American downtowns no littered with these private, pass-through zone "plazas"?

Have you ever been to Daley Plaza? I'm thinking not, or you wouldn't be making such sweeping statements about "failed modernist plaza"s. The Illinois Center plaza could be just as lively as Daley Center. It's all about building the right links and supporting amenities.

It's about the magnetism of the plaza-adjacent use, whether it be a government building, or similarly, a plaza in the traditional European sense. A plaza at the base of a Mies office building is about the most uninspiring place on the planet and a drop of criticism of the IBM plaza would've shown that. But you're in love.

Obviously, you haven't bothered to read my stories on the IBM. They originally wanted to relate to the river but the Sun-Times effectively controlled the site. Have you never seen the Dominion Centre in Toronto or the Seagram Building? All those people enjoying their plazas apologize for spoiling your thesis.

These sweeping generalizations aren't very helpful. Certainly some of Mies's public spaces are beautifully vibrant and successful, and others are not. This site seems like a case where a large, empty expanse of paving proved a failure, because unlike Seagram, Dominion, or Daley Plaza, this site lacks contiguity with the surrounding streetscape. Perhaps this park-in-a-plaza scheme will prove more appropriate to the site, given its sheltered and somewhat removed nature. Time will tell.

Again, at the time Illinois Center was constructed, there was no streetscape to relate to, which I think is one of the key reason the plaza has been so underused until now, when the new East Side has actually grown up around it.