As you walk through Lincoln Park, south of Diversey, it may seem that Emanuel Swedenborg is turning his back to you, but give him a break.  He's had a rough last 70 years.

Don't know Swedenborg?  Well, he lived from 1688 to 1772, and he was brilliant in fields from physics to geology to anatomy, to name just a few.  Swedenborg, according to one scholar  "ejected the Newtonian concept of permanent, irreducible particles of matter and suggested that everything material was essentially motion arranged in geometric forms."  Swedenborg also believed the Lord God came to him while Swedenborg was dining at a favorite inn, and, after telling him not to eat so much, commanded him to reveal the spiritual meaning of the Bible.  Which Swedenborg did,  in his Arcana Coelestia and 50 massive volumes of writing.


Swedenborg's beliefs both caused him to be accused of being a heretic, and created a theological system that has influenced everyone from Emerson, to Helen Keller, to Jorge Luis Borges.  Daniel Burnham's grandfather was a Swedenborgian minister, and Burnham attended Swendenborgian schools as a child.  Burnham's great Plan of Chicago - and especially the more socially conscious sections deleted from the final draft - can't be fully understood without taking into account Swedenborg's religious doctrines. 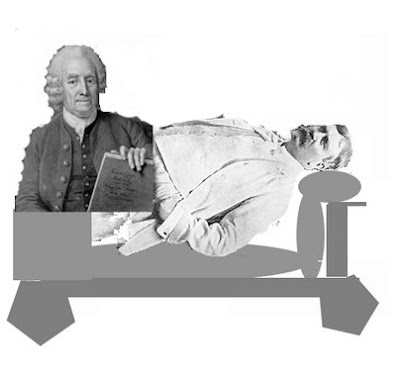 As might be expected, Swedenborg and his "New Church" movement was especially popular among Chicago's burgeoning Swedish population, and it was only logical that Mr. and Mrs. L. Bracken Bishop donated to the city a new bronze casting of a bust of Swedenborg, costing $1,000, by artist Adolff Jonsson, who had studied Swedenborg's skull to help create his artwork.
According to an excellent account on the blog The Stepps of Chicago,  the dedication of the monument on June 28, 1924 was attended by several thousand Swedes, local and imported, including a 1,200 person Swedish chorus that happened to be in town for a Swedish song festival, and a viking ship with singing Valkyries.  (I'm not making this up, you know.)  The bust, set atop a tall granite space, found its home on what was then called Simmonds island, the lakemost section of land between Diversey and Fullerton, which was also home to the 1920 Chicago Daily News Fresh Air Fund Sanitarium, a large part of which now survives as the Theatre on the Lake,
The indignities began in the late 30's, early 1940's, when the charming carriage drive that the monument faced became the expressway called North Lake Shore Drive.  Swedenborg was reduced to watching rushing traffic and inhaling its toxic fumes.  Then, in 1976, he disappeared.  Swedenborg, or, more accurately, his bust, was reported stolen, most probably snatched to be sold for scrap.  His likeness was replaced with a generic pyramid. Oh, and then, just for good measure,  in 2009 a runaway car smashed into the granite pedestal.
In 2006, NewChurchHistory.org began to circulate the story of the sculpture, its origin, life and hard times among Swedenborg supporters,  In 2008, a member of the New Church Society in Stockholm reported that a plaster copy of the bust could be found in the church's attic.  Turns out that this was the model Adolf Jonsson used for the original bronze casting.  (Read Ed Gyllenhall's fascinating report in the July/August 2012 edition of New Church Life, Bronze Bust of  Emannuel Swedenborg Reinstalled in Lincoln Park, Chicago, here (starts on page 391).

The Chicago Park District then began the process of restoring the monument.  Swedish artist Magnus Persson created a new bronze casting of the bust, which was shipped to Chicago in February of this year.  In April, Emanuel Swedenborg, repaired and restored, was again looking out over Lake Shore Drive, a bit too close to guard rail for comfort, no doubt marveling at the evolution in automotive design since his last survey in 1976.

Or maybe he's contemplating his influence on his pupil Daniel Burnham, and on the Plan of Chicago, and the metaphysics of speed, consumerism and sprawl, as he watches the traffic rushing by heedlessly like the "fifteen all-steel coaches" of the limited express of Carl Sandburg's poem, and the joggers running past his back, unseeing, on their distant path.  And he may find himself . . . 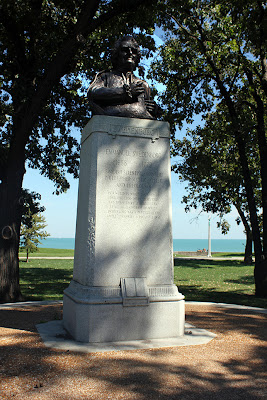