Souls in Flight Amidst the Proud Towers

The heliport atop the recently opened Ann and Robert Lurie Children's Hospital of Chicago, 24 stories and 444-feet-high, has been controversial ever since plans for the new hospital on Chicago Avenue were announced. Even after it was approved last fall by the Illinois Department of Transportation, the Streeterville Organization of Active Residents (SOAR) mounted a last ditch attempt to have the U.S. Department of Transportation block the heliport based on an anonymous letter from pilots claiming it was unsafe. Lurie's counter campaign cited wind studies by RWDI, "the most comprehensive . . . ever conducted by ﻿a hospital heliport applicant in Illinois" and included putting up this video on YouTube.

Before approving the heliport, IDOT also commissioned its own study by Joseph F. Horn and Continuum Dynamics.  While calling for reform of regulations, Chicago Mayor Rahm Emanuel expressed his support of the heliport last December. 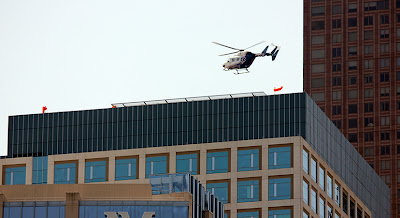 The hospital is publishing regular reports on heliport usage, and for the first two months after the new facility was opened in June, the total number of flights was 20.  The hospital's estimate of the annual number of flights at its former Lincoln Park complex was under 80.  You can see an aerial view of 66-by-66 foot square heliport in this ABC7 Chicago report.


The shots you see here were taken this past Thursday.  A helicopter coming in for a landing on the roof of a tall building between even taller towers in the sea of skyscrapers along Chicago's lakefront is dramatic enough.  When you factor in the factors not only of aviation safety but of knowing the helicopter is transporting either a critically ill child or organs being rushed to a transplant, it pulls back the curtain on the indifferent skyscape of a densely constructed city, and intimates the life-and-death struggles, of both soul and of body, that are often taking place behind the blank facades.