das HAUS to our house (Daley Plaza); plus Frank Lloyd Wright and the Japanese Print. (and - now in its 15th smash month! - no Prentice on Landmarks agenda)

The dance card for September continues to fill. 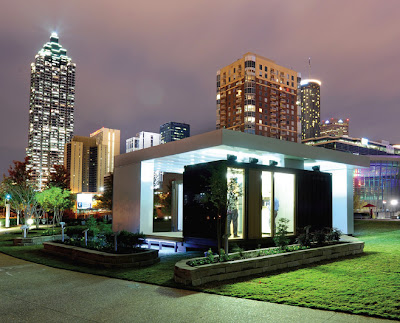 Between Friday, September 21st and Sunday 30th, the Das Haus pavilion will be setting up shop in Chicago's Daley Plaza, part of a twelve-city North American tour..


Das Haus is an exhibition that connects industry professionals in North America with the latest market-ready renewable and energy efficiency solutions from Germany. The project, supported by the German Federal Ministry of Economics and Technology, begins October 2011 and continues on a tour to 12 cities across North America over 13 months. Central to the exhibition is an integrated, fully functioning structure that applies real-world technologies and solutions that meet ultra-low energy building standards

The 10-day stay will include tours, symposiums, seminars and discussions.  We'll bring you more information as it becomes available.

Frank Lloyd Wright and the Japanese Print
We keep adding to the September Calendar of Chicago Architectural Events.  We're now nearing 60 items, and counting.  Plus we've linked to another interesting exhibition at the Art Institute,  The Formation of the Japanese Print Collection at the Art Institute: Frank Lloyd Wright and the Prairie School. which runs through November 4th in Gallery 107, the long print gallery, closed to the corridor, that's on your right after you enter the rooms for Chinese, Japanese and Korean Art.


It was a time when Chicago architects were in thrall to Japonisme, the late 19th-century obsession with art and culture from Japan. It's influence touched fashion, popular culture and music (Gilbert & Sullivan's The Mikado was

first staged in 1885), as well as French impressionist painters such as Monet, Degas and Van Gogh, who painted his own version of two woodprints by the Japanese master Hiroshige.

Wright was a major collector of classic Japanese woodprints, and, like many of his colleagues, a serial visitor to the Ho-o-den, a half-scale reproduction of an ancient Uji temple that was the real-life Mikado's presentation to the 1893 World's Columbian Exposition. Its simplicity and flowing space were qualities that came to characterize Wright's work.

According to Christopher Vernon, who writes of the Griffin's' work in Australia for the Block exhibition's catalogue,

it was another architect, Birch Burdette Long, who brought the Japanese style to the renderings used to depict Wright's buildings. It was Mahony, however, who perfected it. Birmingham describes Mahony's style as “influenced by the sparse detail, continuous line, and skewed perspective and dramatic space of Japanese prints.” The other key element was the increasing importance of landscape, part of the march to an “organic” architecture. Just as Romantic painters were drawn to depicting classical ruins overgrown with vegetation, Mahony's renderings placed buildings within a rich landscape, “sometimes cascading over the floor plans” in her later works.


Wright's collection of Japanese prints led him to be an art dealer.  In those frequent periods when his finances were wanting, the architect could usually raise ready funds through sale of some of his prints even as his advocacy of the art of those prints raised their profile, and, presumably, their sale value.

According to the Art Institute . . .


Over the course of his lifetime, Frank Lloyd Wright consistently lent Japanese prints to the Art Institute, but his most important exhibition was undoubtedly a large show of prints he mounted at the museum in 1908 with an installation of specially designed frames and furniture. For the first time, museum visitors in Chicago were treated to a staggering array of Japanese prints from a variety of artists and time periods. The majority of the works on view were lent by Frank Lloyd Wright himself.

. . . This exhibition is comprised of Japanese prints originally purchased from Frank Lloyd Wright, photos of the 1908 exhibition, as well as presentation drawings by Wright and his studio. Many of the drawings are by talented draftswoman Marion Mahony Griffin and show the incorporation of elements found in Wright’s Japanese prints . . .

I hope to see the show soon, and will report back.

For now, don't forget to check out all the riches on September Calendar of Chicago Architectural Events.

(Spoiler Alert:  Bertrand Goldberg's Prentice Hospital has been kept off the agenda of the Commission on Chicago Landmarks still again.  This Thursday's meeting marks the 15th consecutive month of  the Commission pretending the most pressing landmarks issue in Chicago doesn't exist.)