Instead of gravel and chain-link, the Sound of Crickets on former VA site?

In his newsletter to constituents, 42nd ward alderman Brendan Reilly announced he has concluded negotiations with Northwestern Memorial Hospital for a two-square block Streeterville lot that has remained gravel-surfaced and chain-linked since Schmidt, Garden & Erikson's Lakeside Veterans Hospital was demolished over three years ago. 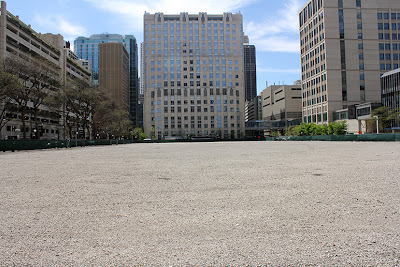 Reilly, also citing support from SOAR (Streetverville Organization of Area Residents), said Northwestern has now agreed to make good on promises made to the Chicago Plan Commission to make upgrades to the site while it awaits future construction.


Alderman Reilly is very pleased to report that his persistence has paid-off. The Alderman believes we have secured a solution that not only requires NMH to deliver on their promise to provide green space on the site, but will also provide some additional streetscape improvements.

NMH will provide a 15-foot setback on the east and west sides of the site - including new wrought iron fencing to secure the entire perimeter as well as new and improved lighting. The interior planting area will include prairie grasses and wild flowers encircled by a sodded perimeter just beyond the fencing. Per the Alderman's request, NMH will also widen and repair the sidewalks on both Fairbanks and McClurg Courts.

Headline is innacurate. NMH (the hospital) owns the lot and is beatufying the lot per your article, not NU (the university), which does not own the lot and is a neighbor.

Before someone yells at me for being pro-University at a time when it's unfavorable, I think they do a great job of landscaping on their property - of particular note are flowers adjacent to inner lake shore drive, in front of the Rubloff Building and Abbot Hall.

I guess I'm confused as what headline you're talking about. Northwestern isn't referenced in the headline of the post.

I agree with you on the landscaping by Abott Hall, which is quite beautiful.