Wrigley Building Plaza: Where Perfect People meet the Rest of Us

If you're wondering about the mix at Wrigley Plaza - people bundled in fall sweaters sharing the sidewalk with young women in summer dresses - step back. 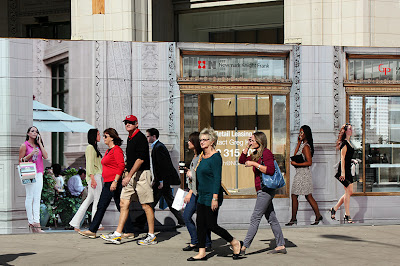 Originally, the plywood barricades that went up for the rehab of the plaza between the Wrigley Building and its northern annex got a rather desultory paint job, but now the one along Michigan Avenue has become an idealized trompe-l'œil duplicate of the actual facade behind it, complete with its own highly selective group of exceptionally attractive and stylish pedestrians blending in with the more realistically imperfect stream of actual passersby. 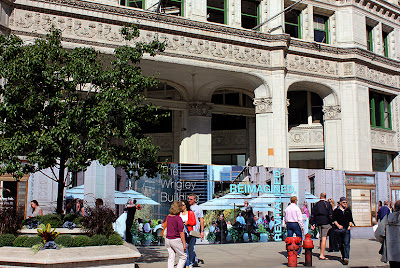 The plaza and its substructure is owned by the City of Chicago, which built it in 1957, when it led to what was still a loft district with a distinctive skid row tinge. Now it's the Mag Mile gateway to the Trump Riverwalk and what's become a booming River North. In exchange for paying for the rehab and assuming the cost of maintenance, the developer, 400-410 N. Michigan Real Estate LLC, gets to call the shots on the use of the space for the next 50 years, subject to city approval. 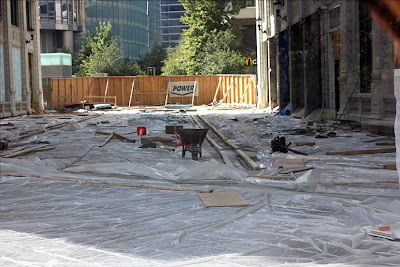 Both the support framing beneath and the plaza itself are undergoing a $2 million rehab, with Goettsch Partners as the project architects for plaza and buildings alike. There's to be new granite pavers, an embedded lighting system. 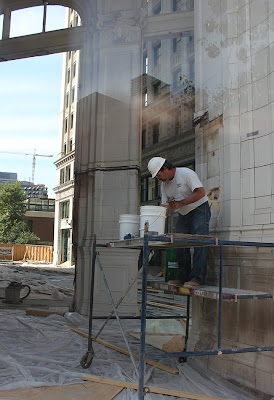 Already stripped away are the cheesy-looking metal storefronts installed in 2010 after Mars took over the Wrigley Company and its iconic buildings, to be replaced with new terra cotta matching the original. The scope of work for the rehab also specifies two new storefronts and doors on both the north and south elevations of the plaza. The "non-historic" infill at the ground level of the breezeway has been demolished, leaving free-standing columns that look like they belong in the aisle of a Baroque cathedral. 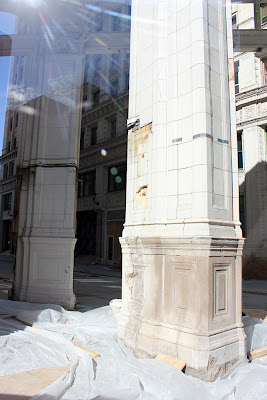 Below is a rendering of the finished design from Goettsch Partners. 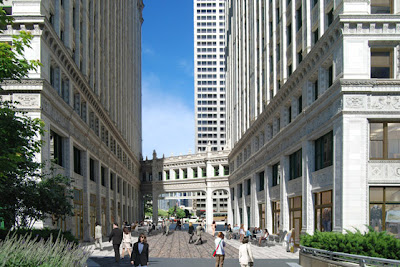 For now, you can actually watch for yourself the process unfold. Real people get to stand next to the fake people, and gaze through a fake shop front that's a real window looking onto the real plaza and its rehab. 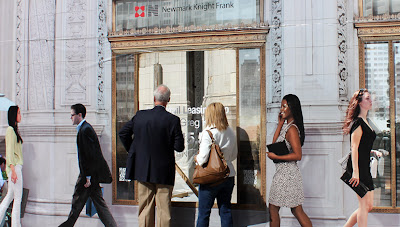 YOU ARE NOT WRONG, LB. THE CH1CKS ON THAT BOARD ARE ON FIRE. I WONDER WHO THOSE GIRLS ARE I WOULD LIKE TO HOLLA AT THEM.

Eric Brightfield said...
This comment has been removed by the author.
2:40 PM