Expo Chicago 2012: Jeanne Gang puts the street grid into Navy Pier (I think the red carpet might be Ogden Avenue)

When he was designing the McCormick Tribune Campus Center on the IIT campus a few years back, architect Rem Koolhaas would often make reference to one of his key inspirations, what he called the "Pompeian carpet": "a continuous tapestry of roles and rooms . . . occupying the largest territory with the least mass, to creative urban liveliness."


For me, it has that kind of beauty of potential focused on the concept and liberation from technique in a certain way, and as part of the repertoire of a single story building, I think that relatively modest sectional variations add . . . a kind of simple but efficient effect.

When the organizers of Expo Chicago 2012, the blockbuster art show setting up shop in Navy Pier's massive Festival Hall later this month, turned to architect Jeanne Gang and her firm Studio/Gang, her inspiration was a more local version of that Pompeian carpet . . .


Inspired by the urban grid of Chicago, the floor plan is patterned after the city’s streets and is lined with galleries to enable visitors to view every gallery in sequence without losing their way. It also gives visitors the option to walk along a diagonal “avenue” to see select exhibits and installations. The street grid is punctuated with plazas and amenities, including a chef’s kitchen, dining space, and lounges. 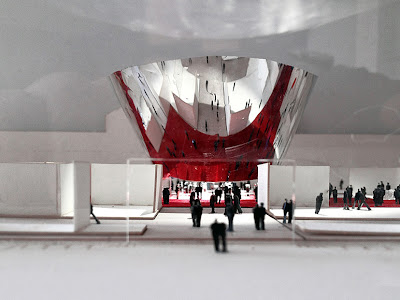 Suspended, mirrored Mylar cones float above the galleries, reflecting the art and activity below while also creating individual, enclosed atmospheres where patrons can rest and socialize. The gargantuan reflective cones orient visitors and add optical highlights to the space.

Last year, Gang teamed up with the National Resources Defense Council to create Reverse Effect, a book that was a compilation of ideas about re-imagining Chicago's waterways.  At Expo Chicago this year, architect/artist Maya Lin has agreed to be the NRDC's featured artist.

“The Chicago River," says Lin in a press release "is such a rich environmental subject, I jumped at the opportunity to be NRDC’s featured artist at EXPO. I have had a long connection with the group and continue to be moved by their important work. It is my belief that visual art can help us all rethink the way we interact with urban waterways, starting in Chicago with one of the most abused rivers in the country. 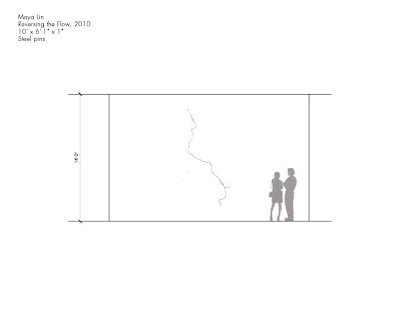 Among the pieces by Lin to be displayed are Reversing the Flow, a topographical map of the Chicago River made entirely of pins, as well as a sound/video installation from What is Missing?,  described as "her final memorial about endangered species and ecosystems."

As an extension of the IN/SITU series of installations of larger-scale works within the Festival Hall, Andrew Rafacz Gallery has also colonized the Chicago Loop Alliance's Pop-Up Art Gallery in the Bruce Graham/Walter Netsch designed Inland Steel Building, featuring Endymion, by Daniel G. Baird, in steel, MDF and porcelain . . . 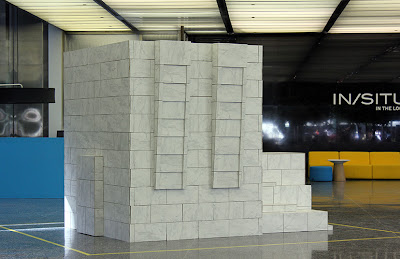 . . . and Susan Giles 27-foot-long Crumpled Spire, in wood.  (or, as I like to call it:  What Never Made it Above Ground, Homage to Kelleher's Calatrava) 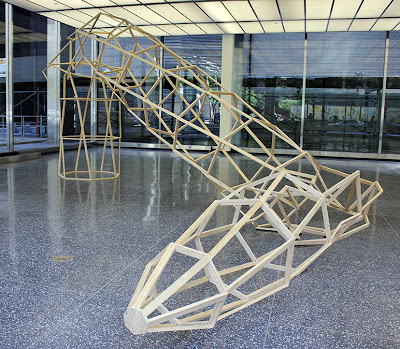 Expo Chicago 2012 is being billed as "the inaugural" edition of what President and Director Tony Karman hopes to be an annual event.  The 2012 version will feature an international roster of 100  galleries and offer a curated blend of contemporary/modern art and design.   It opens Wednesday, September 19 with Vernissage, a preview evening benefiting the Museum of Contemporary Art, and  to the general public, Thursday September 20th through Sunday September 23rd.  For more information, check out the Expo Chicago 2012 website here.