Bjarke Ingels intends to write a thriller built on the unnatural deaths of Antonio Gaudi, Le Corbusier and Louis Kahn, with a climatic chase atop his proposed W57 tower in Manhattan, pictured above.
He is 37 years old.  He is the current pop superstar of global architecture.  His firm is named BIG.  His url is www.big.dk.  His work is confident and unspoiled.  When he thinks of the large projects on his drawing boards, he is haunted by the spectre of Santiago Calatrava's doomed Chicago Spire.  The Lego Towers, the spectacular model for which we wrote about with no small delight when the Graham mounted a great show on Ingels and his firm back in 2008, never got built, but he's found his Herbert Greenwald in Danish developer Per Høpfner.  Ingels is brash and brilliant and he always gets the almond in his rice pudding.  He has many girlfriends.  (And he was always quietly arrayed/And he was always human when he talked/But still he fluttered pulses when he said/"Good-morning"/and he glittered when he walked.)  He loves Charlie Kaufman, particularly the scene in Adaptation where Charlie's supposedly duller twin brother Donald observes, "You are what you love, not what loves you."  All these things and many more I learned in Ian Parker's 14 page, lightly illustrated profile of Ingels in the current New Yorker, which is, unfortunately, not universally available on-line, but worth shelling out the $5.99 if you're not a subscriber. 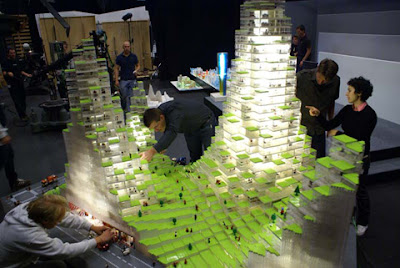