Buzzing the Bridgehouse: Hollywood Star goes behind the Camera at Wabash Avenue Bridge for Dhoom 3

Marina City residents hoping to sleep in Saturday morning got an unexpected wake-up call, courtesy of a Eurocopter N350SC helicopter which made an early morning appearance low on the Chicago river over the Wabash avenue bridge. 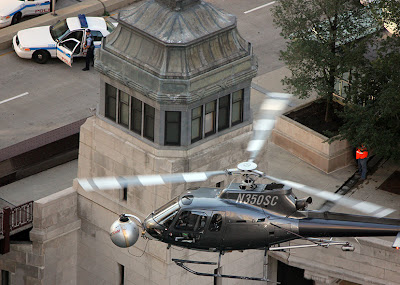 N350SC is a motion picture veteran, co-starring with Bruce Willis in Live Free and Die Hard.
. . . Alan Arkin and Anne Hathaway in the Steve Carrell vehicle Get Smart . . .
. . . and, emblazoned with the singer's name, in a music video for Nelly Furtado's Say It Right.

On Saturday, however, mounted on the N350SC's was a Spacecam steadicam pod . . . 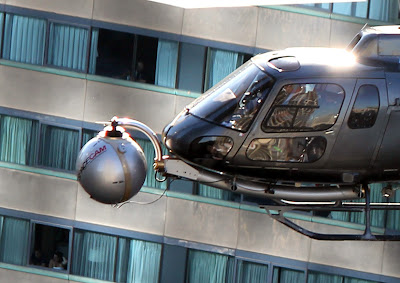 . . . as the copter took shots including actors standing on the approach to the bridge, as actors portraying Chicago's finest (or moonlighting police officers) stood at their squad cars, guns drawn. 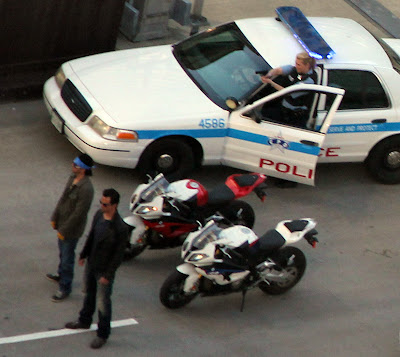 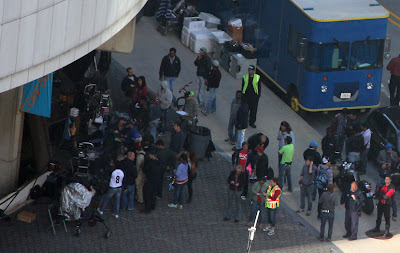 The State Street bridge raised and lowered several times in the course of the filming, which appears to be for the Bollywood action sequel Dhoom 3: Back in Action,  starring Katrina Kaif, Abhishek Bachchan and Aamir Khan, the later two who turned down luxury hotel suites in favor of renting apartments so they could come home to their families during the three-month shoot in Chicago. 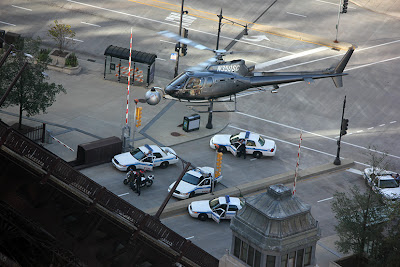 "Don't get me wrong," commented N350SC when asked on the transition from supporting actor to part of the crew, "I love being in front of the camera.  But in movies you're never, ultimately, in control of your own performance.  You're at the mercy of the cinematographer, the editor, the director.  So, no, I don't buy into all those people saying I'm washed up.  Now, I'm the one taking the pictures.  I'm the one pointing the camera, the one in control of the artistic vision.  Except for the pilot.  And the cameraman sitting next to him.  I have to go now." 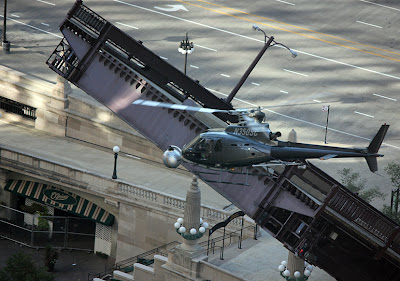