James Cuno wanted to make sure you noticed "the Frank Lloyd Wright red" of the Art Institute of Chicago's new logo.  It was 2008 and Cuno, newly installed as AIC President, was talking to the New York Times about the rebranding effort he had initiated as the museum moved towards the opening the Renzo Piano-designed Modern Wing.

Neither Cuno nor his appointed curator of architecture, Joseph Rosa, wound up sticking around for long.  Cuno now heads up the Getty; Rosa, the University of Michigan Museum of Art.  The logo endures, but the commitment to Wright has its limits.  The Frank Lloyd Wright Foundation announced Tuesday that the massive Wright archives, currently split between the two Wright homes, Taliesen in Wisconsin, and Taliesen West in Arizona,  have now been acquired in a partnership between Columbia University and the Museum of Modern Art in New York. 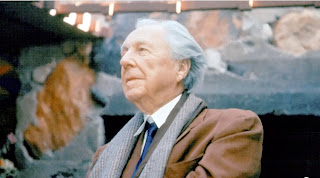 While the Chicago Tribune was satisfied to first post the Reuters report on the announcement, and then a lot less informative rewrite, Crain's Chicago Business's Shia Kapos actually got the obvious questioned answered:  Art Institute passed on Frank Lloyd Wright Collection.  Kapos reports that the museum wanted to pick and choose what it wanted (Prairie School related, it appears) from the massive collection of 23,000 drawings, 44,000 photos, 300,000 (!) letters, models, furniture, and a partridge in a ginko tree.

On one level, the Art Institute's decision is understandable.  I vaguely remember Rosa and/or Cuno talking about how the AIC was going to be more selective in its architectural acquisitions, and how the blunderbuss approach of accepting the entire output of architectural firms had tended to clog up the storerooms with a lot of stuff no one, quite possibly, was ever going to look at again.  There are, after all, only so many Bertrand Goldbergs in the world.

Still, we're talking about Frank Lloyd Wright here, the most blue chip brand in American architecture.  (If you don't believe me, check out the coasters, door mats, baseball caps and condoms on the Shop Wright website.)  If they've passed on Wright, will we ever see the Art Institute acquire a major architect's archives again?  Is Cuno's concept of the Art Institute as an encyclopedic museum mutating, where architecture is concerned, into an abridged version?

I see no comments. Am I the only one furious about this since I reat on Sunday?? Yes, I understand the desire for selectivity; I also understand that as the 21st cent. lengthens, there are more who hardly consider Wright an architectural diety. But if ever an exception should be made for dumpong an entire architectural archive, this is it! This is the heart of the mid-continent meekly acknowledging that records of seminal cultural history CREATED HERE, have no place here. Only NY & LA (the East and the West)matter. I now completely give up on Chicago (once proud-of as my birthplace and home)and its hollow, shallow, short-sighted, no-sighted, backwards, windbag cultural leadership. I used to think Chicago deserved better.
Did I mention that I'm furious about this??

I completely agree. The Wright archives have no business in New York, they belong in the Mid-West. The the east coast was still stuck on the Beaux Arts school when the Mid-West was opening its arms to Sullivan, Wright, and on through the evolution of Modernism. Chicago made a huge mistake.