Buffalo and Chicago: Sister Cities in Architecture and Preservation (But only one has a scorecard)

There are a number of parallels between Buffalo and Chicago.  Buffalo was in incorporated in 1832, Chicago 1837.  Chicago's fortune was made by the railroads and Lake Michigan; Buffalo by the railroads and the Erie Canal.  Both were boom towns in the closing decades of the 19th century.  Both reached their maximum population in the 1950 census.  Both thereafter experienced major population declines, but with Buffalo having by far the worst of it.  While today Chicago retains over 75% of its peak population; Buffalo had lost more than half, accompanied by a major reversals in its foundation industries of shipping, steel making and grain processing.  Neither city has found a long lost monarch buried beneath a parking lot, but Jimmy Hoffa is still out there somewhere.
Buffalo was an Empire city, in 1900 the 8th largest in the country.  President Grover Cleveland was mayor there; William McKinley was assassinated there.  Easy power from the Niagara River brought an early adoption of electricity, leading to Buffalo being known as the “City of Light.”
The other thing Chicago and Buffalo have in common is great architecture, including works by Frank Lloyd Wright, H.H. Richardson and Louis Sullivan.  For a decade and a half afters its completion in 1896, Daniel Burnham's Ellicott Square was the largest building in the world.
The decline in Buffalo's fortunes was accompanied by the usual hits to its architectural legacy.  The process got started early, 1950 to be exact, with the demolition of Frank Lloyd Wright's iconic Larkin Building. 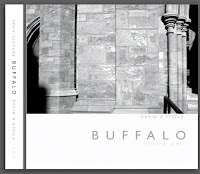 It's been a battle ever since, and in the middle of the fray you can usually find Chicago architect (and Buffalo native) David Steele.  We wrote a few years ago about Steele's excellent book Buffalo: Architecture in the American Forgotten Land (you can still view it on-line), and he's a regular contributor to the Buffalo Rising website.

David has now brought to my attention something preservation has been lacking until now: a good scorecard.  Preservation-Ready Sites' primary purpose is to promote important Buffalo buildings that can still be saved. 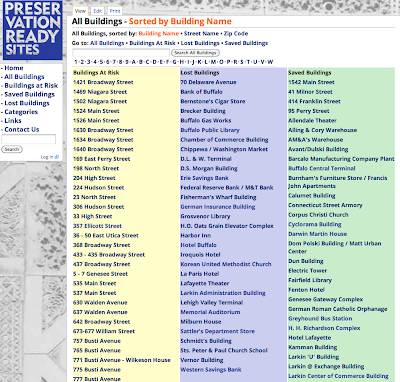 The site also includes, however, a page with three columns: Buildings at Risk, Lost Buildings, Saved Buildings, with links to more information and usually a photograph for each listing.  It's really more of an index than a scoreboard, but it wouldn't take much more effort to add up the totals, perhaps weighted with each structure given a numerical importance, to measure what's been accomplished versus what's still to do.

Of course, Chicago already has its own "preservation-ready" list, the 1995 Chicago Historic Resources Survey, which has no fewer than 17,371 properties (with quite a few more structures built after 1940 or for other reasons that still need to be added).  We also have annual lists of "most at risk" buildings from both Landmarks Illinois and Preservation Chicago.  It's a lot of data.  Would we benefit from having our own scorecard, or would it be more expressive to map out the terrain of Chicago, neighborhood by neighborhood: what is was, what it is, and what it could become, for better or worse?

Fine post as always, Lynn. Would that we had the Larkin Building. I remember, years ago, before information flowed so freely, being in Buffalo and searching everywhere for it. I would not believe that anyone could have torn it down.
Growing up in Chicago, I liked Buffalo in the winter; it seemed the only city in America with weather more harsh than ours.
The Society of Architectural Historians will hold its annual conference this year in Buffalo, in April. Be there! Among other highlights I look forward to seeing Toshiko Mori's 2009 visitor pavilion at FLW's newly restored Darwin D. Martin house. Sublime x 2.

William McKinley was assassinated in Buffalo.

yes, it was actually McKinley who was assassinated in Buffalo, although, in my defense, I think he would have gladly traded places with Harding. Thanks for pointing this out - correction made.

Ah, Someone beat me to McKinley. Filmore was also from Buffalo and Teddy R was inaugurated in Buffalo. How fast we can fall from the heights.

Edward, Look me up on Face Book and I will hook you up with some good people and places in Buffalo.

Also the book is still available in print as well as on the web. You can get it through a link here www.buffbuildings.com

Thanks for the story by the way. This list is just in its infancy and will become more sophisticated and more dense with information over time. The intent is to use it to focus attention and resources on buildings that need to be saved. Too often we only know about a potential loss when the bulldozers show up.

Now we just need to get rid of numbskulls like Mayor Byron Brown, and his cronies, so that they will stop demolishing this glorious architecture everyone keeps marveling over.