Finishing the Chicago Riverwalk, Part Two: Opera on the River? (or Maybe just some Jazz).

This picks up from my first Finishing the Riverwalk post last week to continue westward with City of Chicago's new plan to complete the Chicago Riverwalk along the north bank of the river from State Street to Lake Street, which has remained unfinished since the reconstruction of West Wacker Drive over a decade ago.
In my previous post, I started with the Marina, from State to Dearborn.  Today, we're moving on the The Cove, in the next block, Dearborn to Clark. “This is much more of a family oriented location,” says Chicago Department of Transportation Manager Michelle Woods, who presented the proposals at a public meeting at the Chicago Architecture Foundation last week that also included architect Carol Ross Barney and Sasaki Associates Principal Gina Ford.  “Instead of formal steps going down, this gently slopes down and is like a sand dune kind of experience.  We have native grasses and things that could withstand being flooded and submerged in our 100-year rainstorm.    This could be another great place for people to come and hang out out of the traffic of the main branch of the river.  Maybe we have a kayak concession renting out vessels.  We might have something where people could come and just rent out chairs and sit and have lunch, watching all the activity taking place as the river is floating past them.”
The next block, the River Theater, from Clark to LaSalle, is the one specifically designed to bring together a large number of people either informally or as the audience for programs. “I like to call it Michelle's Woods, ” joked Michelle Woods, “because I'm so humble.  So this is kind of Chicago's Spanish Steps, if you will.  We'll have this great big grand stairwell that comes down to the river, and then gently cutting throughout the stairways is a nice ramp so if you have a wheelchair, or if you have a child in the stroller, you'll be able to come from up to down.  This is a location where we would potentially have the water taxi service or maybe a dinner boat cruise..”

“For those of you who are into landscape architecture, I really like to point out the great job the team did on the tree pits and the tree gates.  This is the first of its kind tree gate - instead of having a typical boxed pit, we're doing trenches, mostly, so it's going to help with the sustainability of the trees over the long term.  You can also see they've cut into the steps for the tree grates to help with the life of the tree.”

It's here where you could imagine audiences gathering for formal programming, and then you have to figure out where you put the performers.  One thing that's missing from the formal CDOT presentations is context.  There are a lot of renderings of what the new installations would look like, and few showing what they're actually looking at on the other side of the river.  In the case of the River Theater, the direct backdrop is the the 1914 Reid Murdoch Building, with its distinctive clock tower. 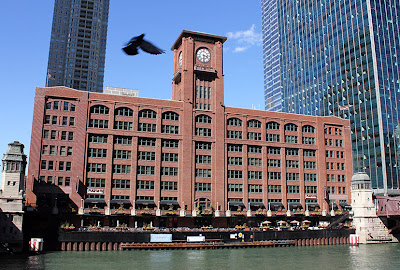 At the Reid Murdoch, the upper level promenade is catwalk-shallow, but there's also a lower level plaza, which has had tables for the Fulton on the River restaurant, which could serve as a stage for the Theater on the other side of the River.  Or maybe you put performers on a floating barge stage. 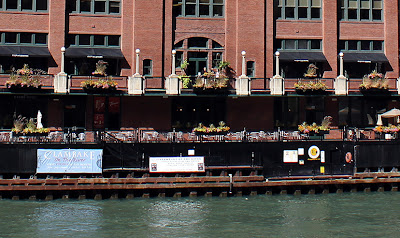 Or maybe one, last Neiman Marcus sized idea . . .
This is a photograph of a production of Giordano's opera Andrea Chénier at the Bregenz Festival, in Austria.   Every two years a stage like this is built above a concrete core in Lake Constance.  The spectacular water bourne sets, of which you can see more here, must be of lightweight construction and capable of being disposed of in an economically sensitive way.  Me, I'm holding out for a Chicago riverfront production of Turandot, with Lisa Madigan as Turandot, Mike Madigan as Altoum, Richard Daley as Timur, Rahm as Calaf, Toni Preckwinkle as Liu, and Ed Burke, Jean-Claude Brizzard and Pat O'Connor as Ping, Pang and Pong.  Costumes by Nick Cave; sets by Jeanne Gang, direction by David Cromer, the Grant Park Symphony and Christopher Bell's Chorus conducted by Carlos Kalmar . . .

Oh, sorry, got a bit carried away for a moment there.  I can just picture the very idea of a floating barge large enough to support an opera sending the Army Corp of Engineers into convulsions, but entertainment on a saner scale isn't only possible; it's already being done.

Last year, or maybe the year before, I was coming home, walking along the north branch by the ABA Tower, when I heard jazz music wafting up in the night air.  Lagniappe, one of the seasonal cafes set up in what under the new proposals is  to be The Cove on the south bank, had blues and jazz nights throughout the summer, and as I listened, I shared the music with an impromptu flotilla of boats hovering on the river around the cafe.  With the music playing out in a soft acoustic like a velvet glove, the traffic moving along Wacker, and the lights of the skyscrapers reflected in the windshields of the boats as they bobbed on the water, it was if the entire river had become a hypnotic music video. 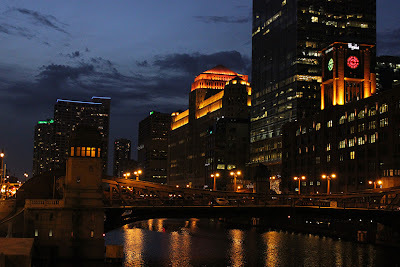 I think the River Theater is a great concept.  Mayor Emanuel apparently thinks so, too, at least according to CDOT Commissioner Gabe Klein, who was at the back of the room for Michelle Woods' presentation last week. “The Mayor and I  both love this one the best,” said Klein, “although I shouldn't speak for him.  For me, I like that it breaks down the barrier between Wacker Drive and the River . . . Right now, there's such a barrier and the contiguous bit is so crucial to the project.  I think the Mayor also likes this because he actually seems the potential for some small performance-type space as well.”  Ballet, we could do ballet, too.  (Actually, the two level promenade and the windows and tower of the Reid Murdoch could make a great setting for choreographers to move their dancers through their patterns.) I am sure that Lake Constance borders on Austria? I thought it was between Germany and Switzerland??

sorry meant to say "are you sure"

My geography skills are less than stellar (sorry, Robert Kaplan), so I turn to Wikipedia, which must be true because it's on the internet, right?

"Bregenz is the capital of Vorarlberg, the westernmost federal state of Austria. The city is located on the eastern shores of Lake Constance, the third-largest freshwater lake in Central Europe, between Switzerland in the west and Germany in the northwest.

I love the staircase leading down to the river. It reminds me of the Veterans Memorial Stairs. Great place to hang out in the summer.

Having theatre on the river is an incredible idea, coupled with the staircase. I hope it happens!

Whereas the idea of dividing the Chicago Rivewalk into unique zones for selling the concept up the foodchain is probably useful, I suspect the visitors will ultimately see it as a singular experience.

What's not coming through for me is what that ultimate experience is intended to be.

I am also concerned about the affects the focus on making the Chicago Riverwalk a visitor destination (analogous if not similar to Millennium Park) are going to be on adjacent urban districts. I read many years ago that as great as San Antonio's Riverwalk was as a destination and image enhancing amenity, it also tended to empty surrounding streets, especially at night. Have these effects been considered?

This is just me, but Michigan Avenue has been Chicago's equivalent to Barcelona's La Ramba for visitors. Perhaps there are now enough local population density and out of town visitor in and around the Loop to support a second great pedestrian destination.

But, if there's not, places like The Magnificent Mile/Millenium Park, State Street and the Randolph Street Theatre District are likely to struggle as result of the Chicago Riverwalk's success. If there is not sufficient foot traffic to support all of these, then all districts, including the Riverwalk, will likely struggle for attention.

The Riverwalk is a great, great idea – in theory. I hope it is in practice as well. And I hope the laws of unintended consequences do not apply here.

And so, my only question is this – how do the Powers That Be expect this new amenity to affect surrounding districts and features in positive and potentially less than positive ways? Or, is this an idea whose time is not quite ripe based on actual marketplace demographics and opportunities?

I realize I sound like a hater. I actually love the Chicago River, and hope the expansion of the Riverwalk is great success. It's implications, however, are quite worrisome...

The third to last paragraph should have read:

"But, if there's not, places like The Magnificent Mile/Millenium Park, State Street and the Randolph Street Theatre District are likely to struggle as result of the Chicago Riverwalk's success. If there is sufficient foot traffic to support all of these, then all districts, will prosper."